Rahul Dravid warmed up for the Test series against Sri Lanka with a fluent 78 as Karnataka first carved out a crucial 106-run first innings lead and then picked two Delhi wickets to stay in the hunt for an outright win in the Ranji Trophy Super League Group B match in New Delhi on Wednesday.

For Delhi, who fielded a second-string squad as most of their frontline players are doing national duty, Sumit Narwal (4/71) and debutant Pawan Suyal (4/67) shared eight wickets.

In their second innings, Delhi were 93 for two at stumps, with Shikhar Dhawan (43 not out) and Rajat Bhatia (28 not out) in the middle.

Resuming at 91 for two, overnight batsmen Dravid and Pawan had contrasting fortunes. Pawan began the day needing 10 runs for his half-century but fell just three short of the mark when Narwal had him caught behind.

Dravid and Balachandra Akhil played with caution, guiding the team past the Delhi total. Just when Dravid looked set for a century, he edged a Parwinder Awane delivery which was safely taken by Puneet Bisht.

In their second innings, Delhi were rocked again when Vinay Kumar trapped Aakash Chopra (6) in the fifth over. Gaurav Chabra (12) too let his team down when Delhi needed him most and fell to Sreenath Aravind.

Mohali: Love Ablish claimed four wickets as Punjab bundled out Hyderabad for 193 to take the vital first innings lead on the second day of their Ranji Trophy Elite Group A match.

Resuming at the overnight score of 12 for one in response to Punjab's modest 221 in the first innings, Hyderabad's batting looked off-colour barring a brave unbeaten knock of 73 by Syed Ahmed Quadri that included ten hits to the fence.

The two overnight batsmen T Suman (17) and Alfred Absolem (8), who came in as night-watchman after Hyderabad lost opener Abhinav Kumar late last evening, failed to occupy the crease for long and fell to Ablish and Harmeet Singh respectively.

Hyderabad's top order failed to impress, with Ambati Rayudu (1) edging one to wicketkeeper Uday Kaul. Skipper VVS Laxman, who was included in the Test squad for the upcoming series against Sri Lanka, failed to make an impact and was trapped leg-before by Ablish on 26.

At one stage, Hyderabad were languishing 89 for seven before Syed's valiant effort helped the visitors near the 200-run mark.

Meanwhile, Punjab's top order once again failed to impress as the hosts slumped to 59 for three in their second innings at stumps on day two.

Opener Sunny Sohal (18), for the second time in the match, failed with the bat as also first innings' top-scorer and last match centurion Ravi Inder Singh (4).

Tamil Nadu off to a good start

Ahmedabad: Murali Vijay celebrated his Test recall with a stroke-filled unbeaten 91 as Tamil Nadu made a strong reply to Gujarat's first innings total of 343 on day two of the Ranji Trophy Super League Group A match.

Resuming at 275 for five, with Parthiv Patel (166) in great form, Gujarat were eyeing a big total but Laxmipathy Balaji (4/51) and Aushik Sriniavas (4/75) ran through the lower half as the hosts managed 68 more runs before folding.

In reply, Tamil Nadu, riding on Vijay's unbeaten 91 and Arun Karthik's sparkling 87, were 198 for two at stumps.

Ovrnight batsmen Parthiv and Timil Patel (24) guided Gujarat past the 300-mark before Srinivas struck twice in quick succession and then Balaji polished off the tail, besides scalping Parthiv's prize wicket, to drop curtains on the Gujarat innings.

Tamil Nadu had a rather wobbly start with Ashraf Makda trapping the Anirudha Srikkanth for a duck with his first delivery.

Murali Vijay and Arun Karthik then held centre stage, adding 187 runs for the second wicket as Gujarat toiled for a breakthrough.

Karthik looked in excellent touch, while Vijay, who was named in the Indian squad for the Test series against Sri Lanka, also found going easy against the Gujarat bowlers.

Thirteen runs from a deserving century, Karthik was foxed by Niraj Patel and returned stumped, having played a brilliant 112-ball knock that had 11 fours and a six in it.

Arindam keeps Bengal in the hunt

Kolkata: Opener Arindam Das cracked an unbeaten fifty as Bengal scored 102 for three in their first innings after dismissing Baroda for 307 on the second day of their Ranji Trophy Super League Group B match.

Das (52) and Sourav Ganguly (15) were at the crease when stumps were drawn at the Eden Gardens.

Earlier, resuming at 216 for six, Baroda lost the wicket of Pathan (43) in the second over of the day and then Pinal Shah (63) also followed suit, leaving the visitors reeling at 248 for eight in 90.2 overs.

Saurasish Lahiri then cleaned up the tail, removing Murtuja Vahora (12) and Firdaush Bhaja (4), as Baroda posted 307 in their first essay.

Mumbai: Persistent rain ensured that no play was possible for the second consecutive day, thereby marring Mumbai's prospects of scoring their first victory, in the Ranji Trophy Super League Group A match against Orissa at the Brabourne stadium.

With only two days of play remaining, a result in this match looks unlikely and both teams will have to slug it out for the first innings lead.

New Delhi: Sarandeep Singh's seven-wicket haul notwithstanding, Railways rode on Sanjib Sanyal's brilliant 92 to post an impressive 419 in their first innings on day two of their Ranji Trophy Super League Group A match against Himachal Pradesh.

In reply, Himachal Pradesh were 34 for no loss at stumps with Bhavni Thakkar (18) and Sangram Singh (14) in the middle.

The indefatigable Sarandeep sent down a staggering 56.3 of the total 158.3 overs to claim seven for 120, his best Ranji figures, while Vikramjeet Malik bagged the three other wickets.

Railways, on their part, did reasonably well to cross the 400-mark, having resumed at 238 for four this morning. Overnight batsman Yere Goud (58) completed a half-century but could not carry on and fell to Malik.

Sanyal joined Akshay Girap (23) in the middle to raise 42 runs with him. Malik dismissed Girap and next man in Mahesh Rawat (1) in quick succession.

Sanyal found an able ally in Karan Sharma (30 not out) and the duo added 45 runs before Sarandeep ran through the lower order, claiming the last three wickets.

Sanyal's splendid 124-ball innings was studded with 13 fours and a six but the batsman was visibly upset at missing a century that looked so imminent. 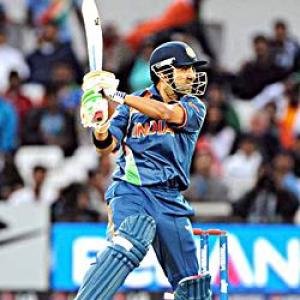 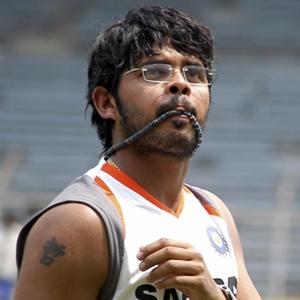