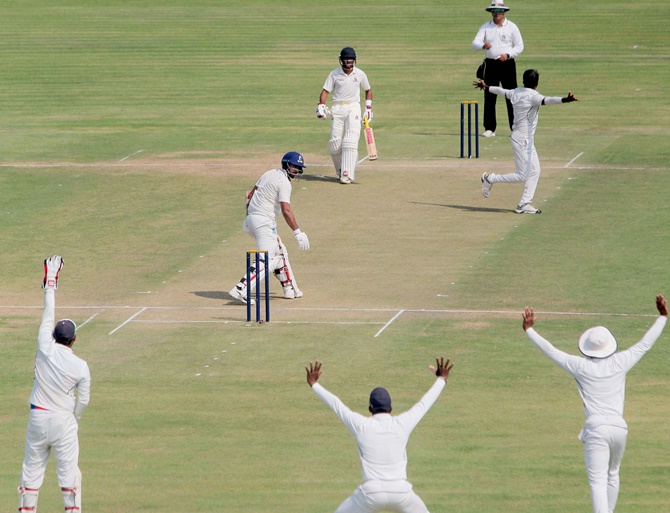 IMAGE: Odisha state players appeal for a wicket during the second quarter-final of Ranji Trophy match against Bengal, in Cuttack. Photograph: PTI

A dogged century by Chirag Jani (121 off 297 balls, 12x4s) and his 157-run seventh-wicket partnership with Perak Mankad (80) helped Saurashtra pile up 419 in the first innings against Andhra on the second day of its Ranji Trophy quarterfinal match, in Ongole, AP, on Friday.

Skipper Jaydev Unadkat removed Andhra opener D B Prasanth (1) and Jyothisaikrishna (17) to leave the host at 40 for two from 22 overs at stumps, still trailing by 379 runs.

Resuming at the overnight score of 226 for six, Jani (on 53) and Mankad (80, 177 balls, 8 fours) frustrated the Andhra bowlers and were still at the crease at lunch.

They defied the attack led by Y Prithvi Raj (3/51) and scored whenever presented with the opportunity.

Jani reached his ton from 249 balls. Though it was a slow knock, it helped Saurashtra recover from 140 for five to post a big score.

This season, Jani has scored 427 runs in eight matches with two centuries and one fifty.

Mankad too complemented Jani well and helped the visitors' cause.

Andhra opener CR Gnaneshwar was batting on 22 at close of play and a lot will depend on him and skipper K S Bharat and Ricky Bhui.

Odisha let the opportunity slip in the final hour, losing three wickets in quick time as Bengal took an upperhand in their Ranji Trophy quarterfinal clash in Tangi, Odisha.

But a lapse in concentration from Samantray, who chased a widish delivery, triggered the collapse as Bengal seamer Nilkantha Das finally ended their dogged 125-run partnership, which came off 317 balls.

Shahbaz Ahmed and Ishan Porel then fired in quick succession as Odisha lost three wickets for 16 runs to end day two on a disappointing 151 for four, still 181 runs behind Bengal.

Bengal's find of the season, all-rounder Shahbaz Ahmed then got into the act, cleaning up the well-set Mishra with a delivery that skidded off rough patches.

The left-arm spinner bowled with drift as the ball skidded from the rough and a clueless Mishra missed the line completely to see his off-stump unsettled.

Bengal immediately brought in their lanky pacer Ishan Porel, who gave the new batsmen duo of Govinda Poddar and night watchman Debabrata Pradhan some anxious moments before dismissing the former.

Porel bowled with pace and bounce and almost dismissed the former Odisha captain Poddar with a yorker but it missed both the pads and stumps.

In his next over, Porel bowled a rising bouncer and Poddar had no answer but to edge it to Anustup Majumdar in the slip cordon.

Other than the final hour's play, it was a frustrating day for Bengal bowlers as they struggled to get any purchase from the flat deck of the DRIEMS College ground here, about 20kms from Cuttack.

Das gave the first breakthrough in the sixth over of the day, dismissing Anurag Sarangi (5) but from thereon Samantray and Mishra, the two leading rungetters of Odisha, took firm control of the proceedings.

Earlier, Bengal's saviour Anustup Majumdar, who revived their innings from 46 for 5 on day one, notched up a career-best 157 after they resumed at 308 for 6.

However, Bengal could not make it big as they loss four wickets for just 30 runs inside 11 overs.

Shahbaz fell at his overnight score of 86 after being castled by Suryakant Pradhan (3/115) before Odisha pace spearhead Basant Mohanty ran through the lower order.

Playing his 100th first class match, Mohanty dismissed Mukesh Kumar and Ishan Porel off successive deliveries before ending the resistance of Majumdar en route to figures of 4 for 53.

Roosh Kalaria scored his third first-class century to propel Gujarat to a mammoth 602 for eight declared against Goa on the second day of their Ranji Trophy quarter-final, in Valsad, Gujarat.

Gujarat pacers then removed both the Goa openers on nought before the visiting team recovered to end the day at 46 for two.

Resuming at the overnight score of 330 for four, the home team suffered two jolts as Goa's right-arm medium-pacer Felix Alemao (3/86) struck with the second new ball, dismissing both the overnight batsmen (Patel and Chirag Gandhi).

While he trapped Gandhi (49) in front of the wicket with a fuller delivery, Alemao also dismissed overnight centurion and rival skipper Parthiv (124).

Parthiv was caught at long-leg off a short ball as Gujarat slipped to 356 for six.

The two wickets gave Goa a chance to fight its way back into the game, but Axar and Kalaria had other plans.

The duo put on 130 runs for the seventh wicket to dash the visiting team's hopes of restricting Gujarat.

The duo hit a flurry of boundaries as Gujarat went to lunch at 375 for six, laying the foundation for a massive score.

However, Axar missed a well-deserved hundred as he became Alemao's third victim, but by then the damage had already been done.

Axar's exit did not affect Kalaria, who notched up a fine hundred, his second at the Sardar Patel stadium here. Gujarat took tea at 576 for seven.

Soon after tea, the hosts declared their innings at 602 for eight after Chintan Gaja (56) was dismissed.

The second day's play in the Ranji Trophy quarterfinal match between Karnataka and Jammu & Kashmir was called off without a ball being bowled because of wet ground conditions in Jammu.

Despite the sun shinning brightly on Friday, water seepage under the covers after last night's downpour left wet patches near the run-up area at one end.

The on-field umpires conducted as many as five inspections before eventually calling off the day's proceedings.

Karnataka were wobbling at 14 for 2 at stumps after only six overs were possible due to bad light on the opening day on Thursday.

Play started after tea and only six overs were possible on the opening day during which Karnataka struggled against Jammu & Kashmir new ball pair of Aquib Nabi (1/6) and Mujtaba Yousuf (1/5).

Karnataka lost both their openers -- Ravikumar Samarth (5) and Devdutt Padikkal (2).

At the close of play, skipper Karun Nair was batting on four in the company of Krishnamurthy Siddharth, who is yet to open his account.