IMAGE: Madhya Pradesh batsman Mihir Hirwani raises his bat after scoring half-century against Mumbai in the Ranji Trophy match at the Wankhede Stadium in Mumbai on Saturday. Photograph: PTI

Jammu and Kashmir made it to the quarter-finals of the Ranji Trophy despite suffering a two-wicket defeat at the hands of Haryana in their final Group C match in Jammu on Saturday.

The Parvez Rasool-led J&K team qualified for the last eight despite the defeat after finishing on top of the group with 39 points.

Odisha also advanced to the knockout stage as the second-placed team from the group, with 38 points, following a draw in their final fixture against Jharkhand.

Resuming at 103 for 5 in pursuit of 224 for a win, Haryana lost the wicket of Ajit Chahal for the addition of only four runs to the overnight score.

Haryana suffered another jolt when captain Harshal Patel (5) was castled by Rasool. Wicketkeeper-batsman Rohit Sharma (75 off 141 balls) then found a resolute partner in Jayant Yadav (13) as the duo added 64 runs for the eighth wicket.

Later, Sharma and Rahul Tewatia (27 not out) put on 44 runs for the ninth wicket to take Haryana home.

However, the win was not enough for Haryana to qualify for the quarters as they finished third in the group behind J&K and Odisha with 36 points.

Jani's knock came as a timely-boost for Saurashtra, as they overhauled Tamil Nadu mammoth first innings total of 424.

Arpit Vasavada made a vital contribution with a valiant 132.

But the final day of the match belonged to Jani, who hammered 10 fours and two other hits over the fence.

Saurashtra, who began the day at 346/6, lost an early wicket when Vasavada was run out by Abhinav Mukund. The hosts then lost Dharmendrasinh Jadeja cheaply on 4 as they were reduced to 368/8, needing another 57 runs to overhaul Tamil Nadu's first-innings total.

Jani found an able allay in captain Jaydev Unadkat (40) as the two added crucial 74-runs for the ninth wicket.

Tamil Nadu which started the 2019-20 season with two straight defeats at home to Karnataka and Himachal Pradesh recovered to an extent to end with two wins and 20 points.

Saurashtra will most likely play Andhra Pradesh in the quarter-final.

The game had little consequence as both teams were already out of the tournament.

This has been the second season when Mumbai have failed to make the knockouts.

Himachal Pradesh finished their Ranji season with a 386-run win against Uttar Pradesh. This was a consolation win for Himachal as they were already out of the running for a place in the last eight.

Andhra qualified for the quarterfinals of the Ranji Trophy despite suffering a crushing eight-wicket defeat at the hands of table-toppers Gujarat in the final Group A match in Nadiad.

Andhra was no match for Gujarat who finished the group stages with 35 points from eight games.

Gujarat, Bengal, Karnataka, Saurashtra and Andhra entered the quarterfinals from Group A and B cross pool, while Jammu and Kashmir and Odisha made it to the knock-out round from Group C.

From the Plate group, Goa secured the berth in the last-eight round.

After being bundled out for 177 in the first innings, Andhra managed just 258 runs in their second essay, setting a meagre 30-run target before Gujarat which they achieved in 9.5 overs for the loss of two wickets.

Resuming at the overnight score of 216 for seven, Andhra added just 42 runs on Saturday before being bowled out in 113.4 overs.

K Karan Shinde (64) top-scored for Andhra in their second innings, while B Sumanth made 47.

Left-arm spinner Axar Patel shone with the ball for Gujarat with impressive figures of 7 for 92.

Meanwhile, the other final round Group A matches between Delhi and Rajasthan and Hyderabad vs Vidarbha ended in draws.

In the quarter-finals to be played from February 20 to 24, Saurashtra will be up against Andhra, Karnataka will face Jammu and Kashmir, Bengal will take on Odisha and Gujarat will square off against Goa. 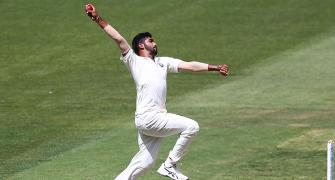