Ranji round up: TN oust Karnataka, champions Mumbai in trouble

Tamil Nadu outclassed Karnataka in a low-scoring encounter, while defending champions Mumbai find themselves in trouble against Hyderabad. A round-up of the Ranji Trophy quarter-final matches: The target of 87 was achieved in 19.3 overs with Karthik, playing his 100th Ranji Trophy game, smashing 41 off 30 balls with five fours and two sixes, in the company of Baba Indrajith, who was unbeaten on 16.

Knowing well that survival on this seaming track was a difficult proposition with Tamil Nadu in trouble at 35 for 3, Karthik let Baba Indrajith hold one end up as he decided to go on the attack and added the required 52 runs in 10 overs. He was severe on leg-spinner Shreyas Gopal, clobbering him for 24 in 2.3 overs.

After 14 wickets tumbled on the first day, the second was no better with as many as 19 dismissals falling by the wayside.

Starting the day on 111 for four, Tamil Nadu lost their six wickets for the addition of 40 runs to be bowled out for 152. They claimed a first innings lead of 64 runs, which proved vital in the final analysis.

After being bowled out for 88 in their first innings, Karnataka once again disappointed with the bat as they managed just 150 with only KL Rahul managing to go past the 20-run mark. The right-handed opener, who smashed 199 in the fifth Test against England in Chennai recently, played a superb innings of 77 from 94 balls, to register the only half-century of the match.

That Rahul was a cut above rest was evident in the manner he handled Tamil Nadu's first innings hero Aswin Crist along with Vignesh and Natarajan.

When Rahul finally edged one to Karthik off Natarajan's bowling, he was the eighth Karnataka batsman to get out for a score of 130.

Karnataka's middle order comprising of India internationals Manish Pandey and Stuart Binny failed to live up to expectations as they both fell without scoring in the second innings.

Karnataka, who looked well placed at 74 for one at one stage, suffered a batting collapse as they lost five wickets for 12 runs to slip to 86 for six.

TN pacer Krishnamoorthy Vignesh claimed 4-53 in the second innings, while left-armer T Natarajan took three for 40 as Karnataka folded for 150 in 38.1 overs after surviving for just 37.1 overs in their first essay.

The big disappointment for Karnataka was the showing of Karun Nair, who stroked a triple hundred in the Chennai Test, as he managed just 14 and 12 in the two innings.

Chennai were missing both their Test stars -- Murali Vijay and Ravichandran Ashwin -- because of injuries but still managed to register a comfortable and storm into the last four stage.

Champions Mumbai in trouble against Hyderabad

Tanmay was unbeaten on 63, while Badrinath made 56 to steer Hyderabad to 167 for three in reply to Mumbai's first innings score of 294.

Tanmay and Badrinath rescued Hyderabad by adding 105 runs together for the third wicket after they were reduced to 30 for two at one stage with Abhishek Nayar (3-26) striking twice.

Nayar added another wicket to his kitty when he saw off Badrinath for a well made 56 off 137 deliveries, which was studded with nine boundaries and a six.

New batsman Bavanaka Sandeep played cautiously in the last session, to remain unbeaten on 10 from 64 balls.

Tanmay also showed a lot of patience during his innings of 63, which came from 223 and included seven hits to the fence.

Earlier, Mumbai, who resumed on 250 for five, suffered a batting collapse as they could add just 44 more runs to their overnight total, while losing five wickets in the process.

Siddesh Lad, unbeaten on 101 overnight, added another nine runs to his personal score before getting out on 110, while Nayar added 13 before being dismissed for 59. 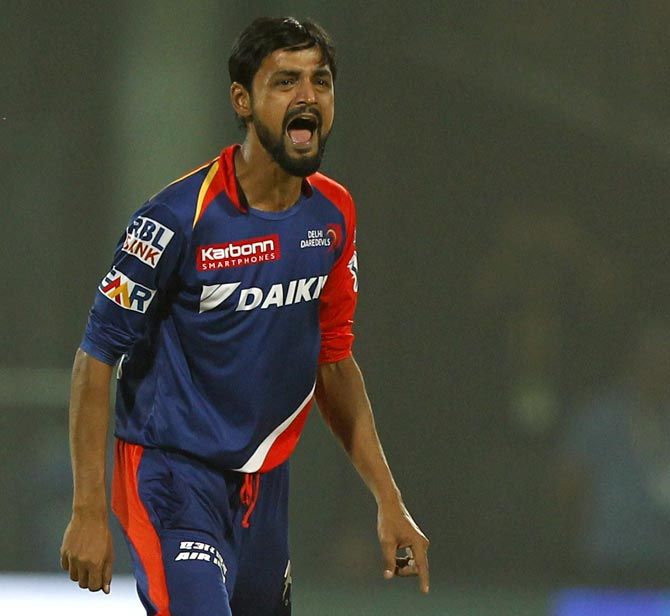 Vadodara: Left-arm spinner Shahbaz Nadeem claimed seven for 79 to put Jharkhand in control against Haryana on the second day of the Ranji Trophy quarter-final match, on Saturday.

Virat Singh (81) and Ishank Jaggi (77) slammed unbeaten half-centuries to steer Jharkhand to 228 for three in their second innings after dismissing Haryana for 258.

At stumps on Day 2, Jharkhand were trailing by 30 runs with seven wickets in hand with two more days to go.

Virat blasted 10 boundaries and a six in his 240-ball innings, while Jaggi hit 11 fours in his 149-ball stay at the Moti Bagh Stadium.

Resuming on their overnight score of 251 for seven, Haryana could add only seven runs, while losing their last three wickets to fold for 258 in 95.3 overs with Nadeem returning with a seven-wicket haul, which included the wickets of overnight batsmen Sanjay Pahal (39) and Harshal Patel (22) this morning.

He ran through the Haryana batting line-up, taking seven for 79 in 33 overs, while Rahul Singh, Anand Singh and Samar Quadri bagged a wicket apiece.

In reply to Haryana's first innings total, Jharkhand were dealt an early blow when opener Anand Singh was caught and bowled by Chahal in the 4th over.

Sumit Kumar (19) and Virat added 37 runs before the former was dismissed by Mishra with wicketkeeper Nitin Saini doing a good work behind the stumps.

Skipper Saurabha Tiwary could score only 23 before he was caught by Rajat Paliwal off medium pacer Patel.

Virat and Jaggi rallied Jharkhand as they put on an unconquered 146-run stand for the fourth wicket and close in on the vital first innings lead.

Bumrah too to hot to handle for Orissa

Resuming the second day on 197 for six, Gujarat saw the lower order make vital contributions to post 263 all out in their first innings. In reply, Orissa were struggling on 184 for eight as Bumrah ran through their batting line-up, taking four for 33 in 21 overs.

Lower order batsmen Chirag Gandhi and Rush Kalaria were instrumental in Gujarat's stunning comeback after they were reduced to 71 for six at one stage. The duo, who scored 81 and 73 respectively, put on 154 runs for the seventh wicket to steer their team to a healthy total.

No. 9 Mehul Patel also chipped in with a vital knock of 28. Basant Mohanty was Orissa's best bowler, claiming five for 68 in 22.4 overs.

In reply, Orissa lost opener Ranjit Singh (1) early before Sandeep Pattnaik (43) and Subhranshu Senapati (30) rallied them with a 82-run stand for the second wicket.

Bumrah then triggered a middle order collapse with the wickets of Senapati, captain Govinda Poddar (0), Abhishek Yadav (8) and Biplab Samantray (0), while Saurabh Rawat was dismissed by Kalaria to leave Orissa reeling on 101 for seven.

Suryakant Pradhan counter-attacked in fine style as he slammed 47 from just 27 balls, hitting two fours and five sixes, to keep Orissa in the contest as he put on 72 runs for the eighth wicket with Deepak Behera, who was unbeaten on 34 at stumps on the second day.

Pradhan's entertaining innings was ended by off-spinner Rujul Bhatt, who had him caught and bowled as Gujarat looked on course to take the first innings lead.