'I have been subjected to a lot of name calling and I have laughed and shrugged it off because I had bigger goals! Affected young, I toughened up because this was never something that would pull me down'

'Fair is not the only lovely or handsome guys! Stay true, stay focussed and be comfortable in your own skin' 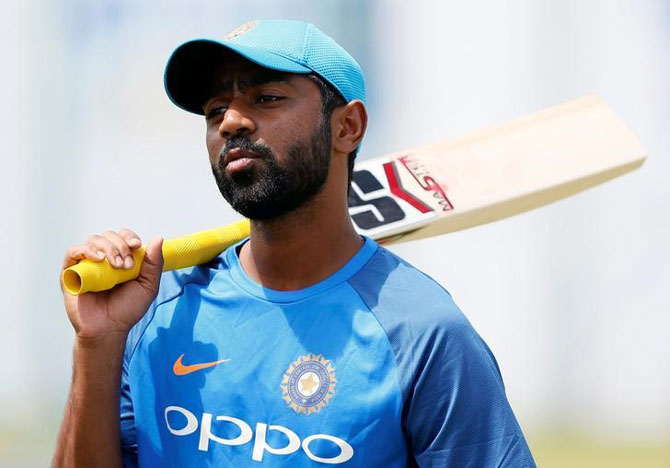 Indian cricketer Abhinav Mukund has slammed racial abuse on social media, saying that he has himself been at the receiving end of insults and ridicule for his skin tone.

In a statement posted on his Twitter page, Mukund, who featured in the first Test against Sri Lanka in the ongoing series and scored 81 in the second innings, expressed his disappointment at some of messages sent to him.

The left-handed Tamil Nadu batsman, however, made it clear that his statement had nothing to do with any member of the Indian cricket team.

"I am writing today not to garner sympathy or attention but with the hope to change the mindset of people on an issue I feel strongly about. I have been travelling a lot within and outside our country since I was 15. Ever since I was young, people's obsession with my skin colour has always been a mystery to me," his statement, posted on Wednesday, read.

"Anyone who follows cricket would understand the obvious. I have played and trained day in and day out in the sun and not even once have I regretted the fact that I have tanned or lost a couple of shades.

"It is simply because I love what I do and I have been able to achieve certain things only because I have spent hours outdoors. I come from Chennai probably one of the hottest places in the country and I have gladly spent most of my adult life in the cricket ground."

Further, the 27-year-old said that he has been subjected to this abuse for long and it has not ended.

"I have been subjected to a lot of name calling and I have laughed and shrugged it off because I had bigger goals! Affected young, I toughened up because this was never something that would pull me down.

"There were many times when I chose not to dignify these insults with responses. Today I am speaking up not just for me but for many from our country who experience ridicule based on the colour of one's skin. Obviously with the rise of social media, it has gone to magnitude that I see people hurling abuses left, right and centre at something I have absolutely no control over!

"Fair is not the only lovely or handsome guys! Stay true, stay focussed and be comfortable in your own skin," he concluded.

His statement evoked strong response from his fans, who praised him for sharing his thoughts on the subject.

In his latest post this morning, the 27-year-old Mukund made it clear that his statement has nothing to do with Indian team.

"Guys please don't turn this into something else, it has absolutely no connection to anyone in the team. It is mainly targeted at people Who have been posting abuses about colour and saying absolutely derogatory things about the tone of my skin. That s all !," he tweeted.

He further appealed, "Please don't turn this into something political, I just wanted to make a positive statement hoping to make a change. That's all." You will have to wait if Ashwin, Jadeja are in the same team: Kuldeep