Images from Day 1 of the second Test between South Africa and India, at the Imperial Wanderers Stadium, in Johannesburg, on Monday. 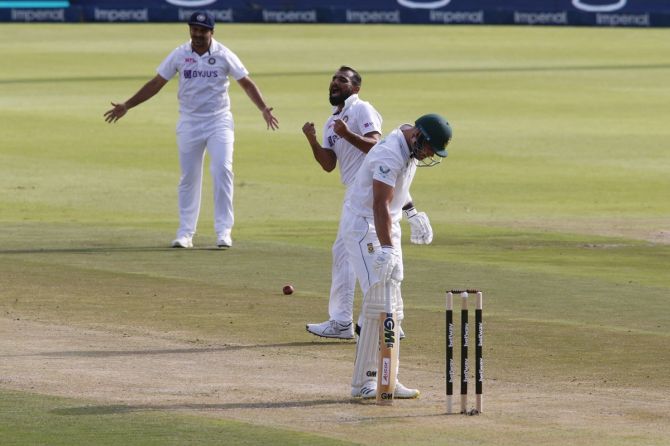 Cheteshwar Pujara and Ajinkya Rahane's saga of failure compounded a shoddy batting performance by India even as stand-in skipper K L Rahul impressed with a defiant show amid the ruins on the opening day of the second Test against South Africa, in Johannesburg, on Monday.

Rahul's patient 50-run knock, on a day when India missed Virat Kohli, who was ruled out of the match due to back spasms, and Ravichandran Ashwin's cavalier 46 at the rear-end of their first innings enabled the visitors post 202 on a bouncy Wanderers track.

In reply, South Africa had a disastrous start as Mohammed Shami trapped Aiden Markram leg before wicket early before Dean Elgar (batting 11) and Keegan Peterson (batting 14) guided the hosts to 35 for 1 at stumps. 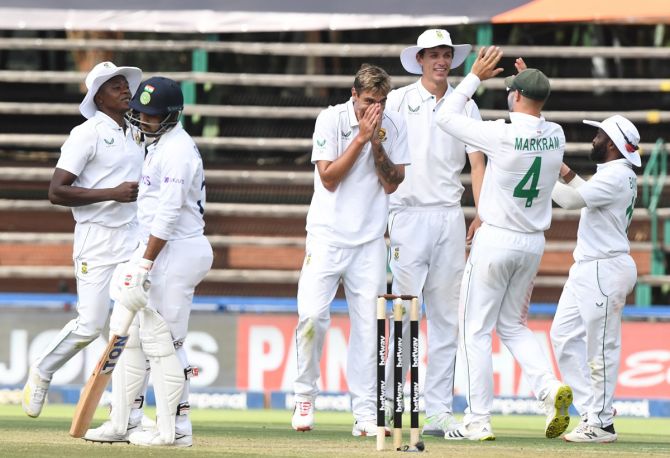 It could have been two down had Rishabh Pant snapped Peterson off Jasprit Bumrah, the catch seeming a regulation one.

Worse, Mohammed Siraj hobbled off with what looked like a hamstring strain. If it's bad news, then India would be left with four bowlers.

However, a lot of blame should go on India's batters, as some, like Pujara, did not show intent to score while others, like Rahane, seemed completely short on confidence.

It prompted the legendary Sunil Gavaskar to say it as it is on air, "I think the next innings will be their last chance." 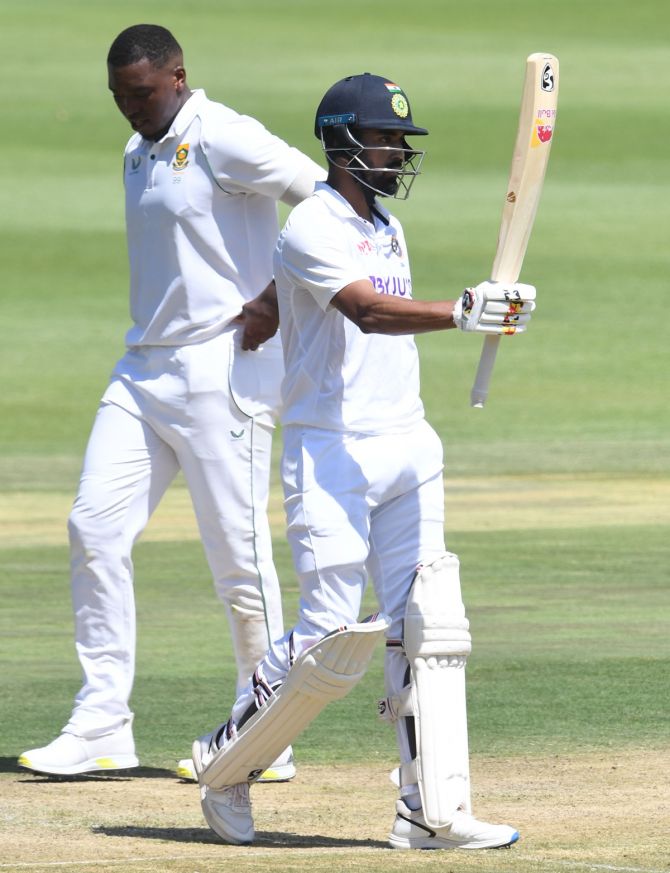 Earlier, stand-in captain Rahul was unable to convert his half-century into a big knock as another shoddy display by Pujara and Rahane left India in a troublesome 146 for 5 at tea.

With skipper Kohli ruled out of the match due to back spasm, Rahul (50 off 133 balls) was patience-personified on a bouncy and seaming Wanderers track before one pull shot ended his gritty knock in the post-lunch session.

India’s skipper for the Test hit nine boundaries and mostly played the short ball well. He kept his pull shots down the ground and drove well before Marco Jansen (2 for 18) induced from a pull shot that went into Kagiso Rabada's hands, at fine leg. 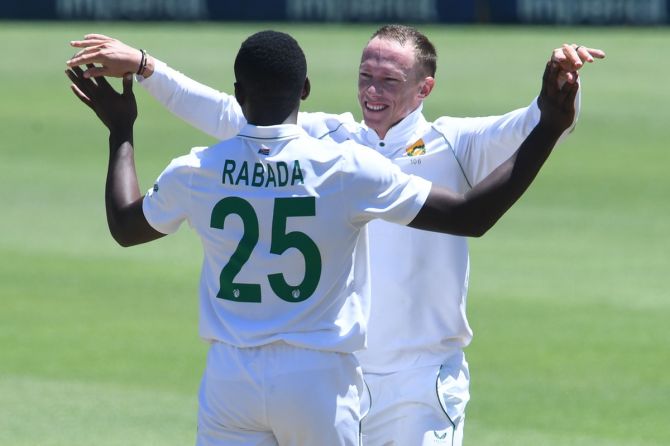 Rahul had nice little partnership of 42 runs with Hanuma Vihari (20) before an inspirational close-in catch from Rassie Van der Dussen at short leg sent the latter back.

Rishabh Pant (13) and an attacking Ravichandran Ashwin (24 batting off 21 balls) added 30 in quick time as India aimed to get at least a total between 225 to 250 in the first innings. 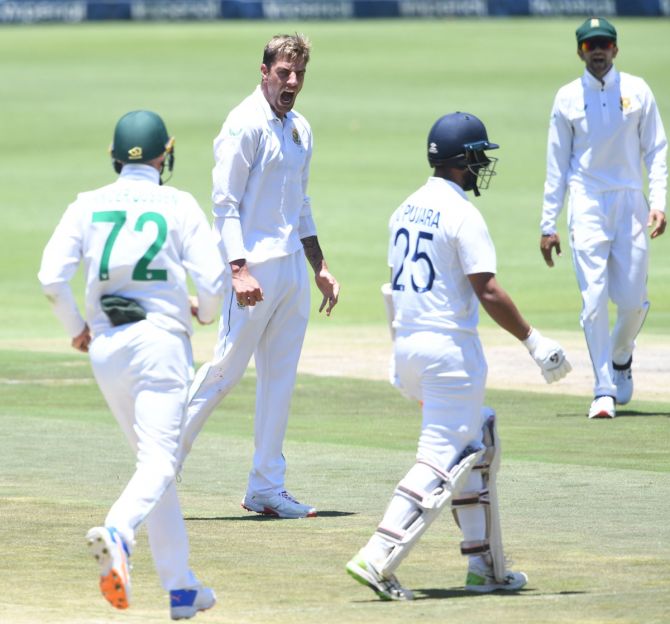 Having given up hopes of playing for England, Olivier, who played his first Test in Proteas colours after three years, removed Pujara (3 off 33 balls) with extra bounce and then with slight seam movement had Rahane (0) caught at slips.

Olivier (2 for 47) bowled multiple spells after being given the new ball alongside Kagiso Rabada. Mayank Agarwal (26) looked fluent in the first hour with five boundaries before Marco Jansen pitched one in the spot from where it wasn't on drivable length as it climbed on.

The opener went for a drive only to edge that to wicketkeeper Kyle Verreynne. Rahul, on his part, survived strong caught behind and leg before appeals, which were negated by debutant umpire Allahudien Palekar, who impressed on debut.

The start wasn't great for India as they could not have skipper Kohli in the playing eleven due to back spasms, but Rahul couldn't be blamed for electing to bat first and make best use of difficult conditions.

Till Agarwal was giving him company, the openers just like Centurion, looked good but once he was gone, Pujara once again got into a shell and was very uncomfortable against steep bounce which finally was his undoing. 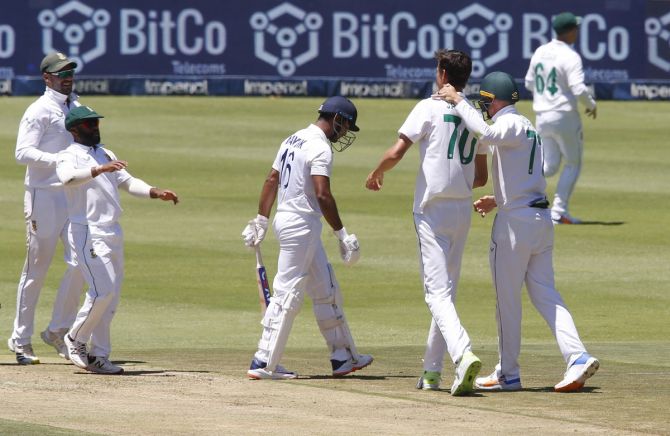 Olivier's natural back of length deliveries were a perfect recipe for disaster, as he fended one that was wide of short leg fielder but the next one lobbed up to point fielder for an easy catch.

Rahane's dismissal was that of a player whose confidence has been torn to pieces. The ball pitched on fourth stump channel with a shade cut-back that creates indecision on whether to play or not. He dangled his bat and the catch was taken in the slips.

The third Test is in Cape Town from January 11-15. 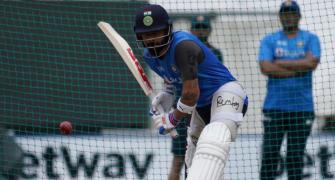 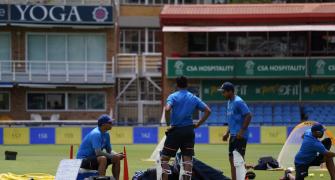 Coach Dravid on how India can better over-rate