Pakistan off-spinner Saeed Ajmal has been suspended for an illegal bowling action, the International Cricket Council (ICC) said on Tuesday, a move which the Pakistan Cricket Board intends to challenge. 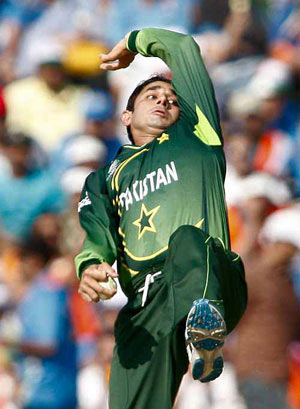 "The ban on Ajmal is a big blow to Pakistan cricket and we will appeal against the decision," PCB Chairman Shaharyar Khan said on Tuesday.

- Everything you want to know about Ajmal

"We don't know the exact details but Saeed has the option of also working on his action and taking fresh tests when he is ready," Khan said.

"What we know is that the ICC has recently changed its protocol on testing bowlers with suspect actions and other bowlers have also been reported. We could appeal in two weeks time," he noted.

Meanwhile, the bowler said that he was ready to fight his way back and represent the country in next year's ICC World Cup.

"It is disappointing to learn the result of the biomechanic test in Brisbane but I have not given up. I don't see the ban as a major problem as I know I can work out on the flaws and make a comeback," Ajmal said from Faisalabad.

"I want to play in the World Cup and see my country doing well and I will do whatever it takes to be ready for the tournament. I am a fighter and I know what I have to do to get back into international cricket before the World Cup," he added.

Earlier, on Tuesday, the ICC released a statement about Ajmal's suspension.

"An independent analysis has found the bowling action of Pakistan's off-spinner Saeed Ajmal to be illegal and, as such, the player has been suspended from bowling in international cricket with immediate effect," the ICC said in a statement.

Ajmal currently sits at the top of the ODI rankings for bowlers.

The analysis of the 36-year-old's action revealed that all his deliveries exceeded the 15 degrees level of tolerance permitted under the regulations.

"Saeed, who was reported after the first Test match against Sri Lanka in Galle last month, can apply a re-assessment after he has modified his bowling action in accordance with clause 2.4 of the Regulations for the Review of Bowlers Reported with Suspected Illegal Bowling Actions," the ICC statement read.

The analysis was performed on August 25 by the ICC's accredited team of Human Movement Specialists at the National Cricket Centre in Brisbane.

Reported to match referee Andy Pycroft by on-field umpires Ben Oxenford and Ian Gould, Ajmal played the second match only to see his team lose the game and the series.

The venue and time of the analysis was decided in consultation with the Pakistan Cricket Board (PCB).

Ajmal has played 35 Tests for Pakistan, grabbing 178 wickets. His ODI record stands at an impressive 183 wickets from 111 matches. His 63 T20 appearances have yielded 85 wickets.

He was first reported for a suspect action in 2009 -- the year he made his debut -- but was cleared after tests at the University of Western Australia in Perth. The bowler was reported for his 'doosra'.

This time, the ICC changed its protocols for testing bowling actions reported by umpires and match referees and the tests were held in Brisbane. The change was made after too many bowlers were cleared by the biomechanics in Perth. 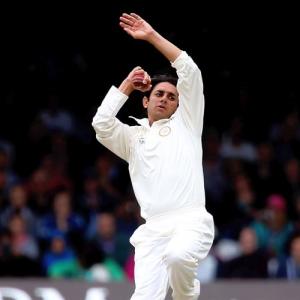