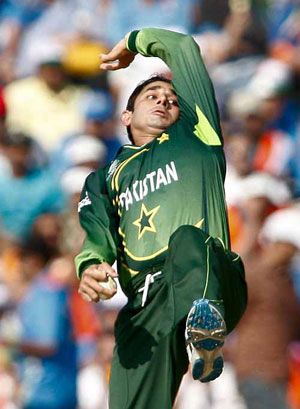 Sri Lanka won the just-concluded Asia Cup, but none of their players figure in Srinivas Bhogle and Purnendu Maji's most valuable player index. Check out why.

Although Pakistan lost the final of the Asia Cup, the three most valuable players (MVP) of the Cup were all Pakistani cricketers:  Saeed Ajmal’s outstanding bowling, Umar Akmal’s authoritative batting and Mohammad Hafeez’s all-round display earn them the top spots.

And we aren’t even talking of Shahid Afridi, who made an impact.

We have no doubt that if we had used a different index – such as Jaideep Varma’s Impact Index – Afridi would have been right on top!

Rather curiously, no Sri Lankan cricketer figures in the top five. This confirms that Sri Lanka won the Cup because of excellent team work, rather than flashy individual contributions.

For India, Ravindra Jadeja, Ravichandran Ashwin and Virat Kohli were the top contributors.

Actually India didn’t play badly; but they desperately missed that 'extra something' that Mahendra Singh Dhoni would have provided.

The table below compiles the list of the most valuable players of the Asia Cup.

The most valuable player index (MVPI) formula picks out batsmen who score a lot of runs at a high strike rate and bowlers who take a lot of wickets at a low economy rate, and expresses a player’s overall batting + bowling + fielding performance in terms of a 'run equivalent'.

Runs (scored) ' Strike rate ' W: Wickets taken ' Eco: Economy rate ' ' M: Matches played ' MVPI: Most valuable player index = sum of batting, bowling and fielding points '*Run outs are counted as 1 (wicket) for a direct hit, and 0.5 (wicket) if the fielder is an equal participant in a run out dismissal.