India scored 105 in the first innings and 107 in the second in the Pune Test. This is their lowest aggregate in a completed Test match at home. Rajneesh Gupta presents the interesting numbers from Day 3 of the first Test. 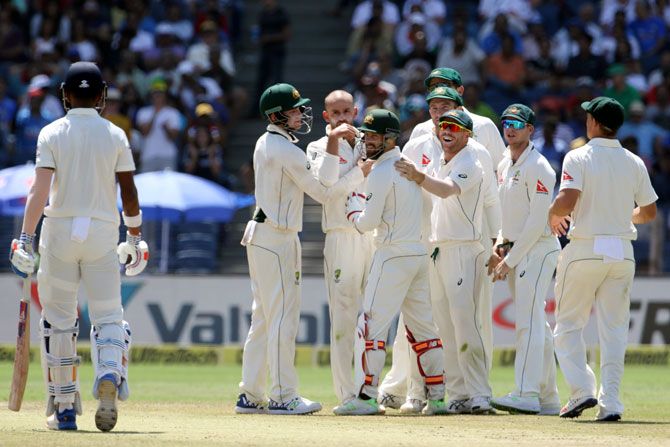 Left-arm spinner Steve O'Keefe picked up 12 wickets to guide Australia to a first win in India since 2004, the 333-run thrashing in the opening Test also bringing the home side's 19-match unbeaten streak to a juddering halt on Saturday.

The 32-year-old, who returned matching career-best figures of 6-35 in both innings for a maiden 10-wicket Test haul, shone with the ball after his skipper Steve Smith had recorded his first Test century on Indian soil to anchor Australia's batting.

Check out the interesting numbers from Day 3 of the first Test:

74 Number of overs India batted in the whole match -- 40.1 overs in the first innings and 33.5 overs in the second innings. This is the shortest India have batted in a complete match at home. The previous lowest was 109.5 at Wankhede also against Australia in 2004-05.

212 Runs scored by India in the match -- 105 in the first innings and 107 in the second. This is their lowest aggregate in a completed Test match at home. The previous lowest was 242 against England at Chennai in 1976-77. It is also India's fourth lowest match aggregate in all Tests.

10 Number of different Indian batsmen Steve O'Keefe dismissed in the Test. The only one he could not dismiss was Ishant Sharma, who remained unbeaten in the first innings and was dismissed by Nathan Lyon in the second dig. Geoff Dymock is the only Australian bowler to dismiss all 11 opposition batsmen in a Test and he did so against India -- at Kanpur in 1979-80.

2008 The last time India had lost a Test in three days at home -- against South Africa in Ahmedabad. Overall, it was the fifth such instance for India at home -- second against Australia (after Mumbai Test in 2001).

333 The margin of defeat for India -- their second biggest at home (by margin of runs). The heaviest defeat has also been inflicted by Australia. In 2004 they had beaten India by 342 runs.

12/70 Match figures for Steve O'Keefe -- the best for any spinner against India, beating fellow team-mate Nathan Lyon's 12 for 286 at Adelaide in 2014. Infact, there has been only one better performance by any bowler against India -- 13 for 106 by Ian Botham at Mumbai in 1980.

51.41 Percent runs of India's two innings combined was made by Steve Smith (109 as against 212) -- highest for an Australian batsman in a Test in India where the hosts were dismissed twice.

100s in most consecutive Tests against a particular country:

19 Number of Tests taken by Ravindra Jadeja to complete his 100 wickets in Tests in India. Only Ravichandran Ashwin has done so in fewer Tests (in 16 Tests). Harbhajan Singh also reached the mark in 19 Tests.

9 Number of consecutive defeats after which Australia won a Test in Asia. They had lost all four to India in 2013, two to Pakistan in the UAE in 2014 and all three to Sri Lanka in 2016.

0 Number of Tests Virat Kohli had lost as captain at home before this one. He had led India to 11 wins in 13 previous home Tests with two draws. 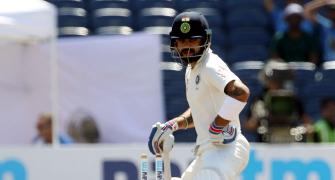 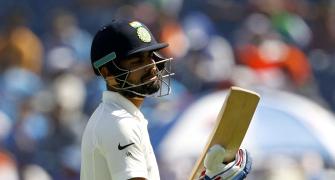