England captain Joe Root, New Zealand skipper Kane Williamson and the Pakistan duo of Shaheen Shah Afridi and Mohammad Rizwan were on Friday short-listed for the ICC Men's Cricketer of the Year Award for their stellar performances across formats.

The award will be given to the best overall performer in men's international cricket (Tests, ODIs and T20Is) during 2021. The winner, who will lift the Sir Garfield Sobers Trophy, will be announced on January 24.

Root enjoyed a year that will go down in the pages of the history books, scoring 1855 runs in 18 international matches at an average of 58.37 with six centuries. He though endured disappointment as captain with England suffering Ashes humiliation.

His year began with a marathon knock in 228 against Sri Lanka in Galle and he has only gone from strength to strength.

He would follow up his exploits against Sri Lanka with a memorable knock in Chennai, a brilliant 218 against India in the sweltering heat against a spin attack of the highest calibre.

Root continued his sublime form against India in the return leg of the Test series at home, aggregating 564 runs in four matches with three centuries to his name.

His performance also helped him reach the summit of the ICC Test Player Rankings for batting, where he would be eventually displaced by Marnus Labuschagne.

Despite failing to convert his starts into big scores, Root continued being England's best batter against Australia in the first three Ashes Tests.

As compared to Root, Williamson's 693 runs in 16 internationals at an average of 43.31 with one century was a modest total but the admirable Kiwi cannot only be judged on the basis of the runs he scored.

It was also his influential leadership that helped the Blackcaps scale unchartered heights during the year. None more so important than the ICC World Test Championship Final against India in Southampton.

Williamson played a crucial role in that game with the bat as well, scoring a vital 49 in the first innings against a quality bowling unit in conditions assisting the seamers. He followed it up with a crucial 52 not out in the run chase of 139, taking his side home before lifting the mace.

His leadership would again be vital during the T20 World Cup in UAE and Oman, with his tactical nous helping New Zealand reach the final.

Pakistan wicketkeeper-batter Rizwan had a stunning year with 1915 runs in 44 internationals at an average of 56.32 with two centuries. He also had 56 dismissals behind the wickets.

Apart from his exploits with the bat, he was as solid as ever behind the stumps, playing a key role in Pakistan's run to the semifinals during the T20 World Cup.

Rizwan also upped his game in Test cricket, scoring 455 runs in nine matches at an average of 45.50.

Swing, seam, sheer pace and sizzling yorkers -- Shaheen Afridi gave an exhibition of it all in 2021 with 78 wickets in 36 internationals at an average of 22.20. He had his best bowling figures of 6/51
The tall Pakistani fast bowler was on fire throughout 2021, knocking some of the best batters over across all three formats of the game. He especially had a year to remember in Tests and T20Is, reaching his absolute peak during the T20 World Cup in UAE where he impressed one and all with his sheer speed and skills.

He would scalp seven wickets in six matches during the tournament in Pakistan's run to the semi-final. He ruled the shortest format throughout the calendar year, scalping 23 wickets in 21 matches with his death bowling improving by leaps and bounds.

He scalped 47 wickets in nine Tests at a staggering average of 17.06. Star India batter Smriti Mandhana was on Friday nominated for the ICC Women's Cricketer of the Year award for her spectacular performances across all formats.

Mandhana was also nominated for Women's T20 Player of the Year on Thursday.

Mandhana was shortlisted for the top award along with Tammy Beaumont of England, Lizelle Lee of South Africa and Gaby Lewis of Ireland. The award is given to the best overall performer in women's international cricket (Tests, ODIs and T20Is) during 2021. The winner will be announced on January 23.

The 25-year-old right-handed opening batter scored 855 runs in 22 international matches across formats during the year at an average of 38.86 with one century and five half-centuries.

In the limited-overs series against South Africa where India won just two of the eight matches at home, Mandhana played a major role in both of the wins. She scored 80 not out as India chased down 158 in the second ODI that helped them level the series and scored 48 not out in the final T20I win.

Mandhana played a sublime innings of 78 in the first innings of the one-off Test against England that ended in a draw.

She played an important knock of 49 in India's only win in the ODI series. Her 15-ball 29 and fifty in the T20I series went in vain, though, as India fell short in both the matches and lost the series 1-2.

Mandhana was in good touch in the series against Australia, starting with the ODI series where she scored 86 in the second ODI.

She scored a brilliant century in the only Test, the first of her career, and was awarded the Player of the Match. She scored her second T20I fifty of the year in the final match, though India fell short and lost the series 2-0.

She made India's first-ever pink-ball Test even more memorable by smashing her maiden century (127) in the longest format of the game. The match ended in a draw and Mandhana was declared the Player of the Match.

With 872 runs in 21 internationals at an average of 48.44 with one century and eight half-centuries, England's Beaumont finished as the highest run-getter in the calendar year.

In the multi-format series against India, she started with two consecutive half-centuries, the first one coming in the only Test and the second in a Player of the Match-winning effort of 87 not out in the first ODI. She scored her third half-century of the tour in the second T20I, though it came in a losing effort.

She bagged yet another Player of the Match award in the T20I series opener against New Zealand at home, missing out on a century by just three runs. She capped the limited-overs tour with a ton that helped England clinch the ODI series 4-1.

South African Lee scored 864 runs in 19 internationals at an average of 57.6 with one century and seven half-centuries.

She was in sensational white-ball form throughout the year, particularly in the ODIs where she finished as the highest run-getter in 2021 with 632 runs in 11 matches as well as the top-ranked Women's ODI batter in the ICC Rankings.

Lee was in great form in the ODI leg of the Indian tour, where she scored two fifties and a hundred in four matches. South Africa won the series 4-1 and Lee was awarded the Player of the Series for her 288 runs. She then scored another fantastic fifty in the second T20I against India, helping her team wrap up the series with a game in hand.

Ireland's Lewis Lewis scored 624 runs in 15 internationals at an average of 52 with one century and four half-centuries.

She made history at ICC Women's T20 World Cup Europe Qualifier in August when she became the first Irish woman to score a T20I century. The knock of 105 not out came in just 60 balls against Germany. 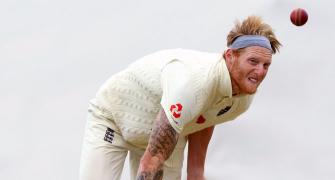 India are U19 Asia Cup champions