IMAGE: In his soon to be published book titled On Fire, Ben Stokes analysed each of England's games in the World Cup. Photograph: Michael Steele/Getty Images

England allrounder Ben Stokes denied the claims suggesting that he has hinted that India lost deliberately to England at the World Cup last year in his latest book.

In his new book On Fire, being published by Headline Books and distributed by Hachette India, the cricketer analysed all of England’s games in the tournament, but his analysis of the match against India has garnered much attention on social media.

While addressing the encounter against India, Stokes wrote that 'there was little or no intent from Dhoni' in the match, and described the partnership between Rohit Sharma and Virat Kohli as 'mystifying',

Former Pakistan bowler Sikander Bakht, on Twitter, claimed that Stokes has written in his book that India lost intentionally to England to remove Pakistan from the World Cup. The left-handed batsman has denied the claims on social media and called the suggestions as 'click bait'.

In response to Bakht’s tweet, a Twitter used asked where has Stokes made such comments. In response to the user’s question, Stokes replied: “You won’t find it cause I have never said it... it’s called 'twisting of words' or 'click bait'.”

Stokes in his soon-to-be-published book revealed that the England dressing room felt that Dhoni tried to take it deep so that the run-rate remained intact. Dhoni remained unbeaten on 42 off 31 balls but most of the runs came in the last over when the match as a contest was over.

“There is a theory in our camp that Dhoni’s way of playing has always been the same. Even if India can’t win the game, he takes it right to the end to try to make sure that India’s run rate stays relatively healthy,” Stokes wrote.

“His big thing has always been to give himself a chance of winning by being at the crease for the final over, but he generally likes to stick around to get as close to a target as possible even in a losing cause.” 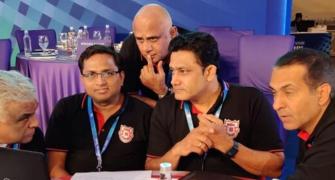