IMAGE: Deepak Chahar's heroics (four wickets in an over) went in vain as Rajasthan went down by 1 run. Photograph: BCCI

Medium-pacer Deepak Chahar followed up his hat-trick in the final India-Bangladesh T20 international with almost a repeat, taking three wickets in the space of four balls for Rajasthan against Vidarbha in a Group 'B' match of the Syed Mushtaq Ali Trophy T20 tournament in Thiruvananthapuram on Tuesday.

However, his heroics (four wickets in an over) went in vain as Rajasthan went down by 1 run (via the VJD method) finishing with 105 for 8 in a game to reduced to 13 overs due to rain.

The fast-improving Deepak Chahar, who on Sunday last became the first India player to take a T20 international hat-trick and also the best ever bowling figures (6 for 7), picked up the wickets of Darshan Nalkande, Shrikant Wagh and Akshay Wadkar off the fourth, fifth and sixth balls of the final over of Vidarbha's innings, but missed the three-peat as he bowled a wide in between.

His performanced helped Rajasthan restrict the opponent to 99 for 9 in 13 overs.

After scalping the wicket of Rupesh Rajkumar of the first ball of the over, he dismissed Nalkande off the fourth.

However, he delivered a wide the next ball and then dismissed Wagh and Wadkar off the next two to finish with figures of 4 for 18 in 3 overs.

Chahar began the over by picking up the wicket of Rupesh Rajkumar Rathod to finish with superb figures of 4 for 18 in 3 overs.

Earlier, Vidarbha chose to bat after winning the toss and had a quick start thanks to skipper Faiz Fazal (17) and Akshay Kolhar (19).

After some middling performances by the batsmen, the Vidarbha innings imploded and Deepak Chahar triggered the collapse.

His first victim was Rathod, who was caught by his cousin Rahul Chahar.

He then had Nalkande caught by Rajnesh Bishnoi, before having Wagh caught by Chandrapal Singh Chundawat.

He then bowled Wadkar to complete a hat-trick.

Chasing 106 for victory, Rajasthan faltered after a bright start provided by Manender Singh, who smashed 6 sixes in 17 balls before falling for 44.

Vidarbha tops the points table with 16 points from 4 matches in an all-win record.

In another match, Kerala posted a 75-run win over Manipur thanks to Sachin Baby's knock of 48 and S Midhun's haul of 4 for 5 in 4 overs of leg-spin.

Mumbai registered its fourth win in the league stage of the Syed Mushtaq Ali trophy in Mumbai after beating Pondicherry by 27 runs.

The title favourites have beaten Mizoram, Haryana and Madhya Pradesh in their first three games.

Asked to bat, Mumbai rode on a blazing half century by skipper Suryakumar Yadav (57 off 37 balls) to post a descent 171/6 on the board.

Tare too fell in quick succession as the hosts were reeling at 52-2.

But then Surya, who is scoring runs in every game, took the responsibility and steadied the ship in company of Shreyas Iyer (19) as the duo stitched a 49-run stand for the third wicket.

Playing his natural aggressive game, Surya tore apart the Pondicherry attack, striking six fours and two sixes. After Shreyas departed, Surya got an able partner in Siddhesh Lad, who took made a quick fire 39 off 22 balls, with four boundaries and two other hits over the fence.

Their respective knocks ensured that Mumbai crossed the 170-run mark.

Chasing 172, Pondicherry had a pathetic start and were reeling at 29-2. But then Parag Dogra (45 off 35 balls) and opener Arun Karthik (27 balls) tried to resurrect the innings with 28-run stand, before Karthik was dimissed by Shivam Dube.

Anand Subramanian (39 off 31 balls) and Dogra gave a scare to Mumbai, but their bowlers held their nerves to eke out a win.

Pacer Tushar Deshpande (2-29) and Shams Mulani (2-25) shared the spoils. There are no matches on Wednesday and the action resumes on Thursday.

In the first game at the Wankhede Stadium, Meghalaya stunned Assam by four wickets.

Chasing a modest 109, Meghalaya rode on a blazing 42 off 23 balls by wicket-keeper Punit Bisht, who smashed six fours and a lone six. The Meghalaya middle-order capitalized on the 62-run opening stand between Bisht and Raj Biswa (25) and chased the target with seven balls to spare.

In the first match of the BKC, Madhya Pradesh defeated Mizoram by 86 runs.

Opener Taruwar Kohli's gritty half century went in vain as Mizoram crawled to 127/2 in pursuit of 214-run target.

In the second game at BKC, Haryana defeated Bengal by five wickets as they chased the 123-run target with 17 balls to spare. India spinner Yuzvendra Chahal, who came back to the Haryana team after national duty, returned with figures of 1-21.

Uttarakhand left-arm spinner Mayank Mishra claimed a hat-trick to trigger Goa's batting collapse in his side's eight-wicket win in a Group A match of the Syed Mushtaq Ali Trophy T20 tournament in Visakhapatnam.

Mishra took the new ball after his side opted to bowl and took out Aditya Kaushik (4), Amit Verma (0) and Suyash Prabhudessai (0) in his second over, leaving Goa reeling at 7 for 4.

Goa eventually could muster only 119 for 9 in their allotted 20 overs, built around one-down Snehal Kauthankar's 57 off 46 balls.

Uttarakhand overhauled the target with 3.2 overs spare, reaching 120 for 2 in 16.4 overs with captain Tanmay Srivastava top-scoring with 49 not out from 39 deliveries with the help of six fours and a six.
Wicketkeeper Saurabh Rawat (31 not out) was the other unbeaten batsman of Uttarakhand. 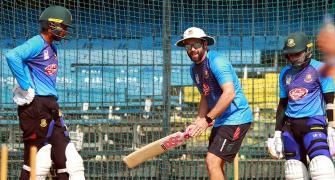 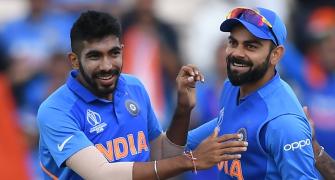 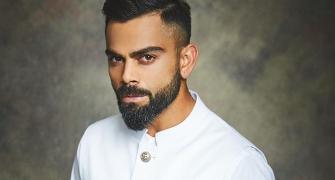 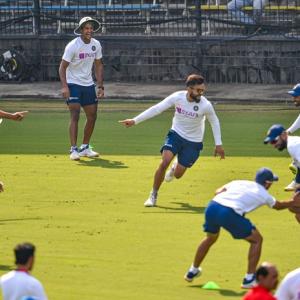