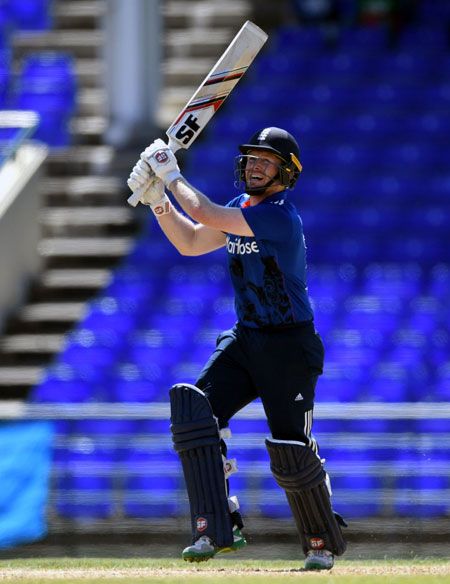 England captain Eoin Morgan blazed a fluent 107 to help secure a 45-run victory over West Indies in the first one-day international at a windy Sir Vivian Richards Stadium in Antigua on Friday.

Having been sent in to bat, England posted 296 for six in their 50 overs before the hosts were bowled out for 251 in 47.2 after never quite managing to stay up with the required run-rate.

England found themselves in early difficulty at 29 for two after Jason Roy (13) and Joe Root (four) fell in quick succession, but Morgan and Sam Billings (52 from 56 balls) steadied the innings.

Ben Stokes (55 from 61 balls) blasted three sixes as he added 110 with Morgan for the fifth wicket, before the latter was run out with three balls remaining in the innings.

Morgan brought up his second century in three innings, and 10th in ODIs, off 108 balls having stroked 11 fours and two sixes. He now has the most tons by an England captain in the 50-over format with five, surpassing Andrew Strauss and Alastair Cook.

Jason Mohammed compiled 72 from 91 balls as the anchor of the West Indies reply, his career-best score in just his third game, while Jonathan Carter bludgeoned 52 from 47 deliveries.

When the pair added 82 for the fifth wicket the home side were in the game but Roy held on to a fine catch off the bowling of Liam Plunkett (4-40) to dismiss Carter and Steve Finn (0-49) used his big boot to run out Mohammed on his follow-through.

Chris Woakes (4-47) did the damage at the top of the order by removing both openers, with all-rounder Stokes not asked to bowl in the innings by Morgan.

The second ODI will be played at the same venue on Monday, before the series finale in Barbados on Thursday.

© Copyright 2021 Reuters Limited. All rights reserved. Republication or redistribution of Reuters content, including by framing or similar means, is expressly prohibited without the prior written consent of Reuters. Reuters shall not be liable for any errors or delays in the content, or for any actions taken in reliance thereon.
Related News: Eoin Morgan, England, Jason Mohammed, Jonathan Carter, Ben Stokes
COMMENT
Print this article