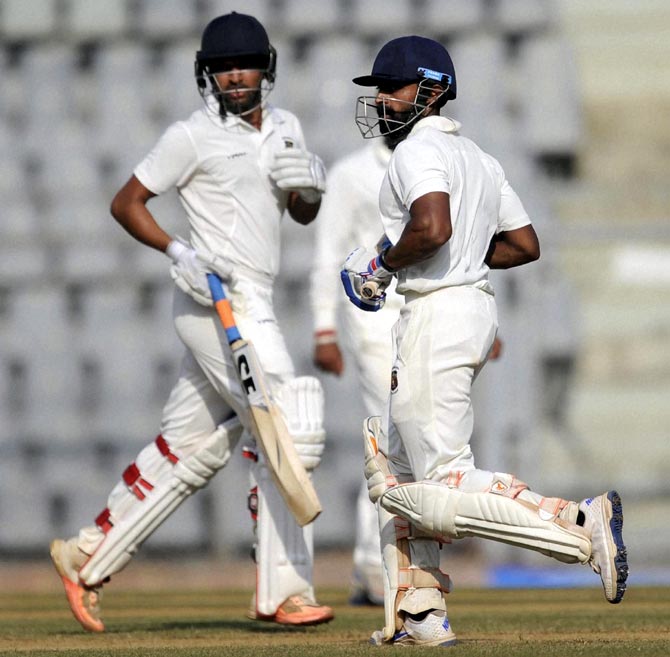 Swapnil Gugale and Ankit Bawane on Friday broke a 70-year-old partnership record for all wickets in the Ranji Trophy when they stitched a massive, unfinished stand of 594 for Maharashtra against Delhi in a Group B match at the Wankhede Stadium in Mumbai.

When Maharashtra declared their first innings, Gugale was unbeaten on a career-best 351, that contained five sixes and 37 fours off 521 balls, while his third wicket partner Bawane remained unconquered, also on a career-best 258 laced with 2 sixes and 18 fours.

The duo, who had come together within 45 minutes of play starting on the first day on Thursday, were unseparated after breaking the previous all-time best fourth wicket partnership record of 577 set by Vijay Hazare and Gul Mohammed for Baroda against Holkar way back in 1946-47 in Baroda.

Maharashtra declared their first innings closed at 635 for two after which Delhi replied with 21 without loss in five overs before stumps with openers Unmukht Chand (4) and Mohit Sharma (14) at the crease.

Delhi, at close, were 614 runs adrift of the huge total put up by Maharashtra.

Delhi used as many as nine bowlers to break the stand between the 25-year-old Pune-born Gugale and 23-year-old Aurangabad-born Bawane and all came to nought.

Gugale, dropped on 38 and 105 on Day 1, had another slice of luck when on 262 as he was let off by Parwinder Awana off left arm spinner Varun Sood.

Sood and Manan Sharma were the most expensive Delhi bowlers, giving away 107 and 148 runs without taking a wicket.

Delhi were also without the services of their lone wicket taker Navdeep Saini who left the field early in the morning after pulling a stomach muscle and did not bowl again.

Punjab suffered a batting collapse but still enjoyed an upper hand courtesy impressive knocks from captain Yuvraj Singh and Gurkeerat Singh and superb bowling from pacer Manpreet Gony on the second day of their Ranji Trophy match against Madhya Pradesh, in Lahli.

Punjab resumed the day at 347 for 3 but could add just 31 runs from 19.2 overs at the expense of seven wickets to be all out at 378 in the morning session. They are still in a strong position after restricting MP to 182 for 5 at stumps.

Yuvraj, who is out of favour as far as national team is concerned, could add just 13 runs to his overnight 164 while another centurion Gurkeerat, who resumed the day at 101, scored just two runs more before being the first man out at the Bansi Lal Cricket Stadium.

Pacer Ishwar Pandey (8/102) rocked the Punjab innings with six more wickets in addition to the two he already had yesterday. He scalped the six of the last seven Punjab wickets, including that of Yuvraj who was the eighth batsmen out. Five Punjab batsmen were out in single digit scores on Friday.

Yuvraj ended his innings of 177 after facing 295 balls from which he hit 14 boundaries.

In reply, MP were 182 for five in 62 overs with Punjab pacer Manpreet Gony grabbing four wickets for 25 runs. None of the MP batsmen could score substantial runs.

Shubham Sharma was batting on 48 and he was being given company by Ankit Dane (14 batting) at stumps.

Saurashtra conceded the first innings lead after their batsmen failed to come good against Odisha and were dismissed for 186 on the second day of the Group B Ranji Trophy match in Hyderabad.

In reply, Odisha were 62/2 after their first innings effort of 228. At stumps, Govinda Poddar (13) and Anurag Sarangi (13) were holding fort for Odisha.

It was a poor batting effort by Saurashtra, whose bowlers had done well to dismiss Odisha on the first day itself.

Skipper Jaydev Shah produced the Saurashtra's best batting effort with a 64-run that was laced with eight hits to the fence. Chirag Jani was the other notable contributor with a 45-run knock, which had four fours.

Basant Mohanty was the top wicket-taker for Odisha with figures of 4/58 in 20 overs. Suryakant Pradhan and Dhiraj Singh scalped three wickets apiece.

Nitin Saini (61) and Shubham Rohilla (60) blasted twin half centuries to power Haryana to 236 for 4 against Hyderabad on the second day of their Ranji Trophy Group C match at Keenan Stadium in Jamshedpur.

Riding on a superlative batting display by its top-order, Haryana grabbed a lead of 45 runs with six wickets still remaining in their first innings.

At the draw of stumps, Chaitanya Bishnoi (47) and Rohit Sharma (7) were at the crease.

In reply to Hyderabad's first innings total of 191, Haryana produced a superb 126-run opening partnership to lay the foundation for a big score.

Saini hit six boundaries in his 158-ball innings, while Rohilla blasted 10 fours in his 130-ball stay.

Mohammed Siraj broke the partnership in the 44th over when he trapped Rohilla for an LBW and then in the 55th over Hassan had cleaned up Saini as Haryana were reduced to 138-2.

Rajasthan produced a solid batting performance to be 208/3 in their first innings on the second day of their Ranji Trophy Group B clash against Assam in Visakhapatnam.

After dismissing Assam for 195 yesterday, Rajasthan rode on a fine middle order batting effort to grab the first innings lead.

Mahipal Lomror was the star of the show for Rajasthan, unbeaten at 84 along with Rajat Bhatia (28) when stumps were drawn for the day.

Lomror's 239-ball knock was studded with 10 hits to the fence and his partnerships with Vineet Saxena (30) and Ashok Menaria (44) proved crucial in Rajasthan's steady batting performance.

With Saxena, he combined to add 76 runs for the second wicket before forging a 75-run stand with Menaria for the fourth wicket.

For Assam, Arup Das and Pallavkumar Das picked up a wicket each.

Ton-up Tiwary takes Bengal to 466 against UP

Manish Tiwary cracked a superb century as Bengal posted 466 in their first innings and then reduced Uttar Pradesh to 126-3 on day two of their Ranji Trophy Group A match in Jaipur.

Starting at an individual overnight score of 1, Tiwary produced 15 boundaries in his 150-ball innings and was the last man to be dismissed as he batted with the lower-order batsmen to take Bengal across the 450-mark.

Abhimanyu Easwaran and Tiwary started the proceedings at Bengal's overnight first innings score of 288 for 3 and added another 50 runs before the opener was dismissed by Imtiaz Ahmed at the Sawai Mansingh Stadium.

Tiwary then took the onus on himself and kept the scoreboard ticking even as wickets kept tumbling at the other end with Pankaj Shaw (20) and Aamir Gani (12) being the only batsmen to reach double scores.

In reply, Uttar Pradesh found themselves tottering at 49-3 with Ashok Dinda removing Tanmay Srivastava (2) and Samarth Singh (13) cheaply after Sayan Ghosh drew the first blood dismissing Almas Shaukat (1).
However, Umang Sharma (57) and Sarfaraz Khan (43) arrested the slide with a 77-run unbeaten partnership and remained at the crease when the stumps were drawn.

Akhil Herwadkar struck a solid hundred to help Mumbai take the first innings lead against Baroda on day two of the Ranji Trophy Group A match in New Delhi.

Baroda were all out for 305 after resuming their first innings at 286 for nine.

The other contributions came from Suryakumar Yadav (54) and Balwinder Sandhu, who remained unbeaten on 56.

Sagar Mangalorkar was the stand out bowler for Baroda, taking three wickets for 74 runs.

Captain Irfan Pathan, who made 19 with the bat on Thursday, was economical in his 13 overs giving away only 21 runs and took the wicket of talented rookie Armaan Jaffer.

Mumbai made a nervy start, losing Shreyas Iyer and Jai Bista cheaply to be 18 for two. Herwadkar held his end and struck an 81-run stand with Yadav, who 10 fours in his attacking knock.

Herwadkar himself hit 14 fours in his 216 ball effort.

Yadav's run out resulted in loss of three quick wickets for Mumbai before Sandhu and Abhishek Nayar (38) came to their team's rescue.

Samarth, who resumed the day at 118, led the batting charge with a 462-ball 235 as Karnataka scored runs at a brisk pace against a listless Jharkhand bowling attack to declare their innings at a mammoth 577 for 6 at Greater Noida Sports Complex Ground.

Samarth hit 24 boundaries and two sixes in his marathon innings which lasted more than 11 hours.

All-rounder Stuart Binny (97) missed out on a century by three runs while Kaunain Abbas hit 55.

The highlight of the Karnataka innings was the 185-run stand between Samarth and Binny for the fifth wicket.

In reply, Jharkhand were nine for no loss from five overs. They trail by 568 runs with all the first innings wickets in hand.

Jharkhand now face a herculean task of saving the match and their chance of winning it is virtually over. They can hope for a draw and wriggle out of the match with one point by batting sensibly in the remaining two matches. 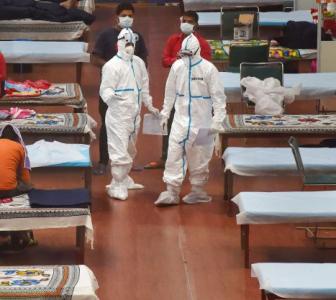 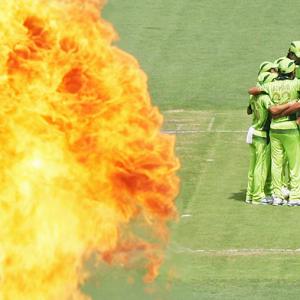