Shaken by the match-fixing scandal, Indian cricket was going through a turbulent time at the start of the 21st century when Sourav Ganguly took charge of the team.

Trailing 0-1 after their loss in Mumbai, India were looking down the barrel and were asked to follow-on in the Kolkata Test but Laxman's 281 and Rahul Dravid's 180 in a 376-run fifth wicket partnership set the tone for an epic 171-run win.

So when the Hyderabadi batsman chose to write his autobiography, '281 and Beyond', the title of the book was a no-brainer.

But Ganguly was a tad disappointed with the title, he said in a lighter vein.

"I also texted him a month back but he didn't reply," Ganguly said at the Kolkata leg of the book launch.

"I told him it was not the apt title... It should have been '281 and beyond and that saved Sourav Ganguly's career'," the former India captain said.

"I strongly opposed the title because if he had not scored 281, we would have lost the Test and I would not have been captain again," a modest Ganguly said.

Despite having a successful career in Tests, Laxman's limited overs career failed to take off as he played only 86 ODIs, and was dropped from the South-Africa-bound India's 2003 World Cup.

Reflecting on the omission, Ganguly said "maybe it was a mistake".

"Laxman was a player who could have done well in all formats. In hindsight, maybe it was a mistake. As a captain, you take decisions and things happen which may not be right or wrong," Ganguly said.

Describing this as the darkest phase of his career, Laxman said he had actually contemplated quitting when he went for a vacation with his friends in the USA.

"But then I realised, that I did not become a cricketer to play the World Cup but it was for the sport. I was being childish.

"I told myself 'I was among the lucky few who got this opportunity and I should not let it go'," Laxman recalled.

He scored a superb 102 against Australia in Gwalior and followed it up with three more centuries in the triangular series, involving Australia and Zimbabwe.

"Everyone contributed in the Test. Even substitute Hemang Badani took a blinder fielding at forward short leg," Laxman said.

"That aggression in the team was infectious. We felt for each other in the team."

The programme was also attended by his former India pace spearhead Zaheer Khan. 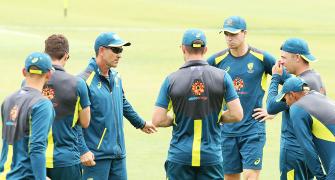 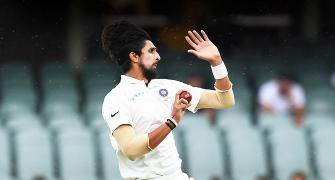