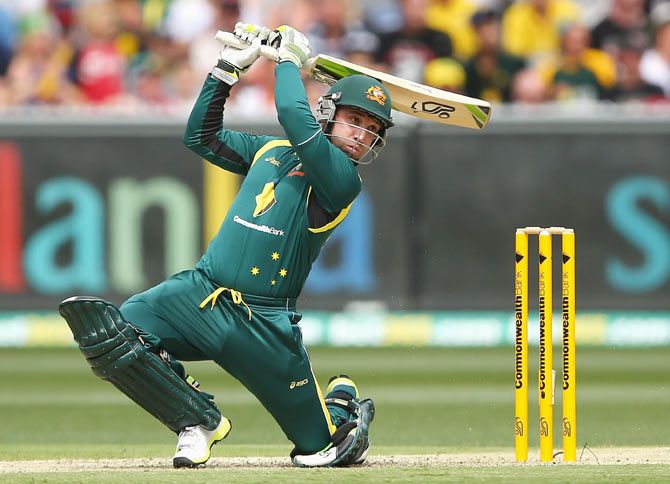 Chhurim Sherpa began her journey for a third ascent to Mount Everest on Sunday but this time some odd items were also part of her climbing gear.

Chhurim, who is the first woman to climb the 8,850 metre (29,035 feet) Everest summit twice in a week, will take a cricket bat and two jerseys belonging to deceased Australian cricketer Phil Hughes to the summit as a mark of tribute to the player.

Hughes died in November after he was hit on the back of his head by a ball while batting during a domestic match in Sydney, sparking a massive outpouring of grief.

Chhurim, who like many sherpas in Nepal is called by her first name, is expected to carry the items to the top and back to Kathmandu, where they will be kept at the Australian embassy.

Chhurim's Everest ascents on May 12 and 19 in 2011 were recognised by the Guinness World Records as a first. She will be among 350 climbers who have returned to the world's highest mountain a year after it was hit by a worst-ever disaster.

Sixteen guides, who were trying to fix ropes and crack snow and ice to carve out a route for foreign climbers, were crushed to death by an avalanche in the treacherous Khumbu Icefall, one of the most dangerous parts of the climb to Everest.

That incident forced 326 foreign climbers to abandon their pursuits as many guides refused to climb demanding better wages, insurance covers and benefits.

"Climbing Sagarmatha is a big challenge and risky in itself," the 31-year-old Chhurim said, referring to the Nepali name of the mountain.

"I will try hard to reach the bat and jerseys to the top."

More than 4,000 people have climbed Mount Everest since it was first scaled by New Zealander Edmund Hillary and his mate Sherpa Tenzing Norgay in 1953.

On Saturday, the government said it would set aside part of special fees collected from tens of thousands of trekkers and mountain climbers every year to support the families of guides and porters killed or for treatment of those who are injured.

© Copyright 2021 Reuters Limited. All rights reserved. Republication or redistribution of Reuters content, including by framing or similar means, is expressly prohibited without the prior written consent of Reuters. Reuters shall not be liable for any errors or delays in the content, or for any actions taken in reliance thereon.
Related News: Chhurim Sherpa, Mount Everest, Phillip Hughes, Sherpa Tenzing Norgay, Guinness World Records
SHARE THIS STORYCOMMENT
Print this article