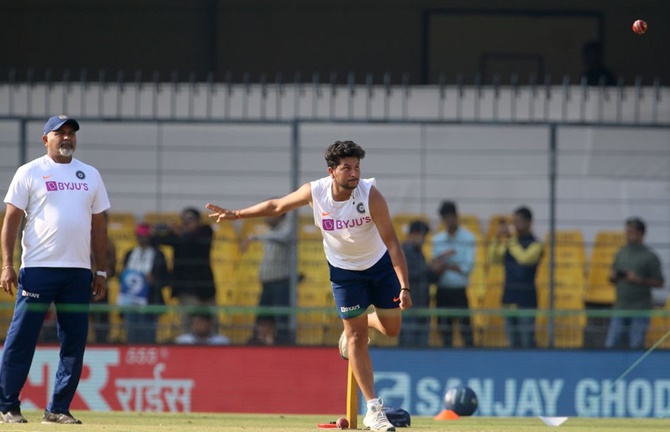 IMAGE: The Pink Ball Test is slated to be held from November 22 to 26 at the iconic Eden Gardens in Kolkata. Photograph: BCCI

Skipper Virat Kohli, Rohit Sharma and the much-vaunted pace trio skipped training while some of the remaining team members practised under lights on the centre wicket of Holkar Stadium, in Indore, on Sunday, gearing up for India's first Day/Night Test.

Besides Kohli and Rohit, the trio of Mohammed Shami, Ishant Sharma and Umesh Yadav were also given a break after accounting for 14 of the 19 Bangladesh wickets in the opening Test here, which India won by an innings and 130 runs.

The Pink Ball Test is slated to be held from November 22 to 26 at the iconic Eden Gardens in Kolkata.

Cheteshwar Pujara, Ravichandran Ashwin and Ravindra Jadeja were the prominent figures to have trained from the main team. So were Rishabh Pant, Hanuma Vihari, Shubman Gill and Kuldeep Yadav.

The support staff, comprising head coach Ravi Shastri, batting coach Vikram Rathour and fielding coach R Sridhar, were present at the stadium as the seven players went about their paces.

Having won the first Test with plenty of time to spare, India extended their stay in Indore by two days for training under lights and get used to the 'twilight' ahead of the pink-ball challenge.

The Bangladesh team had also stayed back and utilise the time, which they have got because of an early finish to the opening match, training under lights.

The teams will leave for Kolkata on November 19 and train at the Eden Gardens for two days.