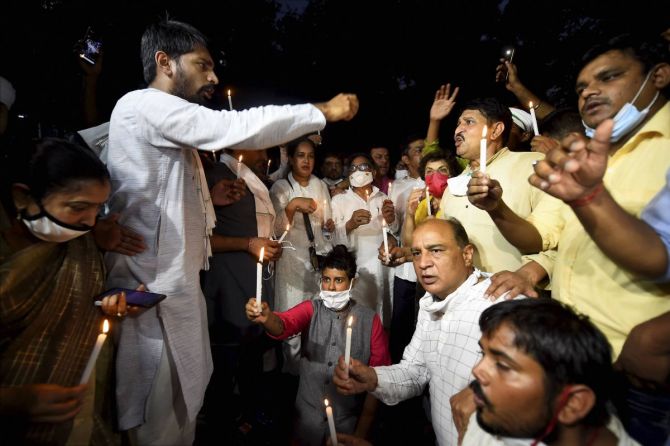 IMAGE: Congress activists participate in a candlelight protest over the death of the Hathras gang-rape victim at Safdarjung hospital in New Delhi. Photograph: Kamal Singh/PTI Photo

Cricketers Virat Kohli, Ajinkya Rahane and Yuvraj Singh spoke up in favour of bringing justice for the 19-year-old woman brutally gang-raped in a village in Hathras on September 14.

After her condition deteriorated, she was taken to New Delhi's Safdarjung hospital where she died on Tuesday.

Taking to Twitter, Kohli, India's cricket captain, wrote: 'What happened in #Hathras is inhumane and goes beyond cruelty. Hope the culprits of this heinous crime will be brought to justice. #JusticeForManishaValmiki.'

'It is heart-wrenching to see what has happened in Hathras .The perpetrators of such a heinous crime must be severely punished. Justice for Manisha Valmiki,' India's Test vice-captain Rahane, himself the father of a daughter, tweeted.

'Once again India's daughter suffers terribly. At a loss of words to express my anger & sorrow about the #Hathras incident. I stand with the family who lost their loved one to this heinous crime. Strict action must be taken against this inhuman behaviour #JusticeForManishaValmiki,' Yuvraj tweeted.