Joe Root is thriving under new England captain Ben Stokes' aggressive approach to the game but while he is happy to rack up the runs and play like a "rock star", he says there are times when his inner voice is urging a bit more caution.

Former skipper Root and Jonny Bairstow smashed unbeaten centuries against India to chase down 378 and win the fifth test by seven wickets on Tuesday.

That series-levelling victory was England's highest successful run-chase and another example of the swashbuckling style of play that has become the hallmark of England's new era under Stokes and coach Brendon McCullum.

"Ben has wanted us to be entertainers. He mentioned trying to be rock stars on the field," Root said. "It's about trying to have fun and relish every opportunity you get to showcase what you're about and put on a show for everyone.

"I don't think I'll ever be able to feel or look like a rock star, but for 10 seconds I might have done today."

After finishing on an unbeaten 142, Root raised his hand and wiggled his little finger in a reference to a scene from the recent Elvis Presley biopic.

"Ben watched the Elvis film the other day and he's been doing that all week. It was a little tribute to him," Root added.

England have hit all the right notes since the appointment of Stokes and McCullum, clinching their fourth win from four matches following the 3-0 whitewash of world test champions New Zealand.

That followed a run of just one win in 17 tests with Root at the helm.

Root, who played a reverse-scoop for six off India's Shardul Thakur, said he was still trying to strike a balance between his orthodox style and the new attacking approach.

"The Yorkshireman inside me is still saying, 'Dig in, play straight and get behind it,'" Root said. "Then there's the captain on my shoulder saying, 'Be a rock star'.

"So you're fighting between the two of them, sometimes." 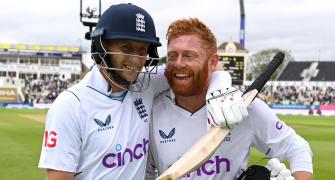 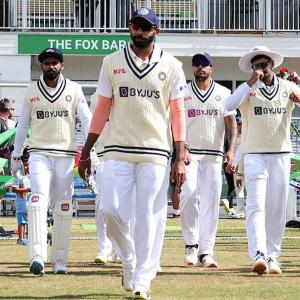