News
Business
Movies
Sports
Cricket
Get Ahead
Money Tips
Shopping
Sign in  |  Create a Rediffmail account
Rediff.com  » Cricket » Is it the beginning of something good?

Is it the beginning of something good? 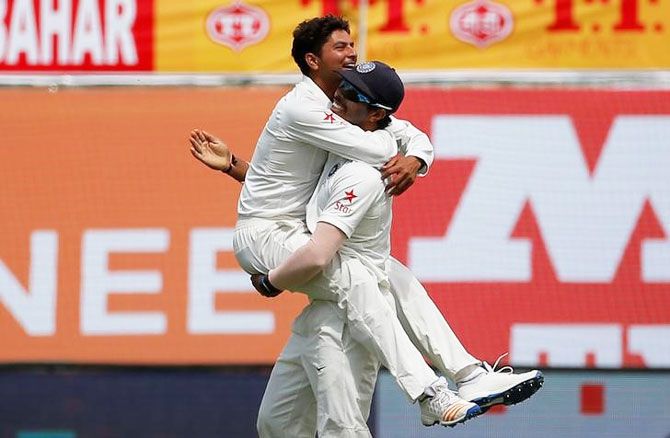 Former India captain Sourav Ganguly is impressed with the form exhibited by pacer Umesh Yadav in the ongoing Test series against Australia.

The pacer from Vidharbha has picked 17 wickets from four Tests, including the three he took in the final match in Dharamsala on Monday.

Commenting about the performance of Umesh in the series, Ganguly said, "To see an Australia team on the back foot against fast bowling is a great sign. Umesh, to me, is the find of the season. Hope he carries on the good form with the ball."

The Cricket Association of Bengal, where Ganguly is the president, also praised spinner Kuldeep Yadav on his impressive debut.

"Hopefully it's the beginning of something very good," said Ganguly to the reporters at the Eden Gardens.

According to Ganguly, "He is young. He will learn. Credit should go to (coach Anil) Kumble for giving him an opportunity. End of the day it's the bowlers who will pick 20 wickets for you to win Test matches."