Dhoni's diverse talents make him an invaluable asset to the Indian side.
But it will be his batting that keeps him afloat, says Dhruv Munjal. Writing anything that is even remotely defeatist about Mahendra Singh Dhoni comes with its share of perils.

For one, the man likes fighting back, in the alluringly timeless manner only he can -- sometimes through force, other times through reinvention.

And the fans lionise him like some imperishable demigod.

Fans chant his name like never before, and his popularity -- dare I say -- eclipses Virat Kohli's.

Outside stadiums before games, numbers 7 and 18 jostle for space on the backs of blue jerseys. The contest is mostly close, but if someone were fanatical enough to actually count, 7 would outnumber 18 more often than not.

Kohli may be the enticing entrée, but Dhoni remains the delectable hors d'oeuvre without which the meal never seems complete.

Just that now we don't know how long we can feast on his genius for. 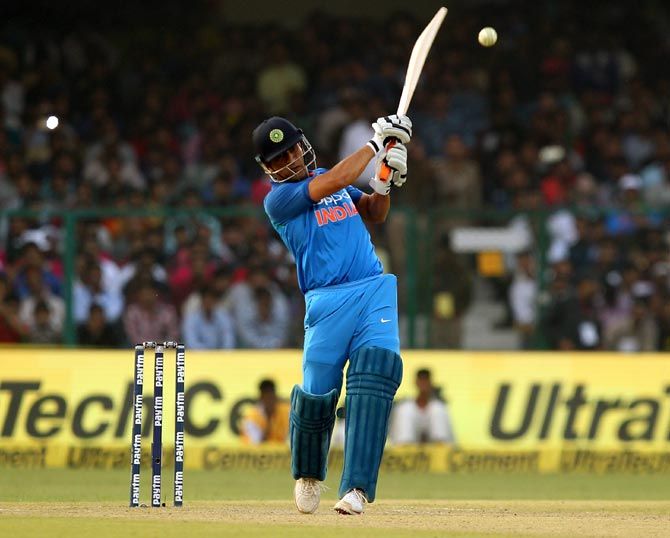 You don't have to be an outstanding cricket pundit to figure out the problems in Dhoni's batting.

He struggles to turn over the strike -- something he has admitted to himself -- and fails to call on his six-hitting capability with the eye-popping regularity that he once did.

Combine the two and you get something as diabolical as the Rajkot T20 against New Zealand. Dhoni may have finished with a respectable 44 ball 49 and perhaps even mildly impressed Simone Biles with an age-defying split.

But this game craved the Dhoni of old -- the explosive entertainer, not the scrappy blocker.

Watching him bat with Kohli in Rajkot was almost like seeing two men battling the opposition with weapons from two differing eras.

Kohli, the poster boy of the automatic gun generation, fired sixes on demand.

Dhoni, the old-school sword master, tried to slay, but repeatedly erred. Despite the swinging and missing, he looked his stolid self.

But beneath the unruffled exterior, there is little doubting that even Dhoni would have felt the strain.

It was a painful sight. Subsequent calls for his ouster from the T20 side only seem reasonable then.

"He should come in at four in T20s," suggests Anshuman Gaekwad, the former India opener and coach. "That way he can take his time and accelerate later." 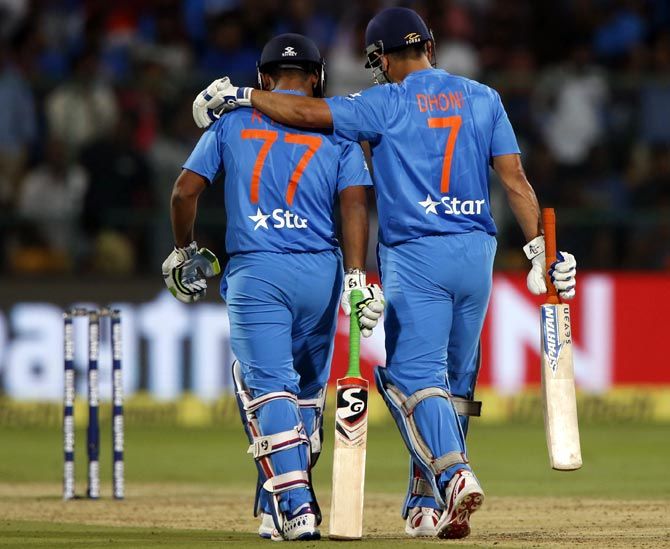 IMAGE: Dhoni, right, speaks to Rishabh Pant who has been touted by many as his successor.

The problem for Dhoni is that the T20 format -- no matter what position you bat at -- doesn't allow you that luxury.

Moreover, with Manish Pandey, Shreyas Iyer and Rishabh Pant -- all capable of going at it from ball one -- desperate to put down a permanent place in the team, Dhoni's indispensability is under genuine threat.

"Why can't you try Pant for a few games? It's just 20 overs. Dinesh Karthik can also be given a chance," says another former Indian player.

Even Dhoni's ability to hit sixes isn't quite up to speed with the modern game's astoundingly high standards.

He can no longer hit sixes when the game situation warrants one, something that new age cricketers such as Jos Buttler, Ben Stokes and even Kohli mostly accomplish with flourishing ease.

"He does hit sixes. But it's not the same. And at 36, you can understand that," says Gaekwad.

Clearly, the dynamism that once typified Dhoni's batting is spiralling into decline. And the fact that India is open to experimenting in the shortest format lends more weight to the argument in favour of Dhoni's departure. IMAGE: Dhoni works on his wicketkeeping skills during a training session.

It's not as if he hasn't tried to tweak his game to overcome the ponderous reflexes and the dwindling power that accompany a player when he reaches Dhoni's age.

The swapping of his much-loved Morrant pads for conventional ones and the introduction of a trigger movement in his batting stance are two evident changes that the former Indian captain has made.

Results have been mixed: Dhoni enjoyed a string of good scores against Sri Lanka and Australia, but rarely did his knocks threaten to culminate in the pyrotechnics that his batting once routinely served up.

Against the West Indies in Antigua earlier this year, Dhoni laboured his way to a 114-ball 54, eventually leaving it too late in pursuit of the hosts' 189.

One of his better batting efforts, an 88-ball 79 against Australia at Chennai in September, was overshadowed by a whirlwind 83 from Hardik Pandya.

"In the 50 over format, the team management has to clearly tell him what his role is. He can play the anchor role. The others around him can go at a faster pace," says a former India wicketkeeper, on the condition of anonymity.

But then Dhoni's place in the Indian team over the years has never been just about his batting -- a staggering thing to say about a man who is nearing 10,000 runs in one-day international cricket.

Despite no longer being skipper, he remains the side's chief tactician, a reputation that has only been burgeoned by his recent role as India's 'in-field captain'.

These days, Dhoni likes to take charge as Kohli patrols the fence during the death.

Kohli, otherwise the effervescent headline act, quietly soaks in the adulation of the crowd as Dhoni gets his traffic cop act on, moving fielders as he pleases.

Before a tense, potentially game-defining over, conversations are generally conducted among Dhoni, Kohli and the bowler; vice-captain Rohit Sharma seldom figures in the picture. That Kohli trusts Dhoni more than anyone else is clearer than ever.

"His inputs continue to be invaluable. There is so much experience there. So it's difficult to say that he's not contributing," adds the former stumper.

And his wicketkeeping -- embodied by an unorthodox, self-taught technique -- is still the finest the limited-overs game has to offer.

Occasions of him grassing catches are scarce; his stumping mojo continues to be unusual yet stupefyingly efficient. He even chips in with the odd run-out.

"It's difficult to find a 'keeper of this quality. No one in India is as good as him. So it becomes very difficult to drop him in either format," says a former Indian spinner.

Over the years, Dhoni has perhaps spoilt Indian cricket with his quality.

Karthik and Pant, two hugely talented batsmen who could slot in as replacements, are devoid of the multifarious talents that Dhoni has so effectively mastered.

But that isn't to say that his time in the Indian team is eternal. That his place in T20s is not a certainty is a damning reality now.

And despite a vote of confidence from Kohli, Dhoni well understands that eventually it will be his performance with the bat and not his fitness or wondrous wicketkeeping that will keep him in the team -- both in T20s and ODIs.

As captain down the years, Dhoni made sure that no one was 'undroppable'.

He sent players packing -- some of them so-called 'untouchables' -- when he felt their race was run.

Down the line, if he weren't to apply that to himself, he would be doing a massive disservice to that marvellous legacy. 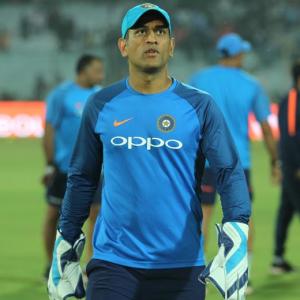