'The first thing Ponting told me that when you are captaining you can't be thinking about how you want them to do it.' 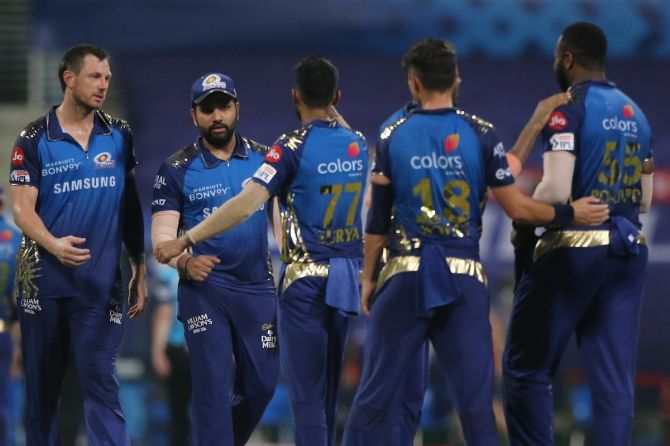 IMAGE: Mumbai Indians captain Rohit Sharma and his teammates celebrate the fall of a Kolkata Knight Riders wicket in the IPL match, at the Sheikh Zayed Stadium, in Abu Dhabi. Photograph: BCCI/IPL

Rohit Sharma, the Indian Premier League’s most successful skipper, has learnt from Australian batting great Ricky Ponting how to make everyone feel important in his team, something that played a part in his success at Mumbai Indians.

Having won a record four IPL titles, one more than Chennai Super Kings skipper Mahendra Singh Dhoni, he opened up on his team's success and how he likes to lead the team.

"I see how I can get little contributions from all the players. And, of course, my performance is also important," the India opener said on the first episode of India Today Inspiration season 2.

"I want to make sure that the 10 guys who are playing, and the other players on the bench, I should be talking to them and make them feel important. And that is something that I learned from Ricky Ponting."

Ponting is a former Mumbai Indians player and coach.

"The first thing Ponting told me that when you are captaining you can't be thinking about how you want them to do it. Always listen to them, take it in your stride and then filter it and give it to them. It was great learning for me when he was a part of Mumbai."

Asked how he looks after the youngsters to get the best out of them, Rohit said: "Those players will come out good or will be at their best when they are not under pressure, when there is not too much talking going on about them in the squad. They get to know all these things."