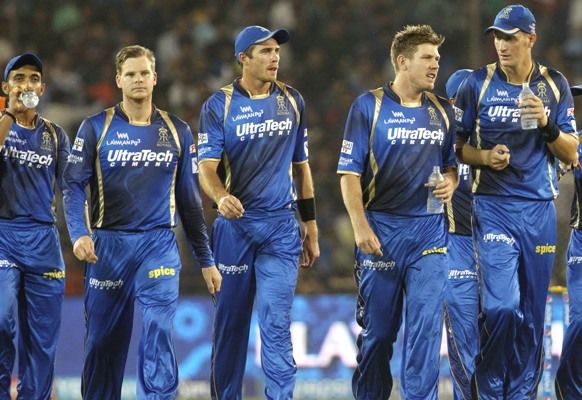 Looking to keep their winning run intact, table-toppers Rajasthan Royals face a stern SunRisers Hyderabad test in their fourth match of the Indian Premier League in Visakhapatnam on Thursday.

If Rajasthan have have been unbeaten in their three games so far, then the David Warner-led SunRisers have had a mixed run with a loss and a win in their two matches.

But after easing past Royal Challengers Bangalore in their previous game, SunRisers have a new-found confidence that may come good on their second home ground at the Dr. Y.S. Rajasekhara Reddy ACA-VDCA Cricket Stadium.

Rajasthan, with regular skipper Shane Watson unable to take field in the three matches so far, have been ably led by Steven Smith as the Jaipur-based franchise are looking like the team to beat in the tournament. Rajasthan Royals players celebrate the fall of a wicket during the Indian Premier League. Photograph: BCCI

If the side had it easy against Kings XI Punjab in its opening encounter, then getting past hosts Delhi Daredevils was indeed tough. But they showed true colors in their previous game after humbling Mumbai Indians by seven wickets.

Orange Cap holder Smith, who leads the run-scorers list with 122 in 3 games, led by example with an unbeaten 53-ball 79 to help Rajasthan achieve their 165-run target with five balls to spare.

Stars apart, the team has stood firm in its character of promoting local talent and young Deepak Hooda's half-century against Delhi at Feroz Shah Kotla once again brought a new face to the fore from the Rajasthan stable.

The pace attack, led by New Zealand's Tim Southee, has also looked potent with South African Chris Morris providing adequate support to his countryman.
Regular national faces Dhawal Kulkarni, Stuart Binny and Pravin Tambe continue to play their part with an able all-rounder in Australia's James Faulkner making it count whenever the chips are down. 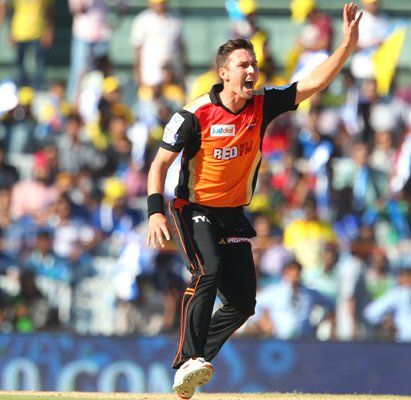 Trent Boult of the Sunrisers Hyderabad appeals for a wicket. Photograph: BCCI

The SunRisers bowing attack is no less with Trent Boult, Bhuvneshwar Kumar and Praveen Kumar making it work for the Hyderabad-based franchise.

The batting, led by Warner, has also got muscle with the likes of Shikhar Dhawan, Kane Williamson and Lokesh Rahul making up a solid top-order.

It was Warners and Dhawan's 82-run opening stand in their last game that helped SRH to overhaul their 167-run target in 17.2 overs.

If the two sides look evenly matched on paper then even their head-to-head record stands locked in four games. So a fierce T20 battle is up on the cards.