The 15th match of the ongoing Indian Premier League saw some records being set as Mumbai Indians ended Chennai Super Kings's winning streak with a 37-run victory at the Wankhede Stadium, in Mumbai, on Wednesday. Mumbai Indians registered their 100th victory in the IPL and became the first franchise to do so.

The team got to the milestone in their 175th match. The losing side is second with most victories, at 93, followed by Kolkata Knight Riders, with 88.

IMAGE: Dwayne Bravo has excelled for CSK with bat and ball. Photograph: CSK/Twitter

Dwayne Bravo has taken 100 wickets for the 'Yellow army' in the IPL. He also became the player with most expensive over this season after conceding 29 runs in the final over of the innings.

This is the highest number of runs conceded by a CSK bowler in an over. IMAGE: CSK captain Mahendra Singh Dhoni is third on the list of batsmen with most sixes in the IPL. Photograph: R Senthil Kumar/PTI

CSK captain Mahendra Singh Dhoni breached the 4000 run-mark for CSK. The 37-year old is also just nine sixes away from touching 200 sixes. He will vie with AB de Villiers, who has 192 sixes, to get to second in the list, headed by Chris Gayle who has 302. 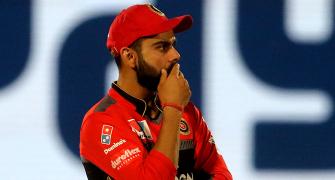 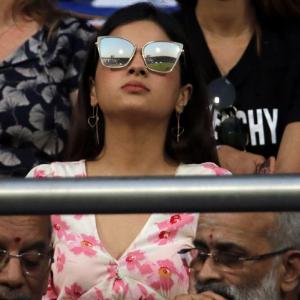