'He is playing Tests, ODIs and T20Is for Australia and he didn't take the responsibility as captain. He did not perform for Kings XI Punjab." 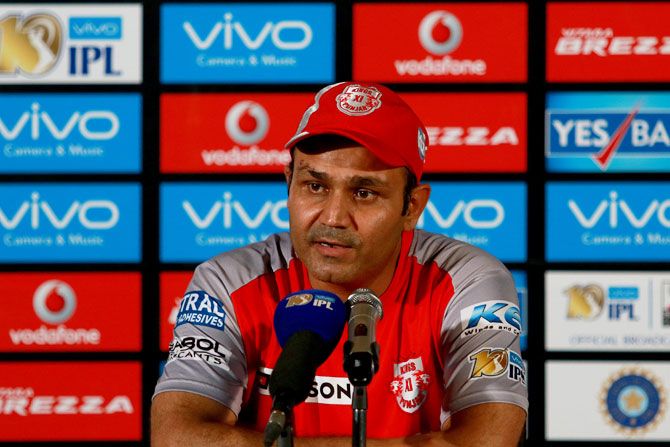 Kings XI Punjab's the team's director of cricket operations Virender Sehwag came down heavily at the team's 'irresponsible' batsmen, after Rising Pune Supergiant bowled them out for an embarrassing 73 (their lowest total) in their Indian Premier League match in Pune on Sunday.

RPS won the match by nine wickets to progress to the play-offs.

"(I am) very disappointed,” Sehwag said in the post-match press conference in Pune on Sunday.

"If our batsmen were more consistent, maybe we would be in the playoffs," Sehwag said.

He slammed the batsmen for going after the bowling.

“But they will only play according to how their thinking is. Perhaps they think T20 is for entertainment or only for hitting fours and sixes, but if they had assessed the situation and played, it wasn’t a 73-all-out wicket. If we had made at least 120-130, we would have been in the game. Our batsmen were very irresponsible.”

Sehwag was particularly critical of Punjab captain Maxwell, who scored 310 runs in 14 matches at an average of 31.

“We knew that if Maxwell clicks, he can win you the match, but he did not click in eight or nine matches for us," Sehwag said. “That was a big disappointment. He is playing Tests, ODIs and T20Is for Australia and he didn't take the responsibility as captain. He did not perform for Kings XI Punjab."

Sehwag also revealed that some of the foreign players complained about the pitch.

“I think they were complaining that the wicket was on the slower side, but you have played international cricket so much, you should get used to playing on all kinds of wickets – difficult or good wickets,” Sehwag said.

“There are very rare occasions when you get a good wicket to bat on. Whatever wicket you get, you have to play at least 20 overs, but (Glenn) Maxwell, Shaun Marsh, (Martin) Guptill and (Eoin) Morgan, (none of them played). Guptill and Morgan were the senior most experienced players, but none of them batted at least 12-15 overs. So, (I am) very disappointed.”

Sehwag admitted Punjab missed South Africa’s Hashim Amla, who scored two centuries this season but had to leave the squad earlier this week to join his national team.

“We missed Hashim Amla for sure,” Sehwag said.

“There is no player as consistent as him. He is an experienced player. He has 25-odd Test hundreds and as many in ODIs. He knows how to score irrespective of the format. He takes risks only after 10-12 overs (of settling in). The rest of our players, whether Indian or foreign, should learn a lot from Hashim Amla... But when your batsman is in form and he has to leave, someone else has to step up and bat with responsibility. That did not happen.”