Delhi Daredevils won the 'Battle of the Minnows' as they defeated Pune Warriors by 15 runs in the Indian Premier League in Raipur on Sunday.

Needing 165 to win, Warriors could manage only 149 for four despite a 76-run opening stand between Aaron Finch (37) and Robin Uthappa (37), at the newly built swanky Shahid Veer Narayan Singh International Stadium.

This was the Daredevils' second win in nine matches and they climbed a place to eight spot in the nine-team table. The win also technically kept them in the hunt for a place in the knock-outs. 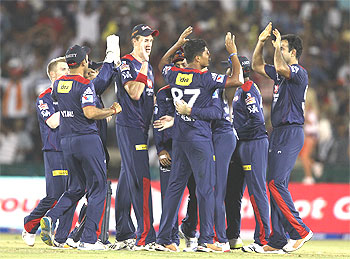 The Warriors, who have had an equally disastrous campaign, now languish at the bottom after their seventh defeat.

Umesh Yadav bowled a brilliant 18th over in which he dismissed Yuvraj Singh (31) and Luke Wright (19), giving away just two runs. The over turned out to be the game-changer as Warriors lost out despite two half-century partnerships.

Finch and Uthappa matched each other stroke-for-stroke as the Daredevils pace quartet of Irfan Pathan, Umesh Yadav, Ashish Nehra and Morne Morkel provided at least one 'boundary-ball' per over.

Not only did the two burly openers hit a flurry of fours but shoddy fielding helped them to take the ones and twos liberally.

The 50 came off 6.3 overs without much difficulty. A sense of purpose was lacking in the Delhi bowlers, as none of them bowled well enough to get a breakthrough.

If Umesh drifted on the pads, Pathan’s lack of pace became his undoing. Similarly, for Morkel, the batsmen used his extra pace while Nehra gave too much width.

At the halfway stage, Warriors had knocked off 75 runs before Pathan provided twin strikes in the 11th over. The first one saw Uthappa flick a delivery off his pads only to find Unmukt Chand at deep backward square leg and complete a fine catch. Uthappa scored 37 off 33 balls with four boundaries.

Finch (37 of 33 balls) got a faint edge down leg-side as Kedar Jadhav went up immediately and was joined by Pathan. The appeal went in favour of the bowler, while Finch looked unhappy.

Yuvraj and Wright did not take much time to settle down, with the former playing a lovely cover drive to announce his arrival. The duo added 50 runs in only six overs before both got out in quick succession to change the course of the match.

Earlier, David Warner assaulted the Pune Warriors bowlers in brutal fashion with the Daredevils posting a competitive 164 for five after they were put in to bat.

Warner blasted his way to an unbeaten 25-ball 51 as he saved the Daredevils from what could have been another woeful batting performance.

Credit should also be given to Kedar Jadhav (25), who played second fiddle to Warner to perfection, as the duo added 63 runs in only 5.5 overs to put the home team on a pedestal. Jadhav hit two sixes in his 19-ball knock.

Warner hit four boundaries and four huge sixes with 21 runs coming off the penultimate over bowled by Kane Richardson. In fact, three of his four sixes were hit off Richardson, who bowled the right length to be smashed over the ropes. The final five overs yielded 63 runs with 96 runs coming off the back 10.

Warner, who is Daredevils' highest scorer in the league by a distance, scored his third half century despite coming in to bat at number four.

overs before he opened up. Bhuvneshwar Kumar was hit for a straight six and a boundary and he repeated with another pulled six off a slow bouncer from Luke Wright.

Just when it looked that the veteran opener was getting into the groove for a big score, Sehwag failed to read a slow bouncer from Dinda and committed early to a pull shot only to be caught by Robin Uthappa behind the stumps. Sehwag made 29 off 26 balls with two boundaries and a couple of sixes and was out in the 10th over.

Unmukt Chand (17), drafted in place of Manprit Juneja, did precious little to help his case. During his 19-ball stay, he looked scratchy and failed to find the gaps on most occasions.

When Rahul Sharma bowled a straighter one, the former India Under-19 skipper rocked back to play the cut shot but a faint edge was smartly snapped up by Uthappa. From 68 for one, it suddenly became 68 for three, when Rohrer joined hands with Warner.

Warner's first attacking shot was a slogged six off Rahul as Rohrer was content playing singles. The duo added 28 runs in only 3.2 overs and recovery looked imminent.

Rohrer (13) tried an expansive drive off Abhishek Nayar but Uthappa, standing up to a medium pacer, showed razor-sharp reflexes to take his third catch of the innings.

Warner continued to wage a lone battle as he smacked Richardson over deep square leg for a second six.

The stocky Warner punished Dinda, who conceded 13 runs in his third over and the 17th of the innings, with the Aussie hitting three boundaries. 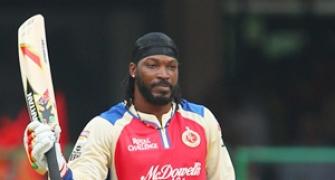 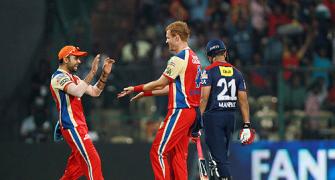 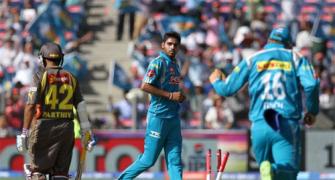 I can be effective with old ball too: Bhuvneshwar 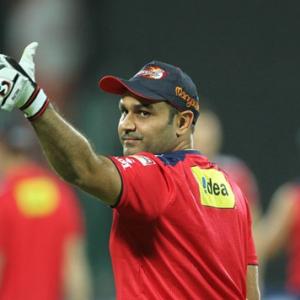