Mumbai Indians turned in a superb all-round showing with bat and ball to trounce Kings XI Punjab 48 runs in the IPL match, at the Sheikh Zayed Stadium, in Abu Dhabi, on Thursday.

Put in to bat, the defending champions overcame an early wobble thanks to brilliant batting by captain Rohit Sharma, and Kieron Pollard and Hardik Pandya in the late overs, to put up an imposing 191 for 4. In reply, Kings XI failed badly after the early departure of Mayank Agarwal (25), Karun Nair (0) and Lokesh Rahul (17) by the ninth over.

Even though Nicholas Pooran scored a breezy 44 off 27 balls in the middle overs, there was not much they could do against some accurate bowling by the Mumbai bowlers, led by Jasprit Bumrah, who finished with figures of 2 for 18 in his four overs. Trent Boult (1-42) and Krunal Pandya (1-27) took a wicket each as Mumbai convincingly registered their second victory in four matches and moved atop the league table. Earlier, Rohit's 75 off 45 balls, which included 8 fours and 3 sixes, was the cornerstone of Mumbai's huge total despite the early setbacks. Following the dismissal of opener Quinton de Kock (0) and Ishan Kishan, who failed to get going during his 32-ball 28, Rohit, who aggregated 5000 IPL runs with a glorious cover drive off his first stroke of the innings and joined Virat Kohli and Suresh Raina in the elite club, took up the responsibility of accumulating runs before Kieron Pollard (47) and Hardik Pandya (30) blazed away in the final overs to swell the total.

Mumbai Indians had a disastrous start as Kings XI pacer Sheldon Cottrell cleaned up de Kock with the fifth delivery of the first over of the match. Looking to whip the out-swinging delivery, de Kock played all over and looked behind to find his stumps rattled. If that was not enough, Suryakumar Yadav was out in the fourth over, and Mumbai Indians just 21 for 2 on the board.

After two dots, Rohit played the ball down the ground and called for a tight single. Yadav was slow off the track and run-out by a superb direct hit at the stumps from Mohammed Shami. He was gone for 10. The onus was on Rohit and Ishan to revive the innings. But, unlike the other night when he scored 99 off 58 balls against Royal Challengers Bangalore, Ishan failed to get going. His struggle for 28 runs off 32 balls, including a four and a six, ended when his attempted slog-sweep down on one knee found Karun Nair at deep mid-wicket. Mumbai Indians were reeling 87 for three at the end of the 14th over, but upped the ante with Pollard and Rohit hitting a six each off leg-spinner Ravi Bishnoi to collect 15 runs from the 15th over.

Rohit then scored 22 runs off the 16th over, bowled by James Neesham. After he was out, it was then left to the pair of Pollard and Hardik Pandya to provide the final flourish. They smashed fours and sixes at will, scoring 67 runs off only 25 balls.

Mumbai then scored 25 runs in the final over, Pollard sending Krishnappa Gotham's last three deliveries into the stands. 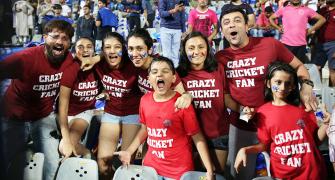 How NCA got Mavi, Nagarkoti up and running in 2 years