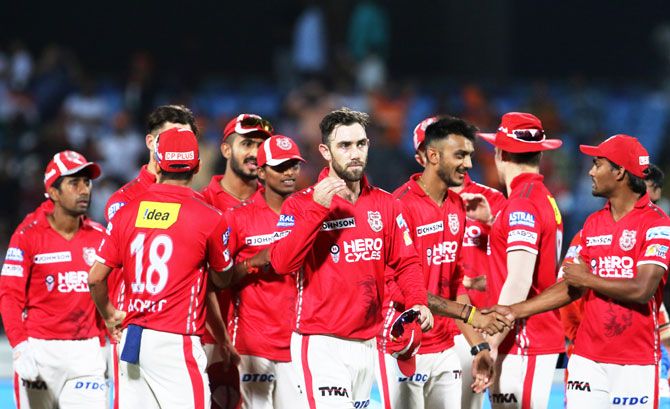 Kings XI Punjab rode on the batting of Hashim Amla and their bowlers to overpower Gujarat Lions to win by 26 runs in their Indian Premier League match in Rajkot on Sunday.

Dinesh Karthik scored a fighting fifty (58 off 44) but it went as vain as the Lions kept losing wickets at crucial junctures to make a hash of the chase.

But it was the crucial death overs, starting with the 18th over bowled by Natarajan that eventually made the difference. He gave away just five singles and one wide in the over to ring the death knell for Gujarat Lions.

With this win, Punjab have moved up the points table, while the Suresh Raina-led Gujarat Lions are now languishing at the bottom. 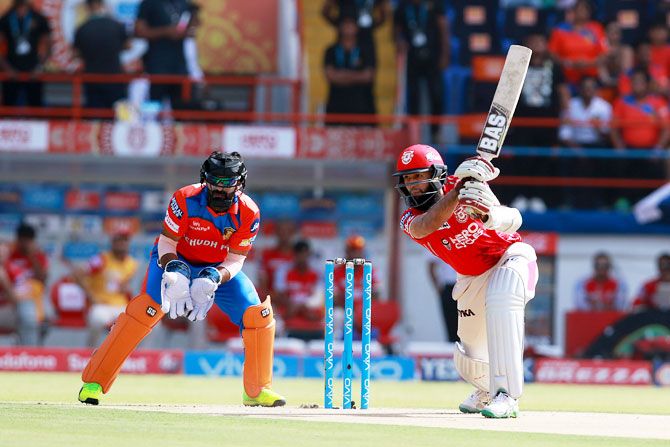 IMAGE: Hashim Amla once again came good for Kings XI Punjab with a well made 65 off 40 against Gujarat Lions during their IPL match on Sunday. Photograph: BCCI

Amla hit 65 off 40 balls with nine boundaries and two sixes to set the platform while Axar's 34 off 17 balls enabled the Kings XI Punjab to reach a fighting total after 20 overs.

Shaun Marsh (30 off 24 balls) and Glenn Maxwell (31 off 18 balls) also made useful contributions.

Amla started from where he had left against Mumbai Indians the other day. When Suresh Raina introduced rookie leg-spinner Shivam Agarwal, he was hit for two boundaries – a cover drive and a back cut.

He launched a furious assault on Andrew Tye, hitting him for two boundaries and a six over long-on. An inside out six over extra cover off Ravindra Jadeja was followed by a flick as he went into the 40's.

Anything outside the off-stump was driven and the ones on the legs were whipped en route his third 50-plus knock in the tournament.

He put on 70 runs for the second wicket with Marsh while another 47 runs were added with skipper Maxwell.

Amla was looking good for another hundred before leg-spinner Agarwal held on to a low return catch.

Maxwell, who had hit three sixes and looked set for a few more, was out due to lack of discretion while trying a reverse sweep off Jadeja, which went all awry.