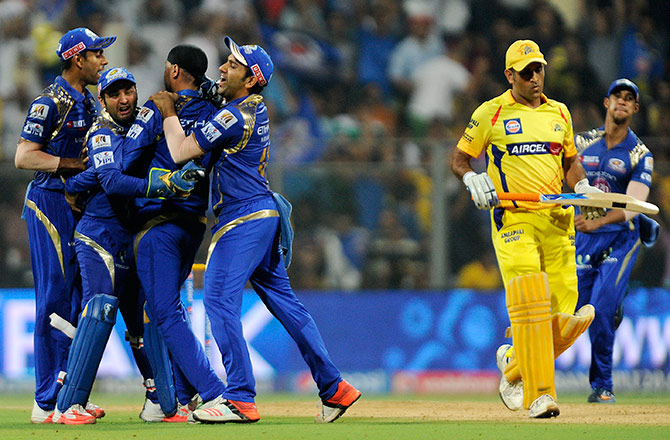 Mumbai Indians became the first team to qualify for the final of the Indian Premier League with a comfortable 25-run win over Chennai Super Kings at the Wankhede stadium.

The former champions, who started the tournament with four straight reverses, then won nine of their last 11 matches.

That impressive run helped Mumbai qualify for the final - to be held at the Eden Gardens (Kolkata) on the 24th - for a third time. While they lost to Chennai in the 2010 decider, they did beat the same opponents to the title three years later.

Chennai get a second shot at the decider, on captain MS Dhoni's home turf (Ranchi) at that. Earlier, Lendl Simmons continued his impressive show by notching up a well-made 65 as Mumbai Indians posted 187 for six.

Simmons, who notched up his fifth half century of the competition, struck five sixes and three fours in his 51-ball innings.

Along with Parthiv Patel (35), Simmons provided a solid opening stand of 90 runs at nearly nine runs an over - at the end of the 10th over the home team had made 86 for no loss - before Mumbai lost quick wickets between the 11th and 16th overs to be in some sort of bother at 139 for four. 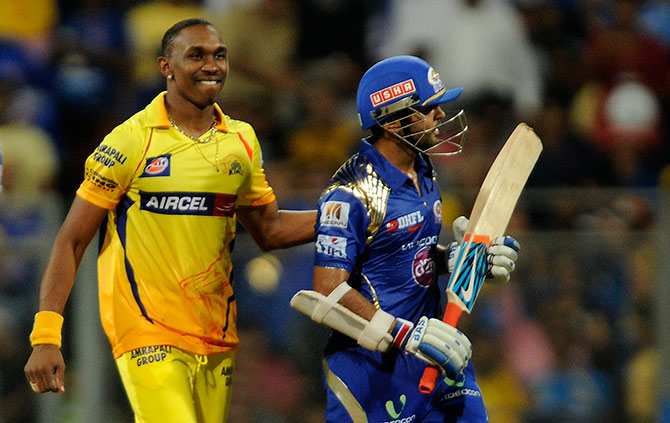 Dhoni summoned Dwayne Bravo to stem the run flow and the ebullient West Indian all rounder clicked by having Patel caught at long on to reach a landmark of 100 IPL victims in his 89th game.

In doing so Bravo became the first player to complete the dual milestone of 1,000 runs and 100 wickets in the IPL.

Bravo also took the crucial wickets of Mumbai captain Rohit Sharma (19) and Kieron Pollard (41) to finish with figures of three for 40, taking his tally for the tournament to 23. 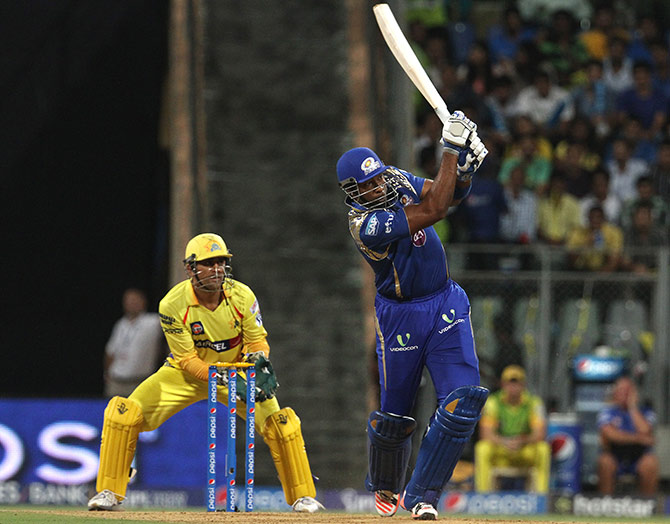 It was then left to Pollard to smash five huge sixes along with a boundary in just 17 balls to take Mumbai closer to the 200-run mark.

The Trinidadian, who started off with two sixes in a Pawan Negi over, blasted a quick-fire 41.

It was Pollard who kept hitting big shots as Mumbai reached par score in the end. 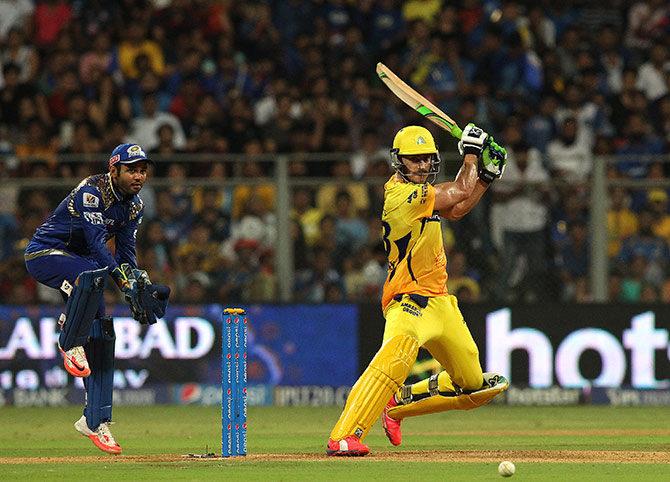 Chasing a formidable target Chennai got off to a worst possible start when Lasith Malinga (three for 23) had Dwayne Smith (0) out leg before off the fourth ball.

Faf du Plessis (45) and Michael Hussey (16) added 46 runs, off just 27 balls, for the second wicket before R Vinay Kumar had the latter caught behind.

The South African then added a further 40 runs with Suresh Raina (25) for the third wicket before Harbhajan Singh (two for 26) took wickets off successive deliveries to derail the Chennai chase.

Harbhajan first caught Raina off his own bowling before having MS Dhoni out leg before.

When Jagadeesha Suchith had Du Plessis caught by Vinay Kumar at long-on, the writing was on the wall for the two-time champions. The South African's 34-ball innings was inclusive of five hits to the fence and one over it.