Kolkata Knight Riders put up a clinical performance to beat Kings XI Punjab by an emphatic eight-wicket margin in an Indian Premier League match in Mohali, on Wednesday.

Riding on a disciplined bowling and fielding display, KKR first restricted Kings XI to 124 for seven after the hosts had elected to bat, and then skipper Gautam Gambhir led from the front with a fine unbeaten half-century to overwhelm the target with 21 balls in hand.

Gambhir scored an unbeaten 66 off 44 balls with the help of seven fours and a six to hold the chase together and guide his team to victory.

Gambhir was ably supported by Jacques Kallis, who scored an unbeaten 30 off 23 balls. The duo stitched unconquered 53 runs for the third-wicket as KKR scored 127 for two in 16.3 overs. 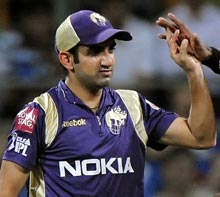 Earlier, Kings XI batsmen lost wickets at regular intervals to be restricted to the modest total after opting to bat at the PCA stadium.

Captain Adam Gilchrist, who retired hurt in the sixth over with a right hamstring problem only to return later to drag his side out of trouble, top-scored with an unbeaten 40, while Shaun Marsh made a 30-ball 33 with the help of four boundaries.

Kings XI batsmen struggled from the onset against a determined KKR bowling line up and it could be gauged from the fact that only three of their batters could manage double figures.

Wily West Indian off-spinner Sunil Narine (2/24) and Brett Lee (2/26) starred with the ball for KKR, sharing four wickets between them. Lakshmipathy Bajaj (1/20) and Raja Bhatia (1/23) also picked up a wicket each for the visitors.

KKR's started their run chase on a blistering pace, racing on to their fifty inside the sixth over.

Brendon McCullum (15) was the initial aggressor as he clobbered Praveen Kumar for two boundaries in the first over.

KKR skipper Gautam Gambhir matched his partner stroke by stroke and welcomed Harmeet Singh with a huge six over mid-wicket and a four in the bowler's opening over.

After the initial burst, McCullum found boundaries hard to come by, which finally led to his dismissal. Struggling to score freely, the Kiwi hit a Piyush Chawla's (2/19) short, way down the leg side delivery straight to Dmitri Mascarenhas at short fine-leg, but not before stitching a 53-run opening stand with Gambhir.

Chawla picked up his second wicket four overs later when Manvinder Bisla (11) dragged a delivery on to his stumps.

Gambhir, on the other hand, played a calm and composed innings and notched up his half century in just 36 balls.

In Kallis, Gambhir found a perfect partner as they duo went about their business in style.

Kallis struck little-known Bhargav Bhatt for back-to-back four and a six to finish off the run chase in emphatic fashion.

Earlier, Kings XI's last year's hero, Paul Valthaty once again disappointed as he fell early, outside edging a Lee delivery to Bisla behind the stumps in the third over.

To make matters worse for Kings XI, Gilchrist had to retire hurt in the sixth over.

Kings XI failed to get a substantial partnership as Mandeep Singh (6), Marsh, David Hussey (10), Paras Dogra (6) and Mascarenhas (9) all departed in quick intervals.

Marsh's dismissal in the 14th over, however, turned out to be a little controversial.

The left-hander under edged an attempted cut off a Lee delivery which just seemed to have carried to Bisla behind the wicket. But the batsmen walked straight away only after checking with the keeper despite there being some doubts with the catch.

The dismissal also brought Kings XI owner Preity Zinta on to the ground as she was not satisfied with the decision. She, however, left the field only after Gilchrist intervened.

Towards the end, Gilchrist and Chawla (9) tried their level best to shoot up the run rate but failed. 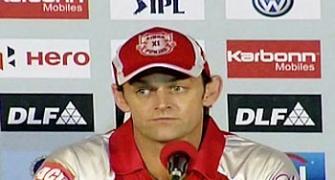 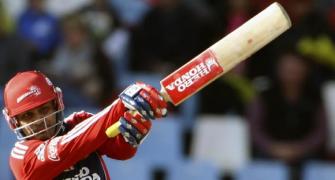 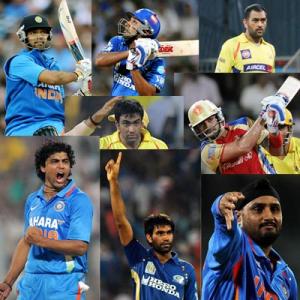 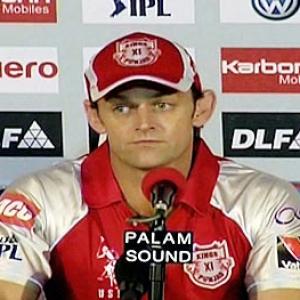