A superb all-round performance from Jacques Kallis and magnificent bowling by Sunil Narine helped Kolkata Knight Riders edge past Royal Challengers Bangalore by five wickets in a thrilling finish in Ranchi on Sunday, to keep alive their faint hopes of reaching the play-offs stage of the Pepsi Indian Premier League.

Opting to field, KKR restricted RCB to 115 for nine, and then chased down the modest target with four balls to spare at the JSCA International Stadium Complex.

Narine finished with impressive figures of four for 22, while Kallis and Lakshmipathy Balaji claimed two wickets each.

Kallis also top-scored for KKR with a responsible knock of 41 off 45 balls on a slow wicket where strokeplay was not easy. 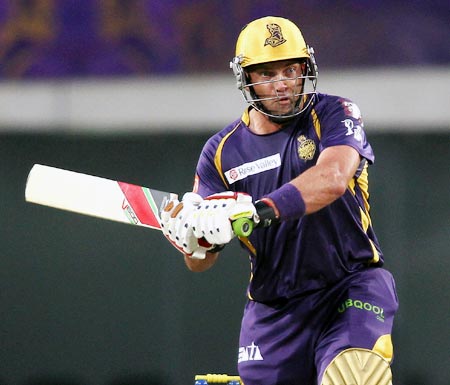 After doing a good job with the ball, KKR were dealt an early blow as Manvinder Bisla was sent back by Ravi Rampaul in the first over of the innings.

Gautam Gambhir and Kallis steadied KKR with a 31-run partnership for the second wicket.

In the fourth over bowled by Abhimanyu Mithun, the KKR skipper scored three successive fours -- all through the off-side to release the early pressure.

However, what was turning out to be a promising stand, was cut short as R Vinay Kumar induced a thick outside edge off the blade of Gambhir for Chris Gayle, the lone slip fielder, to pounce on to the offering.

Yusuf Pathan arrived, and straightaway got into the groove, hitting Murali Kartik's tossed up delivery for a massive six over long-on. The all-rounder from Baroda then guided Jaydev Unadkat for a boundary with an upper cut.

But, as had been the case in the past, Pathan again got out after getting a start, trapped in front while going for a sweep shot against Kartik.

Kallis was going steady at the other end, helping the hosts close in on the target. The South African veteran though was dismissed in the end to make the match a bit interesting.

After hitting Mithun for two fours Kallis tried to hit one down the ground but holed out to Moises Henriques at mid-on.

Manoj Tiwary made 24 from 27 balls but he also threw his wicket away towards the end as he was caught by Virat Kohli in the covers off Vinay.

Needing five off the last over, Ryan ten Doeschate sealed the issue in KKR's favour with a boundary off the second ball of the over bowled by Vinay.

Earlier, on a slow wicket, RCB struggled to get going.

Chris Gayle found the going tough, hitting just one four and a six for his 33, before being stumped off Narine's bowling.

AB de Villiers was the next best scorer with a 22-ball 28. Attempting a reverse sweep off Balaji immediately after hitting the paceman for a six in the 16th over, the South African only managed an edge and Bisla took a well-judged catch.

Gambhir began with spinner Sachitra Senanayake and Balaji and the two bowlers provided a superb start by giving away just 16 runs in the first five overs. Senanayake dismissed Cheteshwar Pujara in the fifth over and Gayle was also subdued.

Narine and Kallis were introduced into the attack and they were successful in keeping Gayle and Virat Kohli quiet.

The runs came in ones and twos with KKR bowlers not allowing the batsmen to swing their arms freely.

Kohli and Gayle smashed ten Doeschate for 14 runs for RCB's best over. Kallis then dealt RCB a blow when he bowled Kohli, who dragged one back on to his stumps, as Bangalore managed just 54 for two in 10 overs.

The story remained the same in the next 10 overs and whenever the batsmen tried to cut loose, they only ended up losing their wickets. 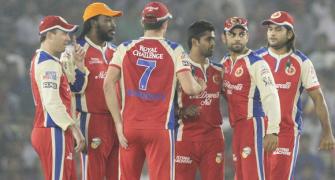 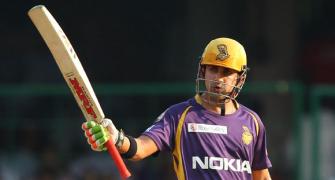 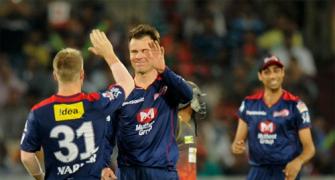 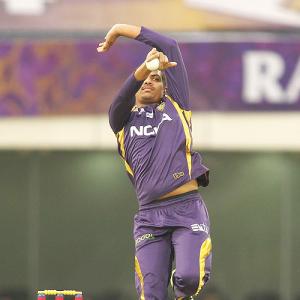 How the IPL teams are placed after 60 matches