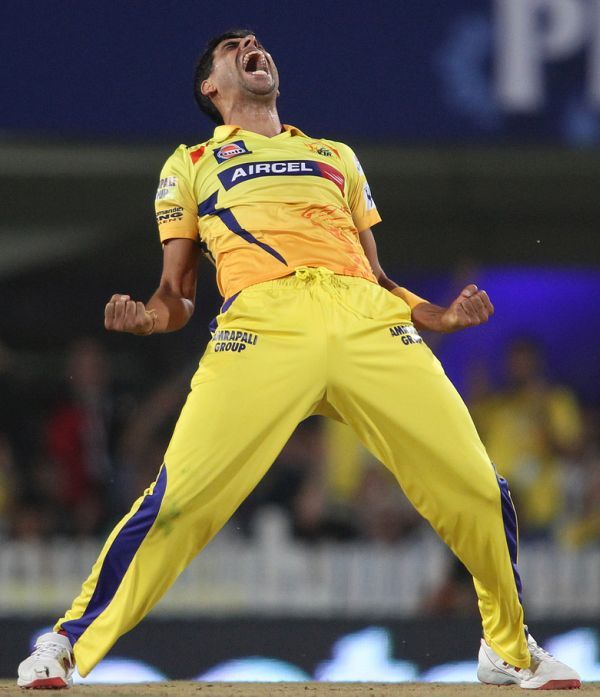 A clinical Chennai Super Kings defeated Royal Challengers Bangalore by three wickets in a nail-biting second qualifier to sail into the final of the Indian Premier League cricket tournament in Ranchi, making it a record sixth appearance in eight editions of the event.

CSK rode on veteran Mike Hussey's 56 off 46 balls to chase down the modest 140-run target with just one ball to spare.

Opening the batting, Hussey, the Mr. Cricket who will be 40 in another five days, anchored the CSK innings with his vast experience and decorated his knock with three boundaries and two sixes.

CSK will now face Mumbai Indians in the summit clash of the tournament in Kolkata on Sunday. 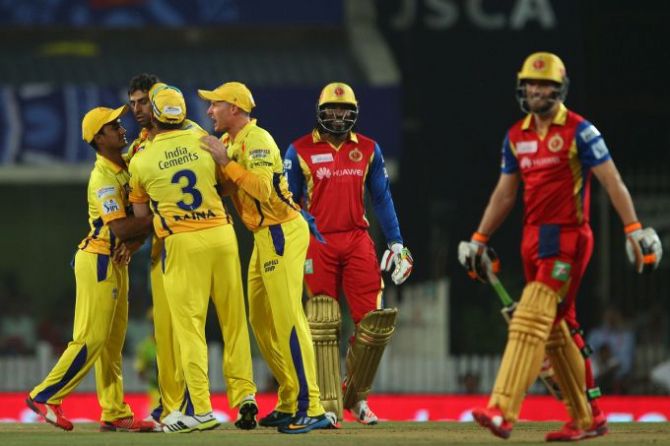 Earlier, left-arm pacer Ashsih Nehra shone with the ball as CSK produced a fine bowling display to restrict RCB to a modest 139 for eight.

Chris Gayle top-scored for RCB with an unfamiliar 41 off 43 balls which was studded with two fours and three sixes.

Young Sarfaraz Khan (31 off 21 balls) played short little cameo towards the end to give RCB bowlers something to defend. Dinesh Karthik (28 off 26) also played a good hand but just when his team need him, the wicket-keeper batsman perished in search of quick runs. 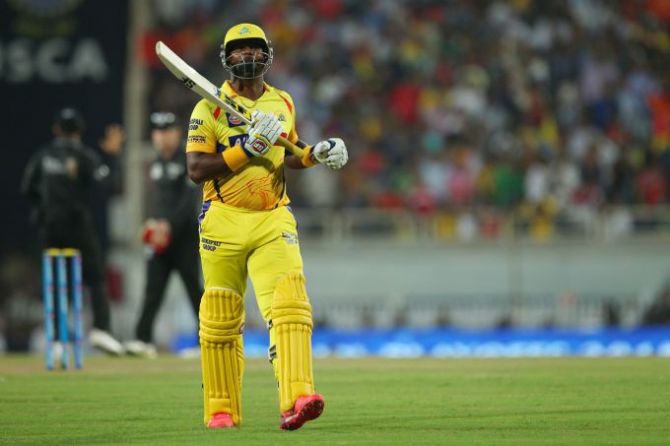 Dwayne Smith of Chennai Super Kings walks back to the pavilion after being dismissed. Photograph: BCCI

Chasing the modest score, CSK started on a bright note with Dwayne Smith racing off to 17 off just 11 balls with the help of three boundaries.

But just when he was looking dangerous Smith departed in the first ball of the fourth over, caught by Mitchell Starc off Sreenath Aravind as the batsman went for a short-arm pull.

It could have been double blow for CSK in the next delivery had Gayle not dropped new man Faf du Plessis at the first slip.

After Du Plessis, it was time for Hussey to get a life as wicket-keeper Dinesh Karthik fumbled a sharp outside edge off David Wiese's bowling in the seventh over.

Even though ground fielding disappointed the side, RCB bowlers did their best to keep CSK in check by maintaining some tight line and length. 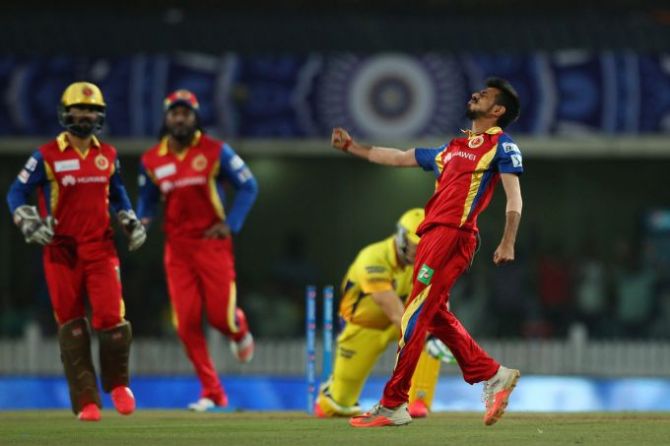 Young leg-spinner Yuzvendra Chahal (2/28) brought RCB right back into the match by striking twice in the 10th over.

Chahal first bowled Du Plessis and a ball later sent Suresh Raina back to the pavilion for a duck when the batsman lofted one straight to Wiese at long-off.

Thereafter, Hussey and captain Mahendra Singh Dhoni (26) played tactically by rotating the strike with ones and twos but opened up when the opportunity arrived. With abundance of experience behind his back, Hussey never panicked even when the asking rate hhot up. He found the boundaries for his side when needed. 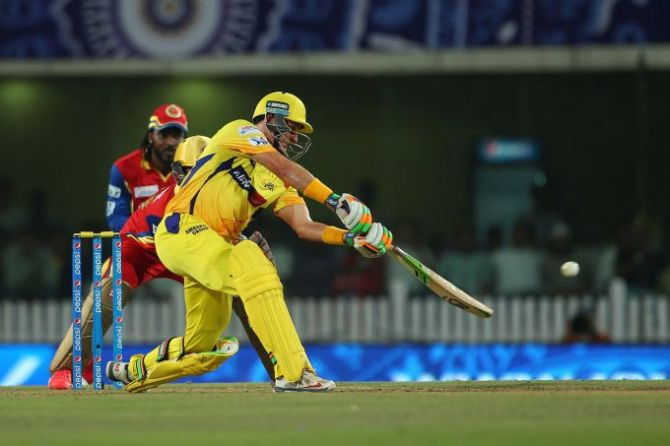 Mike Hussey of Chennai Super Kings hits one to the fence. Photograph: BCCI

With CSK needing 49 off 30 balls, Hussey clobbered Chahal straight over his head for two sixes to register his maiden fifty in the ongoing edition of the tournament.

But soon after bringing up his fifty, Hussey departed, caught by Harshal Patel off Wiese.

Thereafter, Pawan Negi (12 off 6), in Dhoni's company, brought CSK in striking distance of the chase with the some lusty shots.

But there was some drama still left in the match as Negi and Dwayne Bravo got out in the 19th over. While the former was run out, Starc cleaned up Bravo for a duck.

With one run to win, Dhoni edged one to Karthik behind stumps but Ashwin ensured there was no further hiccups for CSK, bringing up the required one run in the next ball. 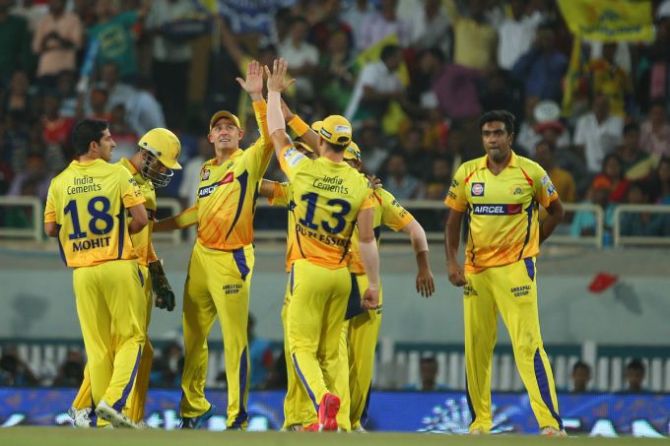 Chennai Super Kings players celebrate after a fall of a wicket. Photograph: BCCI

Earlier, sent into bat Gayle and skipper Virat Kohli made a steady start to RCB's innings on a slow and difficult pitch.

Gayle smashed Nehra for a six in the second ball off the innings to make his intentions clear.

In his next over, Nehra once again was at the receiving end, this time Kohli smacked the left-arm pacer for a four and six in consecutive balls.

But Nehra had the last laugh as he struck twice in his next over to rattle RCB's innings.

First Nehra removed Kohli, who flicked the first delivery off the fifth over straight to Mohit at short fine leg and then four balls later he dismissed in-form AB de Villiers.

De Villers was adjudged LBW after he missed an inswinger that struck his back pad but TV replays showed the ball pitched just outside the leg stump.

The twin blow dealt a severe blow to RCB's innings as even big-hitting Gayle found it difficult to rotate the scoreboard, leave aside hitting big shots.

Last match's half-centurion Mandeep Singh failed to rescue his side today and was the next to depart, caught by Mike Hussey off Ashwin as RCB slumped to 36 for three. 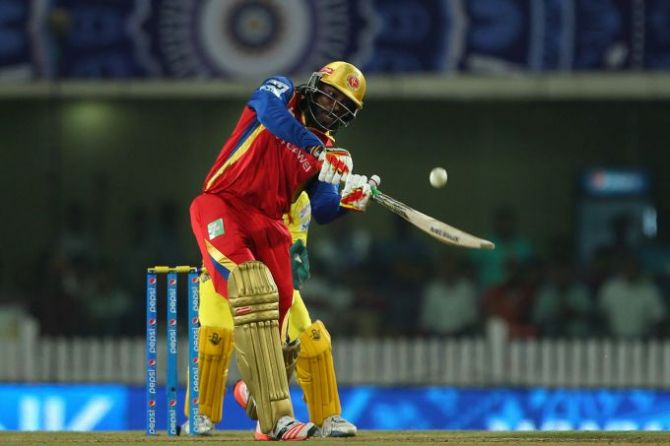 In a real spot of bother, Gayle and new man in Karthik joined hands and tried to resurrect RCB's innings with a 46-run fourth wicket stand. The duo found runs hard to come by but stuck in there and waited for their opportunity.

After a lull of few overs, Karthik finally opened up, hitting Raina for back-to-back fours in the 12th over.

Gayle was not to be left behind as he struck Raina for consecutive sixes in his next over. But Raina took his revenge a ball later when the West Indian top-edged a pull shot straight to the bowler while going for too many big shots.

But Sarfaraz was not to be bogged down as he welcomed Ravindra Jadeja with consecutive  fours in the 16th over.

In the next over Karthik was holed out at the deep by Mohit as Nehra picked up his third scalp of the day.

Sarfaraz then used his long handle to pick up a few boundaries while David Wiese (12) failed to capitalise on a life as RCB finished on 139.