Kolkata Knight Riders stormed into the final of the Indian Premier League on the back of a convincing 28-run win over Kings XI Punjab, with pacer Umesh Patel hogging the limelight with a fine display of fast bowling.

Defending 164 on a slow surface that remained under cover for three days, KKR speedsters Yadav (3/13) and Morkel (2/23) shared five wickets between them, while Piyush Chawla also bowled smartly to restrict Kings XI Punjab to 135/8 in 20 overs and hand KKR a record eighth victory on the trot.

In pursuit of a second title, 2012 champions KKR will take on the winners of second qualifier in the summit clash on June 1.

Orange Cap holder Uthappa once again laid the foundation with the help of four boundaries and two sixes in his 10th consecutive 40-plus score, to push KKR's total in a rain-interrupted match.

With KXIP at 17/1 in 3.2 overs, drizzle had started to fall and they were well behind the Duckworth-Lewis equation of 37 required from five overs. The umpires, though, decided to continue with the proceedings.

Manan Vohra smacked Shakib Al Hasan for two consecutive sixes in the next over to make the equation in KXIP's favour with the scoreboard reading 39/1 from five overs.

But KKR bounced back to dismiss Vohra when Morkel had the opener in the next over to make the D-L equation in the home team's favour. 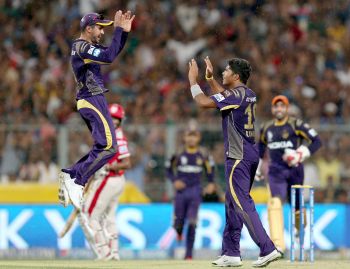 Dangerman Glenn Maxwell (6) did not last long and was trapped by Yadav and KXIP were 55 for three in 7.5 overs, 11 runs behind the par score.

It was Saha, who looked steady in the middle and kept KXIP in the hunt with some stunning strokes, but Morkel ensured that the wicketkeeper-batsman did not prolong his innings.

David Miller was dropped on 1 but he could not make it count and was castled by Piyush Chawla, while Yadav claimed his third victim in the form of the skipper George Bailiey.

Earlier, the spinning duo of Karanveer Singh and Akshar Patel shared five wickets between them to help Kings XI Punjab bounce back, before KKR struck 15 in the last over to prop up the total.

Put into bat, KKR were 2/1 in 1.2 overs but Robin Uthappa and Pandey repaired the damage, putting on 65 runs in just 42 balls to turn their fortunes around.

Continuing his dream run, Uthappa slammed 42 from 30 balls with four boundaries and two sixes, while Pandey extended fine support with a 20-ball 21.

But before KKR could break loose, KXIP essayed a comeback through left-arm spinner Patel (2/11) and leg-spinner Singh (3/40) on a slow wicket that had remained under cover for three days due to incessant rain.

First it was Patel who gave the breakthrough claiming Uthappa and Pandey in his third over, before Singh struck twice in two balls dismissing the hard-hitting duo of Shakib Al Hasan (18) and Yusuf Pathan (20) to bring on the untested KKR lower middle-order.

When KKR were 113/5 in 15.4 overs, rain suspended play for 25 minutes and the field was brought under cover once again.

The blows did not hurt KKR's cause much as Surya Kumar Yadav struck a quick 20 from 14 balls (3x4, 1x6) while Ryan ten Doeschate slammed a 10-ball 17, which was studded with two sixes.

The match was originally scheduled at 8pm yesterday but had to be postponed to the reserve day today due to heavy downpour over the last three days. The winners will seal a final berth while the losing team will get another chance and play the second qualifier.

Mitchell Johnson gave an early breakthrough in the form of KKR skipper Gautam Gambhir when the left-hander pulled one for his KXIP counterpart Bailey to take a fine rising catch at mid-on.

The outfield looked slow and KKR's run-rate too was slower - 14/1 in the first three overs -- with the first boundary coming as late as in the 18th ball.

Before it could get any worse, Uthappa continued his dream run and took on Johnson, pulling the Aussie pace spearhead over deep square-leg for a six and followed it up with a boundary in an over that yielded 17 runs.

It was the turnaround KKR were looking for and Uthappa stepped out to Awana in the next over and hit two boundaries.

Uthappa smacked his second six with an effortless scoop over the sightscreen as KKR raced to 55/1 in the powerplay.

Pandey, too, gave a fine support at the other end in the entertaining partnership before left-arm spinner Patel struck twice in his third over, claiming both Uthappa and Pandey.

Uthappa was caught by David Miller while trying to clear long-off while an unlucky Pandey was bowled after the ball hit the batsman's thigh before knocking off the bail in a space of three balls.
Image: Umesh Yadav
Photograph: BCCI 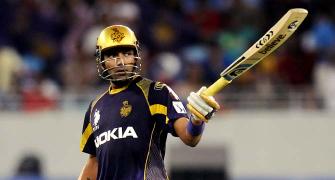 The IPL's Top 10 batsmen after the league stage 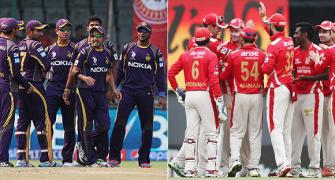 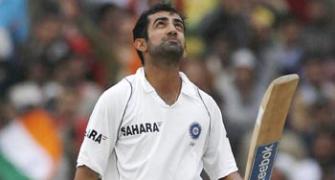 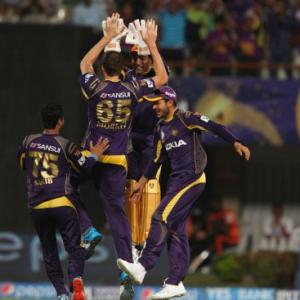 'Kolkata have got the ammunition to win the title'