Delhi Daredevils paid the price for shoddy batting as they virtually crashed out of the IPL losing to Sunrisers by eight wickets via D/L method in an encounter interrupted by intermittent showers.

Sent into bat, Delhi frittered away a good start to post a modest 143 for seven in the game which witnessed as many as four rain interruptions, forcing the D/L method to come into effect. Sunrisers need 43 off five overs and they knocked off the runs in 4.2 overs to log home full points.

Daredevils have now lost seven out of nine matches and are well on course of finishing as 'Wooden Spooners' in the seventh edition of the cash-rich league.

It was another pathetic display by Daredevils batsmen and JP Duminy (4)'s failure meant that they scored only 22 in the last five overs with both Dale Steyn (2/20) and Bhuvneshwar Kumar (1/23) turning out to be unplayable in the end.

The match saw as many as four interruptions. The first 73 minutes rain break during Delhi's innings hardly had any impact on the match but the next three interruptions brought the D/L method into picture. 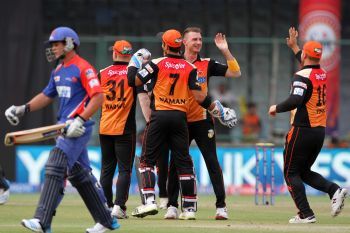 The second rain interruption occurred just before the start of the second innings which set a revised target of 115 runs off 15 overs befor the Sunrisers.

The heavens again opened up for a brief period when Sunrisers were on 11 for no loss in 1.1 overs after which the Sunrisers were set a new revised target of 97 runs off 12 overs.

The ground staff of the Feroze Shah Kotla stadium had a busy day in office as another little drizzle came to spoil the party for an astonishing fourth time in the match.

The downpour did not last long but brought D/L method into equation again. The match was later reduced to five overs and under the revised target, Sunrisers required 43 runs for a victory.

As Sunrisers had already scored 17 runs off two overs for the loss of captain Shikhar Dhawan's wicket, the Hyderabad outfit need 26 more runs off 18 balls when play resumed again.

Sunrisers lost Aaron Finch's wicket but Naman Ojha (13 not out) and David Warner (12 not out) ensured the win for their side by overwhelming the target with four balls to spare with eight wickets in hand.

It was Ojha who finished off the chase in style with a six off Laxmi Ratan Shukla. 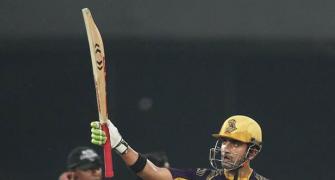 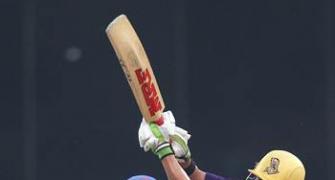 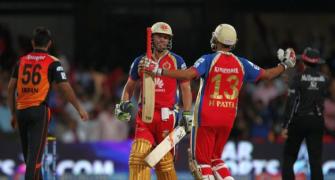 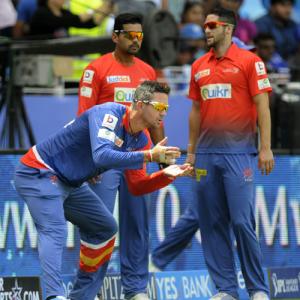 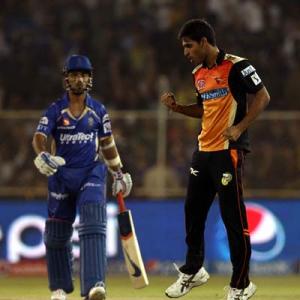