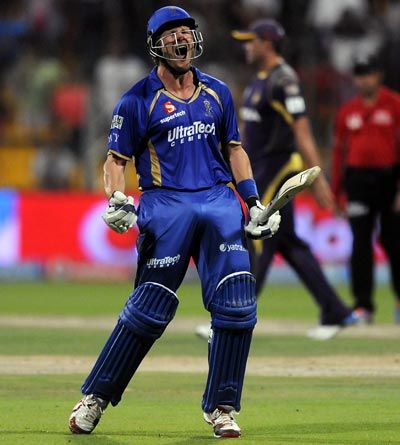 Rajasthan Royals held their nerve under extreme pressure to beat Kolkata Knight Riders via the Super Over in a fifth round match in the Indian Premier League match, in Abu Dhabi, on Tuesday night.

It is the first match in the tournament that went to the wire after both the innings and the Super Over scores were tied.

Rajasthan Royals were adjudged winners on boundary countback, as they scored 18 fours and a six across the their 20-over innings compared to Kolkata’s nine fours and three sixes.

In the Super Over, KKR, batting first, scored 11 off James Faulkner, with Manish Pandey hitting a six.

In reply, Steve Smith showed his cricketing acumen with a soft tap off the last delivery from Sunil Narine towards extra-cover to get two runs that sealed the match for the Royals.

- PHOTOS from the match

Earlier, having set KKR a target of 153 in 20 overs, the Royals bowlers kept their calm at the death and restricted Gautam Gambhir's men to 152 for eight in their 20 overs.

It was easily the most exciting contest of the UAE leg, with KKR needing 12 runs off the last over bowled by Kane Richardson. With three to get off the final delivery, Shakib al-Hasan (29 not out) could manage only two runs and the scores were tied at 152.

This was after a splendid penultimate over bowled by ‘birthday boy' Faulkner (3-11 in two overs) in which he got the wickets of Suryakumar Yadav (31), Robin Uthappa (0) and R Vinay Kumar (0) when they needed 16 off the last two.

Suryakumar swept Watson for a six to signal his intent of chasing down the target and it was followed with a heave that went for boundary through third man region as he got equation down to 28 from three overs.

Shakib then struck successive boundaries off Kane Richardson as KKR inched towards the target.

Surya's cameo of 31 from 19 balls ended as he was comfortably pouched by Smith off Faulkner.

Faulkner then bowled Robin Uthappa, who was shuffling across the crease to expose his leg-stump and got Vinay Kumar (0) off the very next ball as four runs came off the 19th over.

After a hat-trick of ducks and 1 from the four previous games, Gautam Gambhir (45) looked determined to make it count as he scored 45 off 44 balls with four boundaries. It wasn't a fluent innings but considering his form and confidence, one couldn't fault his effort. He did play considerable number of dot balls but showed his intent to stay at the crease come what may.

Gambhir showed a lot of resolve as he got his first boundary of this edition by cutting Richardson between point and cover. When Faulkner dropped one short, Gambhir rocked back to pull it for a one bounce four.

Manvinder Bisla (3), playing his first match, was searching for the swinging deliveries. His ordeal ended when Richardson got one to cut back and the batsman played hard at it only to offer a catch to Karun Nair at first slip.

Jacques Kallis got a reprieve on 1 when he was caught behind off Shane Watson but it was adjudged a no-ball as the bowler was found overstepping.

However, Kallis, in his bid to prop the scoring rate, was holed out in the deep off leggie Pravin Tambe, with Steve Smith taking a well judged running catch.

Manish Pandey (19) had a nice little partnership with Gambhir but couldn't capitalise. After hitting Tambe for a six and boundary, he was done in by a flipper as he was struck on the pads rooted to his crease.

Gambhir was finally out for 45 when he tried to slog sweep Rajat Bhatia out of the park but only managed to find the fielder at mid-wicket boundary.

Earlier, Ajinkya Rahane hit a classy 72 as Rajasthan Royals posted a fighting 152 for five on a dry pitch at the Sheikh Zayed Stadium.

His innings had six boundaries and a six. The manner in which he paced the innings was praiseworthy. When Watson and before that Samson were going after the bowlers, he

dropped anchor getting those singles along with odd boundaries as Royals reached 150 because of the Mumbai man.

the most successful bowler for KKR.

Karun Nair's (1) struggle in the Twenty20 format continued. He tried to give his state captain Vinay the charge and saw the delivery cut back and clip the leg-stump bail.

Sanju Samson (20) got four boundaries off Morkel in the final Powerplay over but suffered a freak dismissal.

The talented Kerala youngster got on the backfoot as Shakib al-Hassan bowled a fuller delivery. The ball hit his pads and deflected onto the stumps.

Rahane hit a few crisp boundaries and also got one when a thick edge off a rising delivery from Morkel flew over the slip cordon.

When Chawla was introduced into the attack, he played a copybook sweep-shot to get a boundary when the bowler pitched one well outside the leg-stump.

The first 10 overs produced 62 runs for the loss of two wickets.

Skipper Watson's first big hit was a lofted one bounce four off a flighted delivery from Shakib.

Rahane followed his skipper as he also used his feet to perfection to play the inside-out lofted shot over extra-cover for a boundary.

The watershed moment for Royals came in the 14th over before the second strategic time-out as Watson got three boundaries off Chawla. The over yielded 17 runs.

The first was a slog-sweep while the second was a cover drive and the third a lucky escape as the inside edge went for a boundary.

In the next over from Narine, Watson smashed him over extra cover for a boundary. Rahane, meanwhile, completed his second 50 in Season Seven off 44 balls.

While Rahane anchored the innings with proper cricketing shots, Watson hit a few lusty blows to score 33 off 24 balls as 64 runs in 7.3 overs were scored for the third wicket.

Rahane's innings had six boundaries and a six. The manner in which he paced the innings was praiseworthy. When Watson, and before that Samson, were going after the bowlers, he dropped anchor collecting singles and the boundary. Once he got to fifty, he opened up and pulled Vinay Kumar for a six.