Kings XI Punjab once again showed their batting might as the table-toppers chased down another 200-plus run target to comfortably beat Sunrisers Hyderabad by six wickets in an IPL match in Uppal on Wednesday. 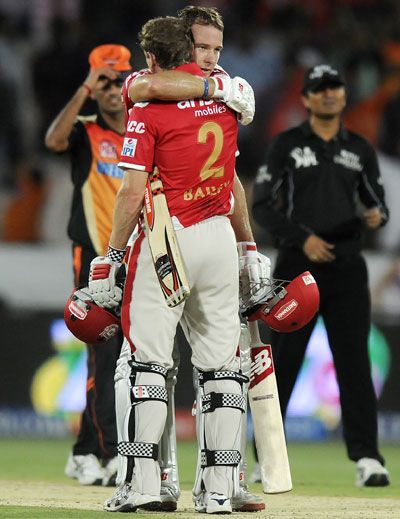 Chasing 206 for victory, the Punjab top-order pulled off another run feast -- their second 200-pus run chase in this IPL -- to canter to their target in 18.4 overs at the Rajiv Gandhi International Stadium.

Punjab batsmen struck from the word go, even after losing Virender Sehwag (4) on the second ball of the innings. Wriddhiman Saha (54 off 26 balls) and Manan Vohra (47) managed a 91-run second-wicket partnership to provide a solid platform for the big chase.

Saha led the assault with the duo getting 20 runs from the sixth over and taking their side to 86 after the powerplays.

Saha though ran out of steam when Karn Sharma got him stumped but the leg-spinner's joy was short-lived as Glenn Maxwell came to the crease. The current orange-cap holder belted Karn for three sixes to continue with the momentum.

Vohra was unlucky to to be run out while backing off at the non-striker's end but Maxwell got a lucky reprieve when he survived a catch with Amit Mishra bowling a no ball. In blistering form, Maxwell continued to hit fours and sixes as Punjab reached 150 in double quick time -- 156-3 in 12 overs.

Mishra finally got his revenge when Maxwell (43 off 22 balls) tried to come down the crease and hit the leggie over long-off only to find Dale Steyn's safe pair of hands.

George Bailey also got a lucky escape when David Warner's stunning catch was not called legitimate by the third umpire. Punjab skipper probably wanted that bit of luck as the Aussie hit two sixes and two fours in the final Dale Steyn over to make the mountain climb look easy.

Punjab finally won the game with eight balls to spare with Bailey fittingly hitting the winning six off Bhuvneshwar Kumar. Bailey (35 not out) and Miller 24 (not out) managed an unbeaten 52-run stand to disappoint the home crowd.

Earlier wicketkeeper-batsman Naman Ojha bludgeoned his way to an unbeaten 36-ball 79 as Hyderabad posted 205 for five in 20 overs.

Put into bat on a sunny afternoon, openers Shikhar Dhawan and Aaron Finch started on a cautious note but soon gained momentum at the end of the powerplays.

After a slow but steady start, Dhawan let it rip against Sandeep Sharma in the fifth over, hitting the medium-pacer for 26 runs with four fours and a six. The left-handed batsman started with a boundary off a no ball and then continued with the straight hits for three more
boundaries while the six got stuck towards the mid-wicket region as a hapless Sandeep could do little about the blitz.

Sandeep was taken off the attack as Punjab skipper George Bailey juggled with his bowling options to check the run-flow. Off-spinner Shivam Sharma provided the first breakthrough by cleaning up Finch for 20, which ended a 65-run opening stand.

The Aussie opener tried to cut a flattish round-the-wicket delivery from the Delhi youngster that rattled his middle stump.

While new man Naman found form, walloping Shivam for a six over long-on, Shikhar (45) was denied his fifty by Rishi Dhawan. The southpaw got a sliding delivery on the leg-side, which he tried whip off his hips only to gift a catch to Shivam at short-fine leg.

Joined in by David Warner, wicketkeeper-batsman Naman continued to increase his boundary count by hitting sixes and fours in every over. The hard-hitting Warner soon overtook Naman's strike-rate -- with fours and sixes galore -- as the duo stitched 81-runs for the third wicket.

Warner was run out after a quickfire 44 post a mix-up, but Naman continued in the same vein to post his fifty with a four.

A spate of wickets in the end also failed to stop Naman from piling the agony against Punjab In the end though Hyderabad lost their sixth game and are placed fifth in the table. 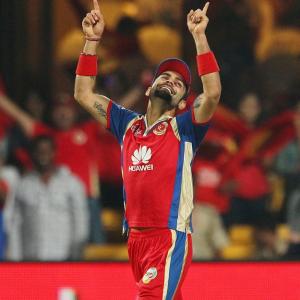 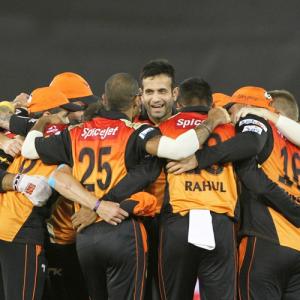