Kolkata Knight Riders took a giant stride towards ensuring a play-off berth as they walloped Chennai Super Kings by eight wickets to take their winning streak to five matches in the seventh edition of IPL.

Robin Uthappa got his seventh successive 40 plus score in the championship as his 40-ball-67 enabled the home team to chase down a tricky target of 156 with ease as it turned out to be a worthwhile wait for the supporters present at the Eden Gardens.

After Uthappa laid the foundation, Shakib Al Hasan gave finishing touches in a 21-ball 46 not out (6x4, 2x6) in an unbeaten 34 run stand with Manish Pandey (18 no) as KKR eased to the win with 12 balls to spare.

KKR with 14 points steered four points clear of RCB and Sunrisers as they would now require two more points to seal their play-off berth from the two remaining home games.

Uthappa had his share of luck as he was let off twice -- on six and and 24 -- something that cost dear for the two-time former champions who had piled 154/5 with Suresh Raina hitting a 51-ball 65.

First it was burly Ravichandran Aswhin who put down a sitter at the slip in the very second ball as Dhoni brought on Raina and the result was no different, though a difficult one.

Uthappa never looked back as he continued his dream run and middled the ball well hitting 10 boundaries and one six in a 64-run opening wicket partnership with Gautam Gambhir. 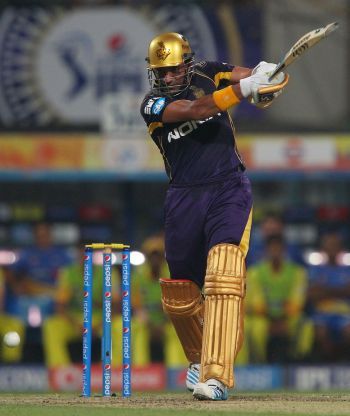 In their last seven outings, Gambhir and Uthappa had two century partnerships and three 50 stands together as the opening stand once again punctured CSK's hopes of a comeback.

The KKR skipper cleverly rotated the strike and played a perfect ally as the duo put on 52 runs in the Powerplay before Ishwar Pandey gave the breakthrough.

Earlier, Raina's second half-century in as many innings propelled Chennai Super Kings to a fighting 154 for five.

Put into bat, CSK were crawling at 60/2 in 10.3 overs after IPL debutant Pat Cummins and wily Sunil Narine took the prized scalps of Dwayne Smith (5) and Brendon McCullum (28) respectively.

The boundaries dried up initially as KKR bowled tidily with Umesh Yadav and Shakib al Hasan too keeping the batsman quiet in the Powerplay that yielded just 35 on a helpful Eden Gardens wicket which had a greenish look to it.

Raina, who scored an unbeaten 62 against RCB in the last match, timed his innings beautifully as he started watchfully with McCullum at the other end.

Once the explosive Kiwi opener got out to a top edge against Narine, Raina slowly cut loose during an entertaining partnership with Du Plessis.

Making his debut in the IPL, New South Wales pacer Cummins had a maiden-wicket first over after he castled inform CSK opener Dwayne Smith (5) in his second ball to give KKR an inspiring start.

The 21-year-old got perfect help from the grassy patches to bowl beauty which moved a shade away after pitching as the big-hitting West Indian batsman saw the off-stump being pegged back.

It was a rare failure for the CSK opening dup but McCullum made his intentions clear against his former side by smashing the Aussie youngster two sixes and one boundary in his next over to bring the run-rate back on track.

Gambhir brought his trump card Narine and Raina welcomed his with a six over long-on as the KKR skipper was forced had to remove the spinner out of the attack resorting to Yadav and Shakib.

The pace-spin combination did not yield any wicket but they went about their job quietly with only 35 runs in the Powerplay and 59 after 10 overs, with Yadav giving away 17 and Shakib 16 from three overs each. 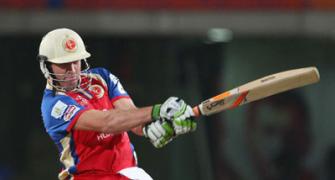 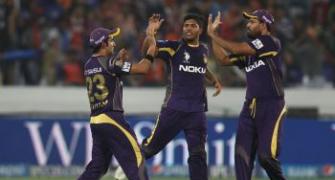 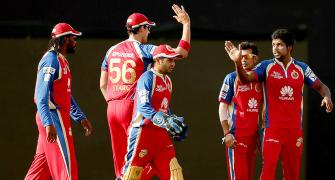 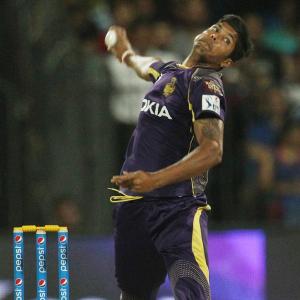 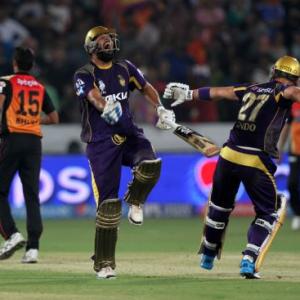