Riding on the disciplined performances of their bowlers, Royal Challengers Bangalore thrashed Mumbai Indians by seven wickets for their second straight victory, in the Indian Premier League, at the Dubai International Stadium, in Dubai, on Saturday.

Put in to bat, Mumbai Indians posted a paltry 115 for nine in their 20 overs before Bangalore overcame a shaky start to canter home in 17.3 overs for a comprehensive seven-wicket victory. 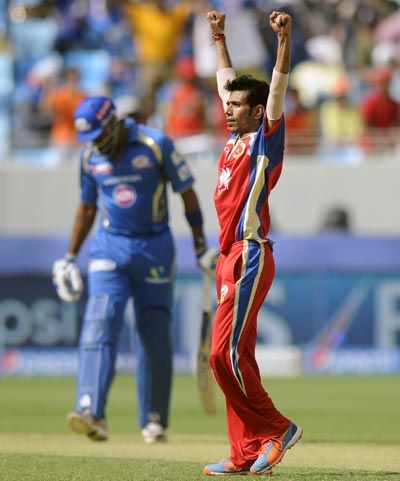 RCB had a shaky start when left-handed opener Nic Maddinson was bowled by a quick yorker from pacer Lasith Malinga for 16 and Zaheer Khan wreaked havoc in the very next over with two wickets.

The veteran left-arm pacer had the in-form Virat Kohli caught at first slip for a duck before he trapped Yuvraj Singh leg before wicket in the space of three deliveries.

Wicketkeeper Aditya Tare though ruined Zaheer's hat-trick chance when he dropped Yuvraj on the very next ball after Kohli's dismissal but he failed to make most of the lifeline.

But Parthiv Patel and AB de Villiers thwarted Mumbai's hopes with a dogged 99-run unbeaten partnership for the fourth wicket to carry their team to victory.

Parthiv mixed the right dose of caution and aggression to score an unbeaten 57 off 45 deliveries. His innings was laced with seven boundaries.

At the other end, De Villiers kept the scoreboard moving at a good rate, scoring an unbeaten 48-ball 45 with the help of three fours and two sixes.

Earlier, Mumbai Indians got off to a poor start with both Mike Hussey and Aditya Tare again struggling in the initial overs against the new ball.

South African pacer Albie Morkel drew first blood after scalping Mike Hussey for 16 in the fourth over of the innings, who was caught at square leg as he mistimed a pull shot.

Tare also couldn't last long as pacer Varun Aaron induced a top-edge from the batsman which landed in the safe hands of Maddinson in the deep.

Leg-spinner Yuzvendra Chahal then bowled a magnificent spell to bag two big wickets that of Rohit Sharma and Kieron Pollard to finish with splendid figures of two for 17 runs in four overs.

Both Rohit and Pollard tried to take on the young leg spinner but were caught at long-off and long-on respectively.

Ambati Rayudu and Corey Anderson also struggled to get the innings back on track before Mitchell Starc sent the two batsmen back, in the 17th over.

Rayudu was caught at long off for a steady innings of 35 from 37 balls, while Anderson holed out to long-off as Starc finished with two for 21 in four overs.

Pacer Ashok Dinda joined the party when he packed Zaheer back for a duck, while Harbhajan Singh was bowled by Varun Aaron for eight.

This was RCB's second successive win in the tournament following their eight-wicket win against Delhi Daredevils in Sharjah. On the other hand, defending champions Mumbai need to pull up their socks after their second successive loss. 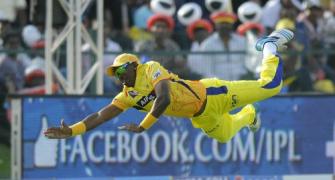 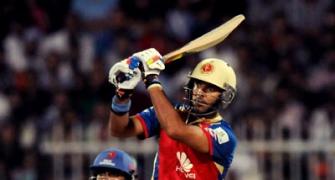 Yuvraj silences his critics... at least for some time! 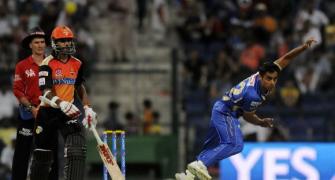 Bhatia thanks mentor Dravid for encouragement 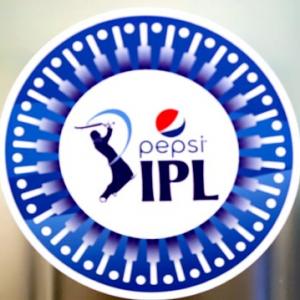 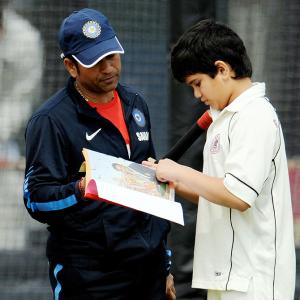