# Manoj Tiwary (46 off 51 balls) has registered his highest innings in the fourth edition of the IPL. His average of 66.50 (133 in four innings) is the best for Kolkata in the present tournament.

# Mahela Jayawardene has received his fifth man of the match award in the IPL.

# Jayawardene is the sixth player to have received five or more man of the match awards in the IPL, joining Yusuf Pathan (9), Sachin Tendulkar (7), Jacques Kallis (6), Mahendra Singh Dhoni and Shaun Marsh.

# Kolkata (126 for nine) have recorded their lowest total while batting for 20 overs in the present edition of the IPL.

# Kochi Tuskers Kerala have recorded their third consecutive victory in the IPL. They had lost the first two games and then beat Mumbai, Chennai and Kolkata.

# Kolkata's six-run loss is their third smallest by runs' margin in the IPL. Chennai Super Kings had defeated them by two runs at Chennai on April 8, 2011 and by 3 runs at Kolkata on May 18, 2008.

# Shakib (3/28) has bowled brilliantly to produce his best figures in the IPL.

# In only three IPL matches played till date, Shakib has bagged seven wickets at an average of 11.42.

# Ravindra Jadeja has registered three sixes during his innings of 29 off 18 balls. His tally of 11 sixes is the most in the present competition.

# Jadeja has bagged four wickets at an average of 31.00 in five matches - the most for Kochi Tuskers Kerala in the IPL 4. 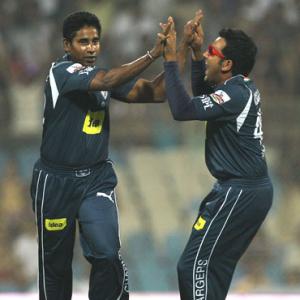 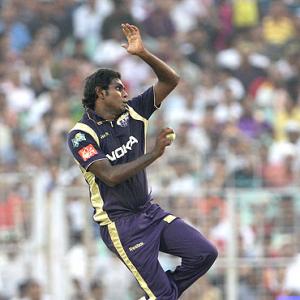