Gayle, who remained unsold in the IPL 4 auctions earlier this year and came in the RCB team only as a replacement for injured pacer Dirk Nannes, made his return in grand fashion silencing his former team Kolkata Knight Riders with a thunderous ton.

In a spot of bother with one win, three consecutive losses and an abandoned match, the left-hander provided the much needed impetus to the Bangalore outfit, inspiring the team to a comprehensive nine-wicket win over the Knight Riders on Friday. 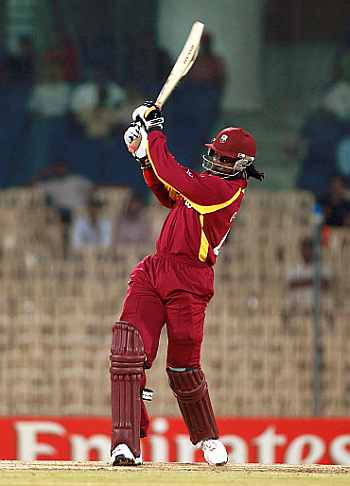 Chasing a challenging 171 for five against Knight Riders, Gayle struck a whirlwind unbeaten 102 that came off just 55 balls to bring RCB back on the winning track.

And come Tuesday, the West Indian opener would be eyeing a repeat at a transformed Kotla pitch, which from a low, slow wicket has suddenly turned into a belter and witnessed a run riot in the last match it hosted between Daredevils and Kings XI Punjab.

In the points table too, RCB finds itself in a better position than Daredevils. With five points from six matches, the Daniel Vettori-led side is presently occupying the sixth position while Delhi is languishing at the second last spot with four points from five games.

With the likes of Gayle, Tillakaratne Dilshan, AB de Villiers, Virat Kohli and Saurabh Tiwary in its rank, the RCB has got a power-packed batting line up, which can raise alarm bells in any opposition camp.

Gayle's century aside, Dilshan (38 off 31) played a useful knock against Knight Riders but what he needs is consistency. De Villiers and Kohli are also in good form and if Tiwary can rediscover his touch, RCB would undoubtedly become the most formidable batting unit in this tournament.     However, with pace spearhead Zaheer Khan looking out of sorts, RCB's bowling continues to remain the team's weakest link. In the last two matches, astonishingly, Zaheer conceded more than 50 runs and has not yet shown his World Cup form so far. The loss of Nannes too has hurt the Bangalore outfit badly.

On the other hand, Delhi's campaign so far in this tournament has been far from impressive.

Despite winning their last match by 29 runs against Kings XI, Delhi still find themselves at the bottom of the points table and they need to conjure some wins quickly to climb up the ladder.

Unlike RCB, Delhi are considerably weak on paper and it's high time, their players struck form for any chance of progressing into the next stage of the event.

Virender Sehwag and David Warner's breezy start up the order against Kings XI is a welcome sign for Delhi, who are searching for inspiration in the absence of too many big names in the batting order.

Both Sehwag (77 off 35) and Warner (77 off 48) made identical 77 to raise a 141-run opening stand against Kings XI to propel Delhi to a mammoth 231 against Kings XI and the duo would be hoping for a similar performance against RCB on Tuesday to help their side's cause.

Apart from Sehwag and Warner, there aren't too many big names in Delhi's batting line up. Y Venugopal Rao has been consistent run getter in the middle order for the team in this tournament but the likes of Aaron Finch, Yogesh Nagar, Naman Ojha, Irfan Pathan need to rise to the occasion soon.

Like RCB, Delhi's bowling line up too looks shaky with South African Morne Morkel waging a lone battle so far but unfortunately he is not being able to get the team breakthroughs because of lack of support from the other end.

Veteran Ajit Agarkar's two wickets at the cost of 47 runs against Kings XI were courtesy lady luck. Pathan has been economical but he is unable to pick up wickets.

Left-arm spinner Shahbaz Nadeem, on the other hand, has impressed in the limited outings he has got with his stand out performances coming against Pune (1/24) and Deccan Chargers (2/39). He is likely to return to the playing eleven on Tuesday after missing out in the last game against Kings XI.