After defending their Indian Premier League crown Chennai Super Kings is being compared with one of the best teams in modern sport. Bikash Mohapatra analyses the analogy.

Comparisons are fluke. But they are inevitable nonetheless.

The case of Chennai Super Kings is no different.

After defending their Indian Premier League crown, beating Royal Challengers Bangalore by 58 runs at Chepauk in the final, they are being compared with one of the best teams in modern sport. There are many who opine that the team from Chennai can be to Indian cricket what Manchester United is to English club football.

R Ashwin, who played an important role in scripting Chennai's success, has ensured an analogy between the two will be made for some time to come. Talking to a news channel, the spinner said Chennai is definitely capable of replicating Man United's success story.

Since we Indians love to compare, almost everything (with or without a valid reason), let's first congratulate ourselves for getting a new topic to do so.  I am going to start doing the same in the next few paragraphs.

For die-hard fans of the Red Devils, the above comparison might seem a bit far-fetched, considering the IPL is still a fledgling tournament vis-à-vis the EPL. But before you jump the gun, let me clarify that this comparison charts a predictable path.

For starters, the Indian Premier League is an off-shoot the English Premier League (EPL). The whole concept of a lucrative franchisee-level cricket competition was derived, rather inspired, if am allowed to use a word from any Bollywood filmmakers' book, from the hugely successful English club competition.

If Manchester United is the best club since the inception of the Premier League in 1992-93, winning 12 of the 19 editions held so far, then the Super Kings have also been the best franchisee since the first edition of the IPL in 2008.

MS Dhoni's team has won two of the four editions, been beaten finalist in the inaugural season and a semi-finalist in 2009.

If consistency is taken as the lone parameter, one has to admit that the comparison is at least on the right track. Besides, there are a few other similarities as well.

Man United has, over the years, managed to retain the crux of the team season-after-season. The likes of Ryan Giggs, Paul Scholes and Wes Brown have been important players at Old Trafford for ages now.

CSK is following suit in this respect. In the second player auction that preceded the tournament's fourth edition, Chennai retained key players like captain Dhoni, Suresh Raina and Albie Morkel while spending a few dollars to re-acquire the likes of Mike Hussey, Murali Vijay and Doug Bollinger, to name a few.

So, while teams like Bangalore or Kolkata Knight Riders went for a complete overhaul in their pursuit of success, Chennai kept faith in its trusted lieutenants. Need we say the owner's faith was justified?

Same is the case as regards the coach. Man United kept faith in Sir Alex Ferguson -- who took over from Ron Atkinson in 1986 -- even if he won next to nothing in his first six years at the club.

Now, after 25 years in charge at Old Trafford, Fergie is arguably the most successful coach in the history of club football.

Stephen Fleming's first year in charge at Chennai was a disappointment -- a semi-final loss in 2009 was a come down on the final showing of the previous years. However, the owners stuck to him and he has delivered twice in succession.

Let me clarify here that I am not comparing Fleming with Fergie for the simple reason that they can't be compared. My point is regarding persisting with a coach to get the desired results.

The fact that the New Zealander has been given an extension proves the Chennai owners are looking at the right direction.

Next up is the propensity of both the teams to make the home advantage count. At the club level, winning 'home' games are imperative to keep alive the title hopes.

Coming to Man United first, suffice to say they were pedestrian on the road, winning just five times in 19 matches (with four defeats and 10 draws).

However, in their own bastion, the Old Trafford, the Red Devils remained unconquered, winning on 18 occasions (and drawing once). Needless to say their home form helped them considerably towards winning that record title.

The story of the Super Kings is no different. They remained undefeated in seven league games at the MA Chidamabram stadium (Chepauk) and the fact that the final was played on the same venue, tilted the balance considerably in their favour.

Dhoni's men weren't half as impressive on the road, winning just thrice in eight attempts.

Lastly, our two candidates also match-up on the controversy quotient.

How many times have you seen a rival manager accusing referees and match officials of favouring Fergie's team in key Premier League fixtures? There must have been many occasions when you would have felt that Man United are getting an undue advantage -- be it regarding cards, penalties or, for that matter, the added minutes.

This something that can be best described as the Champions' Theory, according to which any team which performs consistently becomes so powerful over a period of time that it receives little favour from the officials, or, for that matter, can influence their decisions to an extent.

The Super Kings have gone a step of Man United in this aspect. If you recollect the happenings of the last two months or so, you might just get a clearer picture.

Many franchisee owners cried fowl when Chennai managed to retain most of its key players. Their appeals palpably fell on deaf ears.

Again, during the Super Kings' vital away match against Rajasthan Royals, Shane Warne, the Rajasthan skipper, wasn't happy about the wicket prepared and felt it nullified their home advantage. He didn't hesitate in being vocal about his opinion.

The result: the Super Kings breached the Rajasthani bastion, Warne faced an enquiry and was subsequently slapped a fine of US $50, 000 for his outburst.

For that matter many also felt that Chennai being the venue for the final was akin to a script that was penned to ensure surefire success.

That probably sums it up.

I would reiterate here comparing the Super Kings with Man United at this stage is perhaps a tad premature.

But, as I said at the outset, we Indians love to compare. I have just finished doing what you readers will do in the next few years! 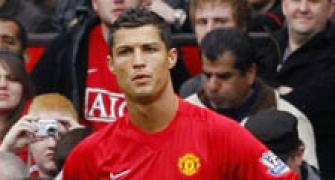 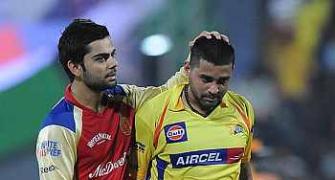 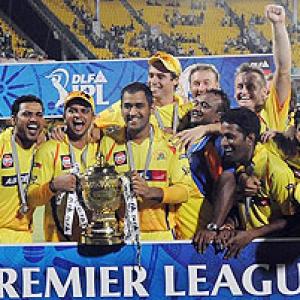