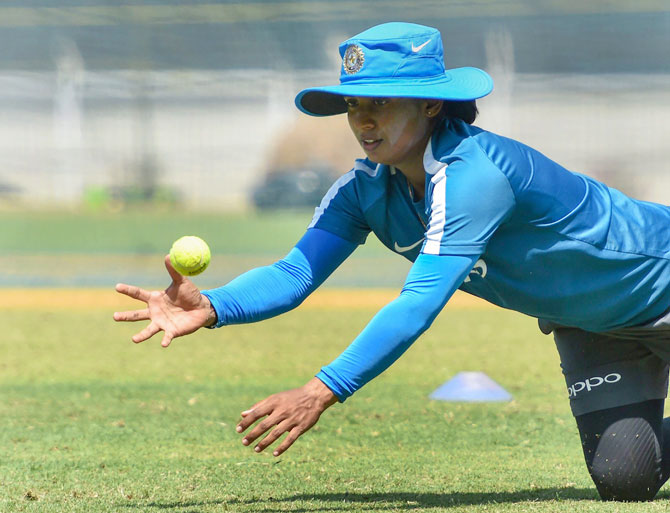 IMAGE: India's Mithali Raj at a practice session at the CCI Brabourne Stadium in Mumbai on Wednesday, the eve of the 1st T20 against Australia. Photograph: Mitesh Bhuvad/PTI

Hosts India may not have the experience but they won't be lacking in intensity during the Twenty20 tri-series against England and Australia starting in Mumbai on Thursday, said women's T20 skipper Harmanpreet Kaur.

England and Australia have players, who compete in the Women's Big Bash League and Harmanpreet describes the two sides as good.

"No doubt they (England and Australia players) have lot of experience, because they have played T20 format. We know we are not as powerful in our strength as compared to the foreign players. We are working on it daily," Harmanpreet said.

"Right now, for us as a team it is a learning process and preparing for the World Cup and day by day we are taking the challenges. We know both the teams (Australia and England) are good in T20 and we will like to give them a fight," she added.

India were whitewashed by Australia in the three-match ODI series at Vadodara and Harmanpreet said it was fielding that let them down.

"In the T20 format, there are lot of areas where we need to improve and a big thing where we are lacking is our fielding, because if you see the ODI series, (because of) fielding we have given a lot of runs," Harmanpreet told reporters.

"In the T20 format, it is a short format, we will give our 100 per cent and girls are looking confident and we will do better."

India had thrashed South Africa 3-1 in the five match T20 rubber held in the Rainbow nation and Harmanpreet said the girls were positive in their approach and hoped that the team would do well.

"When we played T20 in South Africa, everybody enjoyed it because we were playing the format after 14-16 months. And this is the second series and everyone is positive. I know that we did not do well in ODIs, but despite that everyone's approach is good and we will do better in this tournament," she said. 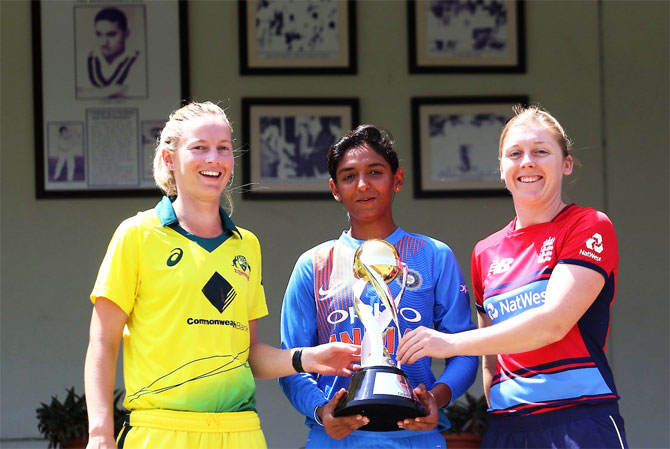 IMAGE: India captain Harmanpreet Kaur is flanked by Australia captain Meg Lanning and England captain Heather Knight as they pose for a photo with the winners trophy ahead of the Womens T20I Tri-series at Brabourne stadium in Mumbai on Wednesday. Photograph: BCCI Women/Twitter

Harmanpreet's Australian counterpart Meg Lanning refused to underestimate the hosts in the Twenty20 tri-series, saying all sides are even in the shortest format.

"India are a very good team in this format, and so are England. So we know that we've got to play really well," Lanning said on the eve of clash against India.

"We've definitely got some confidence in our group from the way we've played (in the ODIs). But we do understand that it's a different format and it's very close in T20 internationals," she added.

"Even in the ODI series, they (India) were putting us under the pump. So it's a very even series. Very difficult to say that one team is ahead of the other two, which is great. By the looks of the wicket and the outfield out there, there are going to be plenty of runs out there," Lanning said.

The skipper also said that the series was an important one leading up to the Women's T20 World Cup.

"It's a massive series for us, coming up against two massive teams, in these conditions as well. We know we don't have a lot of cricket between now and the world cup. So we're really keen to make sure we play very well in this series. And as a bunch, we are going to be tested," she said.

"Rodrigues whacked us around a little bit and made us nervous. Pooja is a very good bowler and has scored a lot of runs as well. It's exciting for the game to see young Indians coming through. They are someone to keep an eye on," said 25-year-old Lanning.

Meanwhile, in a bid to promote women's cricket, the BCCI has announced that the entry for spectators is free for the matches to be held at Cricket Club of India's Brabourne Stadium. 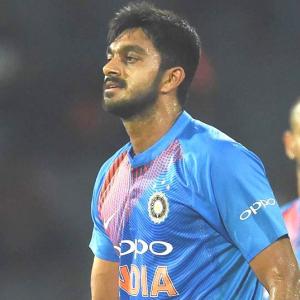 Vijay Shankar hopes to forget his 'disheartening' off day