A brilliant 125-run partnership between James Taylor and Jos Buttler helped England beat India by three wickets at the WACA on Friday and enter the tri-series final, where they will meet Australia.

The former scored only four boundaries in his 122-ball knock but played the role of a sheet-anchor to perfection, while Buttler had seven fours off 77 balls.

Stuart Binny was the pick of the Indian bowlers with figures of 3 for 33, while Mohit Sharma bagged two wickets for 36 runs.

Earlier, India, put in to bat in a must-win match, failed to capitalise on a good start, but thanks to top-scorer Rahane’s 73 they were able to get to 200.

Out-of-form Shikhar Dhawan (38) and Rahane got off to a slow start but batted to a plan, rotating the strike to good effect. Slowly the runs started coming, albeit in a tickle, as the first 10 overs yielded only 34.

Rahane displayed good tough as the openers brought up their 50-run stand in the 14th over. Even Dhawan played some good shots after spending time at the crease, cutting and driving with more ease.

But he edged one to Jos Buttler behind the stumps off Woakes in the 21st over with the score reading 83.

Rahane got to his eighth ODI fifty in the 25th over and though he tried to play some expansive strokes, did well to hold one end up.

England tightened up their bowling and came up with some good fielding which paid dividends.

Virat Kohli (8), who came in to bat at number three, was the next to depart. He attempted a big shot off Moeen Ali only for Joe Root to take a good running catch at long-off.

Ali returned for his next over and got rid of Suresh Raina (1), who played a horrendous stroke. The left-hander danced down the track, but going for a big shot was caught at backward point.

Ambati Rayudu (12) added 27 runs for the fourth wicket with Rahane but ever looked settled at the crease. He was out just before the batting powerplay was due, in the 35th over, caught behind off Broad.

The big blow came when Rahane was dismissed in the very first powerplay over, trying to work Finn down to third man, but ended up caught behind.

India also lost Binny (7) in the powerplay's final over, caught brilliantly at first slip by a diving Ian Bell off Steven Finn again.

Those five overs yielded only 23 runs.

Skipper Mahendra Singh Dhoni (17) tried to stay at the wicket for the final 10 overs but he was finally out LBW to James Anderson (1-24) in the 43rd over.

Ravindra Jadeja (5) played a rash stroke while Axar Patel (1) is still yet to come to terms with conditions in Australia as far as his batting is concerned.

India only managed to cross the 150-mark in the 39th over and were struggling at 165/9 before a 35-run partnership for the final wicket between Mohammad Shami (25) and Mohit Sharma (7) helped gain a little respectability to the total.

Shami threw his bat around and was the last to be dismissed in the 49th over, caught behind off a slower delivery by Woakes. 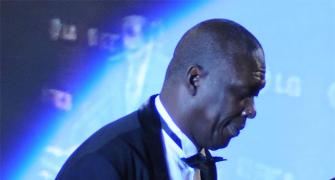 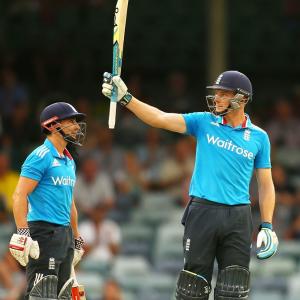