Images from the sixth ODI of the tri-series, between India and England, at the WACA, on Friday Jos Buttler of England celebrates his half century with James Taylor during their ODI match against India at WACA on Friday. Photograph: Paul Kane/Getty Images

James Taylor revived England's wobbly chase to lead them to a three-wicket victory over India on Friday which secured a place in the tri-series final against Australia.

Taylor (82) added 125 runs with Josh Buttler (67) for the sixth wicket to help England overcome a top-order collapse and chase down a 201-run victory target with 19 balls to spare. England lost both openers early and looked in trouble as their first 66 runs cost them the top half of their batting order.

Taylor, beneficiary of a missed run-out chance, and Buttler, dropped by Raina in the slips on 21, arrested the slide and put the chase back on track with sensible batting. Taylor and Buttler fell in quick succession to inject excitement to the contest but England's victory never looked in any real doubt. Ajinkya Rahane of India raises his bat to celebrate his half century. Photograph: Paul Kane/Getty Images

India's uninspiring batting show continued as they threw away a decent start and were all out for a meagre 200.

Ajinkya Rahane (73) was the top-scorer of the innings as no other batsman crossed the 40-run mark.

England's pace battery initiated a batting collapse after India were placed comfortably at 83 for one.

Rahane got to his eighth ODI fifty in the 25th over though he tried to play some expansive strokes. Steve Finn took three wickets for 36 runs, while Chris Woakes had figures of 2 for 47, Stuart Broad 2 for 56 and spinner Moeen Ali 2 for 35 after India were put in to bat. The wicket was not easy to bat on, as was evident in the 43rd over when James Anderson hit skipper Mahendra Singh Dhoni (17) flush on the helmet and, five balls later, struck the India captain below the knee-roll almost from same area to trap him lbw.

India could only cross the 150-mark in the 39th over and were struggling at 165 for 9 before a 35-run partnership for the final wicket, between Mohammad Shami (25) and Mohit Sharma (7), helped give respectability to the total. Ian Bell of England runs on to the field at the start of the match. Photograph: Gareth Copley/Getty Images

It was, however, their disciplined bowlers who had laid the victory platform, shooting out India for 200 in 48.1 overs in what was effectively a semi-final at the WACA. 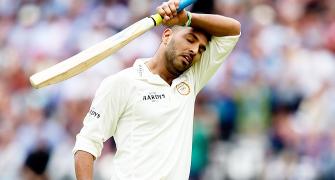 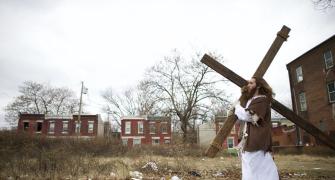 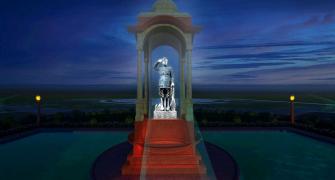 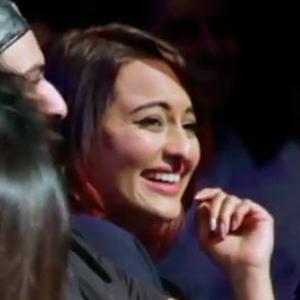