Statistical highlights of the fifth and final ODI between India and South Africa at Centurion.

# Munaf Patel has bagged eleven wickets at an average of 18.72 in five matches, establishing a record for India in a  bilateral series against South Africa.

# Zaheer Khan has bagged nine wickets at an average of 25.11 -- the second highest for India in a bilateral series against South Africa.

# Hashim Amla has recorded his first hundred against India -- his seventh in ODIs.

# Parthiv Patel (38) has registered his highest innings against South Africa.

# Last month, Patel had posted two fifties against New Zealand -- 56 not out at Chennai and 53 at Bangalore -- the only two fifties in his ODI career.

# Patel's excellent innings of 38 off 34 balls is his highest away from home, surpassing the 28 against Australia at Sydney on January 22, 2004.

# Yusuf Pathan's 68-ball hundred is the sixth fastest for India -- the fastest is a 60-ball hundred by Virender Sehwag against New Zealand at Hamilton on March 11, 2009.

# Pathan, for the first time in a bilateral series, has registered two fifty-plus -- 59 at Cape Town and 105 at Centurion.

# Pathan has recorded eight sixes in an innings -- the second best tally for India --  Mahendra Singh Dhoni had posted 10 sixes during his unbeaten 183 against Sri Lanka at Jaipur on October 31.

# Hashim Amla is the leading run-getter in the series -- 250 runs at an average of 62.50, including one hundred and two fifties.

# Amla's brilliant unbeaten 116 off 132  balls is his fourth century in South Africa.

# Amla has got his 8th Man of the Match award -- three times against West Indies and once each against Pakistan, Australia, India, Kenya and Bangladesh.

# Morne van Wyk (56 off 72 balls) has recorded his second fifty against India -- his third in ODIs.

# Pathan and Zaheer put on 100 -- India's highest for the ninth wicket against South Africa in ODIs.

# The aforesaid partnership is the highest by any pair for the ninth wicket against South Africa, eclipsing the 80  (unbroken) by UAE pair -- Arshad Laeeq and Shaukat Dukanwala at Rawalpindi on February 16, 1996.

# Zaheer's excellent 24 off 58 balls is his highest against South Africa in ODIs.  His highest in ODIs is 34 not out against New Zealand at Wellington on January 8, 2003.

# Morkel has got the Player of the series for the first time in ODIs for capturing 12 wickets at 11.41 runs apiece.

# Lonwabo Tsotsobe is the top wicket-taker in the series -- 13 at 13.53 runs apiece -- a record for South Africa
against India in a bilateral series. 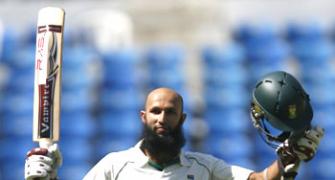 Amla: A hallmark of fortitude and resilience 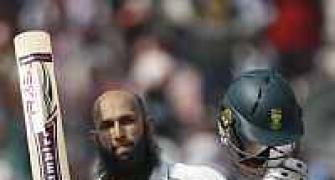 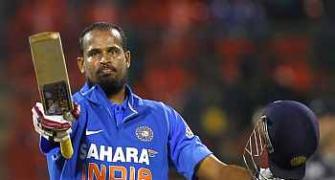