India recorded a highest tally of wins in a season

Here are the statistical analysis at the end of the four-match series between India and Australia. 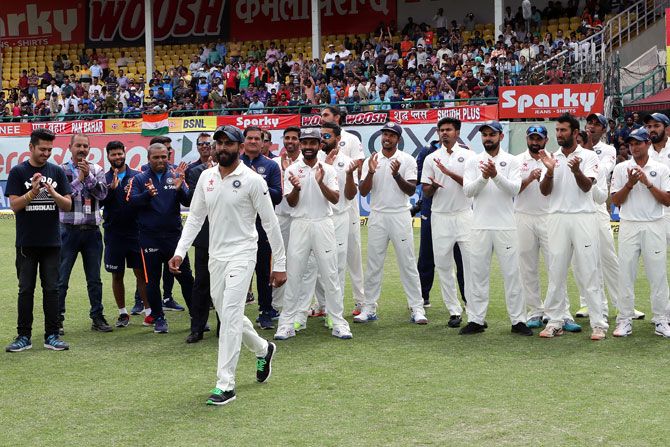 IMAGE: Ravindra Jadeja was named the man of the match and man of the series. Photograph: BCCI

# India became the third nation to win Test series against all their opponents at the same point of time. Australia had recorded the distinction in 2004-05 and 2006-07 and South Africa in 2012-13.

# With their victory in the Dharamsala Test by eight wickets, India have achieved a rare distinction of winning four consecutive Test series vs Australia in India since 2008.

# For the first time, India have won seven consecutive Test series -- from 2015 till date.

# Jadeja's second MOM award against Australia is his fifth in Tests. For the first time, Jadeja has been adjudged the Man of the series.

# Lokesh Rahul has posted five consecutive half centuries vs Australia in Tests. The sequence of scores being -- 90 & 51 at Bengaluru; 67 at Ranchi and 60 & 51 not out at Dharamsala.

# Besides his century in the Dharamsala Test, his only other century in a losing cause being 119 vs Sri Lanka at Colombo, SSC in 2016

# Ajinkya Rahane has batted quite aggressively while posting an unbeaten 38 off 27 balls at a strike rate of 140.74 -- his best ever in an innings.

# Rahane's impressive strike rate is only the second best by an Indian batsman in an innings of 35 or more in the fourth innings behind Sanjeev Sharma's outstanding 146.15 when making 38 off 26 balls vs England at Lord's in 1990

# The tally is the joint-second most by a team in a season in Tests. Australia's outstanding record of 11 wins out of the 12 played during the 2005-06 season (one drawn) is without parallel while in the 1999-00 season they had won all 10.