Statistical highlights of the second day's play in the first Test played between India and New Zealand in Hyderabad on Friday.

# Pujara's 159 is the fifth highest by India's number three batsman -- the highest is 223 by Polly Umrigar at Fateh Maidan, Hyderabad in November 1955. 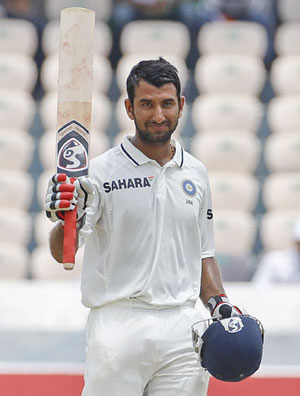 # Pujara's knock is the seventh highest first century by an Indian batsman in Tests.

# Jeetan Patel (4/100) has bowled quite well to take four wickets -- his best bowling figures against India.

# Dhoni has been maintaining an average of fifty-plus against New Zealand -- his tally being 372 runs in eight innings at an average of 53.14.

# Of the top five stands for the sixth wicket for India against New Zealand, Dhoni figures in three - one each with Dravid, Pujara and Tendulkar.

# India (438) have posted their second highest total at Rajiv Gandhi International Stadium, Uppal. In the 2010-11 Hyderabad Test, India had made 472 against New Zealand.

# Zaheer Khan's tally of five ducks is the most in India-New Zealand Tests.  With his 26th duck in Tests, he has extended his Indian record in Tests.