Compton shines as England-Mumbai 'A' game ends in draw

England emerged with a few positives, ahead of the opening Test of the four-game series against India, from their three-day warm-up game against Mumbai 'A' that ended in a draw at the D Y Patil stadium, in Mumbai, on Monday.

The visitors first shot out the home team for 286 to take a 59-run lead, with left-arm spin duo Monty Panesar and Samit Patel polishing off the lower order in style. Then, opener Nick Compton, who is vying for the opener's slot with 21-year-old Joe Root to accompany captain Alastair Cook in the first Test, regained some form in the second innings, scoring an unbeaten half century.

Compton, who flopped in the first two innings he played on the tour, scoring a duck (against India 'A' in the opener at the Brabourne stadium) and one (in the first innings against Mumbai 'A'), started nervously before helping himself to some runs.. 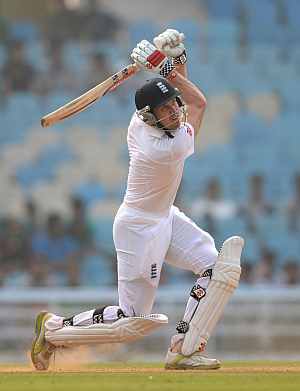 When stumps were drawn for the last time, Compton was unbeaten with 64 after a stay of 214 minutes, during which he faced 162 balls and hit 6 fours.

Ian Bell (28), who faced 42 balls and hit three fours in 58 minutes, was the unbeaten batsman at the other end.

The England pace bowlers did nothing extraordinary in the match barring bowling long spells, with James Anderson and Graham Onions procuring one and two wickets respectively.

Stand-in skipper Stuart Broad could not do that too because of a left heel injury that restricted him to bowl 10 overs, while Panesar showed he could trouble the Indian batsmen with some help from the track.

Patel was a big gainer and staked strong claims to grab a middle order slot with his knock of 60 and followed it up today by claiming three wickets in 16 balls as Mumbai 'A' slumped from overnight 232 for 4 to being all out in 93 minutes.

Coming on top of the 100 he made and the two wickets he claimed in the first game against India 'A', his all-round display here strengthened his claims for a Test spot.

Patel took three for 44 while Panesar finished with three for 64, which included the prized wicket of Cheteshwar Pujara, who was retained today by the national selectors in the squad for the opening two Tests.

England used the remaining time to get some valuable batting practice before the opening Test at Ahmedabad on November 15.

They will play a four-day practice game, their last, against Haryana in the textile city from November 8-11.

From the home side, Pujara struck timely form with an innings of 87 on Sunday and, more importantly, spent nearly four-and-a-half hours to have a good look at the England attack.

The Saurashtra batsman, who played in the game as an invited player along with Delhi opener Shikhar Dhawan, and Hiken Shah, who was out for 92 on Monday, showed exemplary patience when adding 163 runs for the third wicket on Sunday to frustrate the England bowlers.

This morning, England shot out the hosts, after the latter resumed at the overnight 232 for 4, in 93 minutes, to grab the first innings lead.

The hosts' lower order collapsed against Panesar and Patel after speedster Onions secured the first breakthrough. Onions sent back overnight batsman Shah before the left arm spinners ran through the remainder of the batting.

The last five wickets of the home team fell for the addition of only 22 runs and in the space of 6.3 overs after Shah fell at 240.

Panesar took two of the five wickets that were claimed by the spinners while Patel got the other three while conceding ten runs.

Shah, not out 84 on Sunday evening, when skipper Suryakumar Yadav fell in the last over with the score at 232, and new man Nikhil Patil Jr, commenced the innings on the final day against the new ball.

Left-handed Shah cut Onions when the bowler erred outside the off-stump for a couple of fours before edging him down the leg side to wicketkeeper Jonny Bairstow to depart in the sixth ball of the morning.

Panesar, England's best pick on Day 2, dismissed Patil to end the first hour of play in which 32 runs were added in 14.2 overs.

Patel was brought on for Anderson and he struck with his first ball to have Sufiyan Shaikh caught at short extra cover.

The home team lost two wickets for one run before Panesar dismissed Shardul Thakur for one to make it 270 for 8 even as Mumbai A lost three wickets for six runs in 20 balls.

Patel then sent back Kshemal Waingankar and last man Javed Khan in successive balls to end the innings and help England take the first innings lead.

Pacer Stuart Broad, captaining the side in the absence of the rested Alastair Cook, was present when England fielded in the morning after having gone for a scan of his bruised left heel at the D Y Patil hospital after the end of play last evening.

Broad, who bowled only 10 overs on Sunday, did not bowl at all on the final day.

Root got out when he offered no stroke to first change bowler Thakur after the visitors got their best start of the tour -- a stand of 38.

Compton nicked Waingankar through the slips for his first four after 33 balls before settling down to remain unconquered at the end.

One-down Jonathan Trott was out leg before to non-regular bowler Yadav.

Yadav would have also claimed the wicket of Ian Bell off the next ball but Thakur dropped a sharp chance at backward short leg.

Image: Nick Compton bats during Day 3 of the tour match between Mumbai 'A' and England at the D.Y. Palit stadium 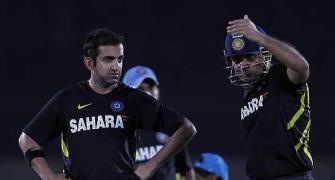 England will have it tough against India 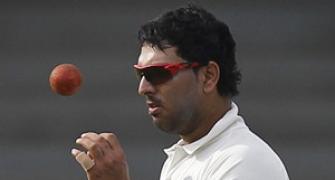 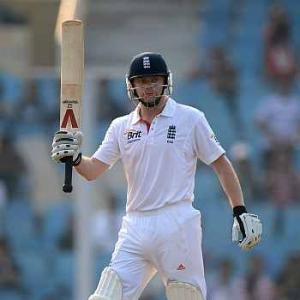