Ishant is top wicket-taker for India this year

Statistical highlights of the fourth day's play in the first cricket Test between India and England at Lord's.

# Ishant Sharma (4/59) recorded his best bowling figures against England, surpassing the 3 for 57 in Chennai in December 2008.

# Ian Bell recorded his eighth duck in Tests -- his second against India. 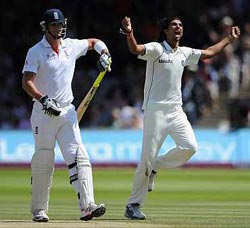 # Stuart Broad and Matt Prior put on an unfinished stand of 162 for the seventh wicket --England's highest against India, eclipsing the 125 between Derek Randall and Phil Edmonds at Lord's in 1982.

# The stand is the second highest by any pair at Lord's -- the highest being the 174 between Colin Cowdrey and Godfrey Evans for England against West Indies in 1957.

# Mahendra Singh Dhoni has become the first Indian wicketkeeper to bowl in each innings of a Test match.

# Prior's century (103 not out off 120 balls) -- his first against India is his sixth in Tests. He has posted four hundreds in England -- three at Lord's and one at Trent Bridge.

# Prior became the first wicketkeeper to post three hundreds at Lord's. In his last seven outings, he has registered three centuries and two innings of 70-plus.

# Ishant Sharma, with Eoin Morgan's wicket, completed his 200 wickets at an average of 29.11 in 57 matches in first-class cricket.

# Ishant's performance of 4 for 59 is his best in the third match innings, eclipsing the 3 for 15 against New Zealand at Nagpur in November last year.

# Broad's first half-century against India is his seventh in Tests. He has recorded all his fifty-plus innings (one hundred and seven fifties) in England.

Cairn may have to be bulldozed to accept norms
Temple dedicated to Sachin, Dhoni in Bihar soon 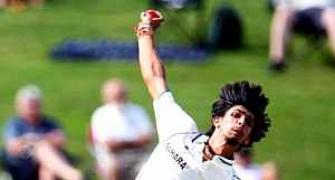