Fortunes fluctuated in the dying minutes before rain forced the fourth one-dayer between India and England to end in a dramatic tie, allowing the hosts to clinch the five-match ODI series by taking an unassailable 2-0 lead in London on Sunday.

Chasing a competitive target of 281, England were 270 for eight in the 49th over when the rain played spoilsport, forcing the umpires to abandon the match, much to the dismay of a capacity crowd at the Lord's.

Play was held up twice because of brief showers, once with India leading by two runs, and on the second occasion England ahead under the Duckworth-Lewis rule.

But the quick dismissals of Graeme Swann and Ravi Bopara (96) in the penultimate over, just before the second interruption, ensured India managed to tie the game.

This is the second time an ODI match between the two sides have ended in a tie in recent times after the World Cup encounter in Bangalore earlier in February.

England were served well by Bopara who scored his runs off 111 balls and struck six boundaries, but his dismissal in the penultimate over deprived them of a win.

Bopara bent down on his knees to sweep Munaf Patel but could not clear Ravidra Jadeja at deep midwicket as a brave innings came to an end.

A delivery before Bopara's dismissal, Munaf ran out Swann as the Indians broke into celebrations, but rain had the final say.

While there is still a match to go, the hosts have pocketed the series as they have won the last two one-dayers after the first match was abandoned. 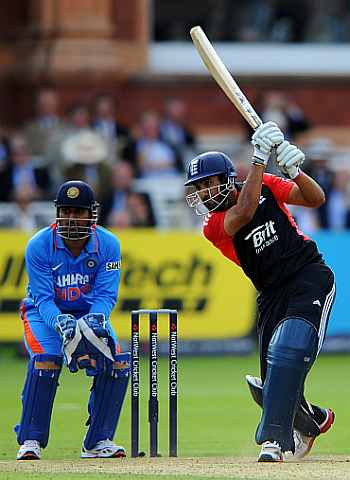 A slight drizzle in the 44th over forced the players into the pavilion but they were soon back as the rain stopped almost immediately. England were 233 for six at this stage.

England opted for the batting powerplay in the 44th over and scored nine runs to be 242 for six. It now began to rain more steadily and the game was stopped again. The hosts, at this stage, were ahead by two runs on the D/L rule. In overall terms, they needed 39 runs from the final five overs.

After a 10-minute delay, the rain again stopped and play started soon without the target being revised.

On resumption, England pushed on the pedal, taking 10 runs from the 46th. Needing 29 in the final four overs, England scored 10 in the 47th.

RP Singh bowled a good 48th over, conceding only four runs but 14 runs from the final 12 ball still appeared pretty gettable. Importantly, England still had one over of batting powerplay left. But two quick wickets followed by another interruption seemed to dashed their hopes of scoring a win after being in a tricky situation.

The hosts were in trouble at 61 for three as RP Singh and Praveen Kumar gave India the advantage by prising out Alatair Cook, Craig Kieswetter and Jonathan Trott.

However, Ian Bell and Bopara offered resistance as they put on 98 runs for the fourth wicket to keep them in the game.

But what really gave England the fillip was the stand of 47 for the sixth wicket between Bopara and Tim Bresnan. Swann then scored a brisk 31 off 26 balls before falling prey to Munaf's direct throw off his bowling.

Much before that, Bopara picked Ravichandran Ashwin and Ravindra Jadeja for boundaries in the 18th and 20th over, before Bell made the most of a RP short delivery by pulling the bowler in front of square. Bopara then ran Munaf to the third-man boundary but, despite his effort, England could not finish off the match.

Earlier, skipper Mahendra Singh Dhoni (78) and Suresh Raina (84) led a superb Indian fightback with brilliant half centuries as the visitors posted a competitive 280 for five.

Put into bat, India were wobbling at 110 for four in the 26th over but Dhoni and Raina resurrected the innings by sharing a record 169 runs for the fifth wicket in 23.5 overs to give their side a defendable total.

The duo joined forces after openers Parthiv Patel (27) and Ajinkya Rahane (38) gave the team a cautious start, with Steven Finn and James Anderson extracting bounce and movement from the pitch.

After the departure of Virat Kohli and Rahul Dravid in the space of four balls to off-spinner Graeme Swann's first over, it was left to Dhoni and Raina to build the innings.

They avoided playing extravagant shots from the overs between 22nd and the 36th. But after that, both opened up.

Raina hit Finn for two consecutive fours and then Dhoni launched a Swann delivery for a huge six to take the score to 171 for four at the end of 40th over.

India took batting powerplay in the 43rd over and after that it rained fours and sixes. Anderson bled 18 runs in the 44th over and Broad was hit for 13 in the 46th. Raina punished both the bowlers for a six each.

Dhoni hit Swann for a six and a four and then punished Broad for the maximum, while Raina gave the same treatment to Anderson with consecutive fours before he was out to Finn. 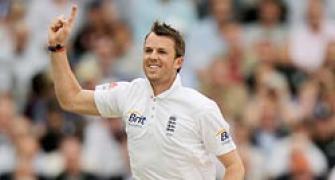 We have to beat India in India: Swann 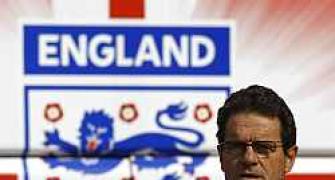 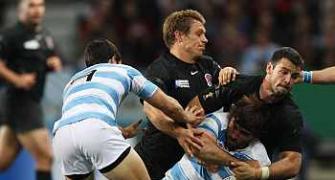